So many "anthology" websites for thought about writing exist that I don't pay much attention to them.  This story arrived that way but is demographically relevant, though I won't be 80 until next year.  The article is worth reading and then I'll reflect after that.

Quote from the article:  "After the image of a 92-year-old woman, vital, working, came into my head, I began seeking out an old-lady canon. When the image of the woman didn’t go away, I wrote a novel around her. It wasn’t female aging that fascinated me as much as I wanted to swing into the viewpoint of a woman who had lived a long complicated life, deeply occupied by her work. I began to think of my book as a coming-of-death novel. The Germans, I thought, must have a word for this (as it turns out, they do: reifungsroman, literally, “ripening novel”)."

My aged mother is on my mind these days, as a role model and as an influencer.  She was part of the demographic move of America from small farm to small town to big city, while I've deliberately gone in the other direction.  This story begins in Portland, OR, where I was educated mostly by old women at Vernon Grade School and Jefferson High School, both examples of "exceptionalism," the conviction that we were the best.  Starting in 1945 and ending in 1957 when I left for college in Chicago, many of the female teachers were single because of war or because the Depression made marriage impossible.  They had high ideals, sometimes threw in with other women, and were hardly victims.  Rather, "hardy" victims.

My mother lived to 89 but her mother and maternal grandmother died as young women.  Her grandmother, a cherished Cochran daughter in a prosperous pioneer family of the Willamette Valley, died of childbirth infection.  The necessary stepmother was harsh and belittled my mother's mother, mocking her for having "horse teeth".  Her teeth were painful trouble but through help, maybe from friends in the downtown Portland Baptist Church, she spent enough time in the big city for them to be corrected.  Her daughters inherited the teeth.  One of my last acts for my near-death mother was prying out her full set of false teeth.  She was comatose.  I'm not sure it was the right thing to do.

My grandmother's beginning family was in Idaho, growing small fruits, where she married a Pinkerton, a defiant and energetic man her father didn't think was good enough for her, though he sounds rather like her father.  Hot-tempered.  Full of schemes. 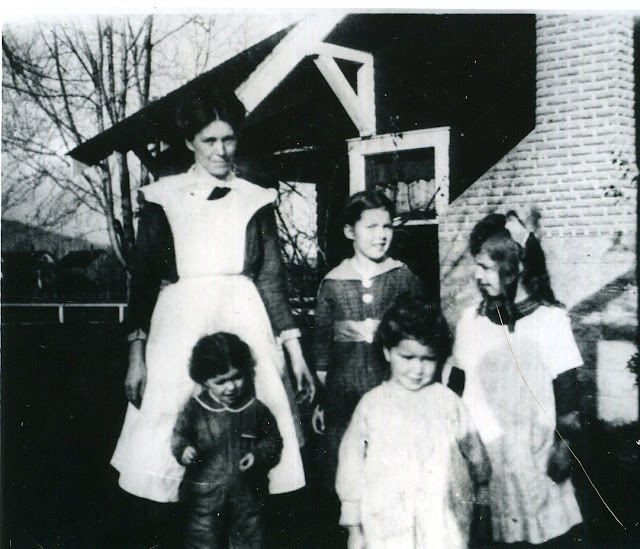 Ethel Cochran with Lucy, my mother, alongside.
In front, l to r, Aliene, Helen and Vera.

Here's my maternal grandmother as a young mother.  My mother is the oldest daughter.  The husband tried to conceal his disappointment at not having sons, saying his girls were as capable as boys.  My mother could drive a nail straight.  I don't know how much education she had.  I don't know why there were no more than four daughters, no infant losses that I know of but a gap between the older two and the younger two.  Abdominal cancer killed her, possibly of the female kind.

So my mother never had a role model for aging except through the media and then as a "professional woman" working in small Roseburg, OR, businesses with older women.  My grandmother and mother never wrote anything or aspired to, except that my mother kept a diary for a while.  She had a terrific fight with someone but tore out all the relevant pages.  Lifelong she was a social conformist, but never hesitated to oppose individual injustice.  She loved the stories of visiting missionaries and late in life took trips to Asia.  A male Filippino neighbor, a young artist, was close to her.

I think that in trying to mold me into the woman she wanted to be herself, pushing against my natural demonic independence, she created the person I am now.

"Late works in literature and art are often more radical, mysterious and profound, given that the creator, finally free of conformity, is brushing up against their own mortality. Now more than ever, we need to engage with these women, evolution’s wild ones, who not only survived, but managed to make world-altering work while they were at it."  Did I?  Dunno.

The list presented in the article emphasizes both defiance and very fine writing.  Those are my priorities as well, but the old women I see as my "type" are late Colette and Gertrude Stein.  That is, sadder but wiser females whose cynicism is matched by relish.  We don't get excited about sex-based fiddling.  We reach for the biggest picture -- the many and surprising arrangements of cultures across the centuries, the complexity of today which can barely be followed by our media, the illusion that anyone could ever design a perfect world.  Where I differ is by being solitary, without partner or community.  It makes me a little distant.  Sometimes a bit elegiac.

Diana Athill (from the article) is in three YouTube vids and they feel "right" to me.  I'm not the sort of withered, crumpled, needy old person often portrayed, so it's good to see Athill looking fine.  In fact, my mother looked okay: a little slower, her hands a bit deformed, often tired, but not very wrinkled, no collapsed face.  She was a sharp dresser.

Culturally, I've made transitions my mother never knew existed, but her experience informed mine.  That is, she compensated for her passive husband so became strong and a leader in a way she didn't expect but should have.  Something like that happened to me: I thought I was attaching to someone in order to help him and have shelter, but found he was willing to take that and ask for more than I had to give.

Interpersonally, my mother never thought of me as a daughter as much as a subsidiary of herself, "owned" -- exasperated when I didn't obey,  I seemed to her to be a sister, named for Helen (killed in an auto crash as a young teen), and then (per Freud) calling me Vera when I didn't behave (that was her sister closest in age) and Aliene when she was feeling affectionate (that was the youngest and most lovable sister).

When I exceeded her, as by going to U of Chicago Div School, she was enraged, partly because she was afraid for me -- I was getting above myself.  Then, because I stepped out of the conventional rural Presbyterian frame, she couldn't even understand what I was talking about.  (She's not the first to be baffled by deconstructionists.)

What I never understood until recently is how she assumed and supported "boys against the girls," a phrase often used then.  My two brothers were simply a higher form of life in her unconsciousness.  They were not shining heroes -- in fact, after his concussion the younger brother lived off her, which made her restless because she had had other plans, but she couldn't solve what to do with him.  Neither could I.  Anyway, both boys resented me.

The most daunting failure was that she never understood my writing, neither why I wanted to or what it meant or how skillful it was.  When I wrote short stories about the rez, she read them sceptically and said afterwards that she hadn't expected to be moved -- but was.  Big deal to me.  The real writing was after her death because without meaning to, her estate set me free to move back to the prairie, writing on the fringes, never being a "Montana writer" which is a category mostly about sales.  But fulfilled as an old woman.

Posted by Mary Strachan Scriver at 7:58 AM