"Winter is coming!" is the cry of the people in "Planet of Exile", an early (1966) novel by Ursula LeGuin almost short enough to be called a "novella."  It is one of three "Hainish" novels about the same setting in something like George R. R. Martin's strategy and presaging the Earthsea works.  Since I just bought the compilation of Earthsea stories, "The Books of Earthsea, The Complete Illustrated Edition", I thought I would use the many little paperback versions I've bought over the years as packing for my Christmas gift box.  I still had a lot of paperbacks left over and "Planet of Exile" was one of them.

I hadn't remembered what it was about and wouldn't have seen it the way I see it now: a "learning" novel addressing a classic pattern.  Many are defining the Nixon years as a precursor and pattern of Now, showing that we learned nothing.  But LeGuin learned quite a lot that persisted.  Among the major issues of the Sixties and Seventies, many remain.  The stigma of classes, the danger of major demographic waves -- this one in the book due to the need for seasonal migration to avoid winter -- human pair-bonding as a way to hold a story together -- the persistent yearning for real communication as in empathy.  There's more.  They often showed up on "Star Trek" but not so much in "Star Wars" which was more about action.

In this story "races" are not only real but "species" which are defined by the boundary of conception, a species cannot produce babies with a different species.  (Neanderthals are no longer a different species!)  The modern problem of declining sperm counts is part of the story.  Of course, the love story is cross-species.  Color comes into it, both skin and eyes.  The domestic species (okay to eat) sound like sheep, there are no horses, and no wheels except once a little glitch as a cart with casters.  The "snow ghouls" sound more like dinosaurs (great big haunches and short arms, many teeth) than the zombies in "Game of Thrones."

Things are only slightly made strange, using images from medieval war (catapults) and the American indigenous (cradleboards).  One phenomenon I liked was the practice of pounding rocks together while sitting in a circle-group of governing elders, replacing the American indigenous practice of passing a pipe around or the Afghanistan ceremony of three cups of tea before beginning.  "Rock pounding" replaces drumming, but a pattern is said to emerge out of concatenation before successful talking begins.  I'd have made something of the circle of rocks left after talking, something like tipi circles, but LeGuin does not.

The war scenes are familiar with the addition of subterranean tunnels and the travel on roofs familiar from Japanese and Chinese movies.  No gunpowder is mentioned and no bows and arrows, but poisoned darts and the previously unsuspected infection of wounds, which proves to be the clue needed to reveal that the species are growing together, thus erasing what had been prejudice.  There are no woman warriors, but females are brave and helpful as support.  Named characters are said to be old, but no children play a part except as "brats", the word used to refer to kids.  They're always around but not as individuals. 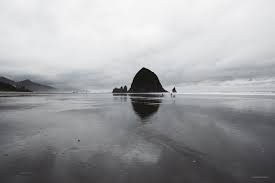 What moved me most was totally unexpected.  Reading the first chapter I gradually realized that it was a description of a trip I've taken many times and I'm sure LeGuin has as well, since she lived in Portland and loved the beach.  It's about traveling over the Cascades, where so many trees were killed by the Tillamook Burn, much like the recent catastrophic California burns, and arriving in Cannon Beach.  The "Stack" which is described as a high black fort reached by a soaring bridge with no railings is actually "Haystack Rock," iconic and familiar, standing in the water along miles of sandy beach.  This is a reminder that fantasy and sci-fi always begin with reality, both socially and as a scene.  LeGuin doesn't disguise reality very much, often just adding a syllable to the ordinary name of something.

The deeper archetype of both LeGuin and Martin and many other creators of coherent worlds as a stage to consider our own times is the period in history (European) when the tall-masted wind ships became powerful and steerable enough to dependably visit other far away countries, some islands and some the double-continents of the Americas.  The wonder of finding other people so different they seemed like new species and the amazement at new foods and animals is still working through sci-fi and fantasy.

The coming of winter is a European preoccupation and the memory of invasion from northern hordes, whether boat-borne Vikings or steppe galloping Scythians, remain vivid in song and story.  The Europeans had little knowledge of places without seasons and still yearn for them.  The obsession with walls is also a very old one going back the first domestication and the ability of villages to store food -- only to be raided when the Civil War northerners descended on the South, still remembered bitterly and politically.

The Gaal (Gaul?) coming through, famished invaders, remind us of the Caravan supposed to be invading the Hain, though this is a fantasy written decades ago.  It is a source of today's fantasies about those south of us, ravaged by our drug cartels, trying to escape and not accompanied by warriors in spite of all the scaremongering.  The attacks on the displaced at our borders -- wrenching away their "brats" and caging them in tents -- is much worse than anything in this story.

The Hain planet is double, the seasons are extremely long, the kinds of people are more sharply various, and the intimacy of love is fulfilled in the ability to enter each other's minds.  In spite of the killing, it is from a time when people advised "make love, not war" though not in Vietnam -- yet.

When I lived in Portland, I half-expected to see LeGuin in the feminist bookstore we both patronized.  Once we were on the same airplane flying down the Pacific Coast, which looked very much like a map of Earthsea.  She's gone now, physically, but still very much with us and I needn't explain how.
Posted by Mary Strachan Scriver at 12:17 PM