WHERE DO STORIES COME FROM?

Gitting’s excellent essay on “Women & Wheat” gives a good accounting of the mythic structure and origin of the “grain goddess” cults and stories, making clear the deeper meanings that give them a religious significance. But this old tale of Demeter and Persephone has been revived and rewritten many times, just because it is an archetypal set of forces: mother trying to save daughter, who sees life very differently and is vulnerable to danger. These days, with drugs and sex nearly overwhelming us, the story has even more relevance and power. I have a former roommate who has been working on a version since college years, involving a “Mort Lethe” who was a professor. She, of course, was Persephone. Her “take” on it is very psychological and poetic, since she is a poet and a Progoff journal adept.

But I’m attracted to Westerns, out of fashion though they may be, and anyway, I’m living in the middle of both coal and wheat country, both of them life-styles and industries at the same time. There are little coyote mines close to here and I’m inclined to mark their locations in case natural gas gets too expensive. Meanwhile friends near Great Falls are fighting hard to prevent the construction of coal-fired electrical plants and the governor of Montana is fighting just as hard (with considerable more funding) to promote a big coal gassification project in eastern Montana where “there isn’t anything anyway.” Except some other friends of mine who happen to love their landscape.

The struggle with wheat now is over genetically altered seeds which are “Roundup Ready,” meaning they will not be killed easily by the carcinogenic herbicides used to kill weeds, and patented seeds that will not produce seeds, so they must be bought again every year instead of using a percentage of the previous year’s seeds. Already the “Roundup readiness” has drifted into the genes of objectionable plants and the patented seeds have pollinated adjacent fields so that the companies sue the ranchers for hijacking the genetics. In the meantime, bugs die -- bugs we like and want -- and seeds that were never tested for safety get into the food supply. Then there’s low-till seeding, which eliminates ploughing and the powerful “plowing=fucking” metaphor so much a part of the Demeter myth.

Except in the dimension of fertility in the fields, role models for Demeter and Hecate come easily to hand in my mother’s family of formidable women. My mother was halfway through college (she wanted to be a math teacher) when her father came home one day with a big mule, a plow, and a sack of seed corn. “Lou!” he roared. (He had no quiet voice and my mother, whose name was Lucy, was always called “Lou” and told she was “good as a boy.”) “Lou! This is your next year’s tuition. If you can get a crop of this in that lower field, it’ll be enough.” So she did it. She never much liked mules after that. In the end her father took part of the money to feed the family. From then until her marriage, aged thirty, she worked in town and turned over part of her wages to the family.

Mort Lethe was a little more problematic (my grandfather had a kind of boyish innocence in the midst of his bombast.) I’ve known plenty of powerful, driven men in my time -- some of them Unitarian Universalist ministers. I, of course, am both Persephone and Cory. Crossroads is a little black mare that belonged to Connellys here on the reservation. Toby? Hmmm. Hard to know exactly where that Tobacco Man came from. Too many possibilities. Hop, likewise.

My background in Greek mythology is not from schooling. As a child I went almost daily to the nearby branch library (Vernon, for those who might know, closed decades ago). After I got through “Make Way for Ducklings” and the Chinese brothers who stood on top of each other to keep from drowning (Blossom? Hop?), I started on the fairy tale section, then plowed on to the myths and legends, until I had exhausted the children’s room and the librarian took me around the corner to the sci-fi, where I lingered a long time. By the time I got to seminary in middle age, I’d been reading Campbell and Eliade. In this way I went back over the stories, the same stories, always a little deeper, from a little different angle.

Even so, as I’ve been working on this story, I’ve been Googling, which has taken me into ever richer territory. Try it yourself: Google up Ceres/Demeter, Hecate, Pluto/Hades, Persephone/Proserpine and so on. Find the black horse, the black dog, the Sacred Grove with the spring in it, the baby who didn’t become immortal, why the mare is named “Crossroads,” and all those John the Baptist and Jesus precursors whose names began with “J.” Lots more. I slipped things around a bit. “Serb” from “Serbia” is a silly play on Cerberus, the guardian of the Gates of Hell. Still, a high school or junior college could get a pretty good English paper out of deciphering this story. Or might even enjoy writing a play or video of it.

For the coal part, especially down in the mines, I happened upon a remaindered book (sometimes I felt rather guided when things came to hand so easily) from the U of Nebraska Press: “Regulating Danger: The Struggle for Mine Safety in the Rocky Mountain Coal Industry,” by James Whiteside. It’s much easier reading than most of such books, which tend to be for people who like technical information. It includes a photo of a draft mule going pell-mell down the tunnel. 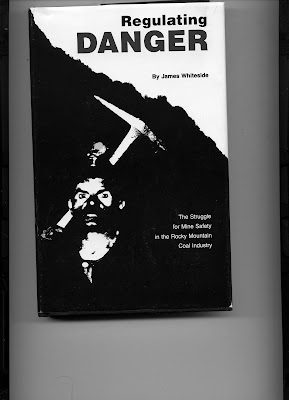 My intention is to let this story cool a while, then go back over it carefully, polish and tighten it a bit, then publish it on Lulu.com. One thing I’ll be looking for is whether I’ve kept to my “style” or “approach” or whatever you want to call it. I find I’m evolving a plot-based focus -- as opposed to interior monologues or author-spoken information -- what happened and then what happened and then what happened next. But I also find it helpful to work from a predetermined structure, like a legend or a time-table or a newspaper story. And I’m also quite happy with objects that can carry a little symbolic or poetic weight, like that statue in Mort Lethe’s study of a dead baby with its chubby white hand hanging over the edge. And though I’m not big on period detail -- the kind of gun is SO important to some guys! -- I do like to know how things are done, like cutting grass and hauling it along on a length of canvas. I mean, I might actually DO that.

One of the ideas in the back of my head is always who might want to read such a story. I’m thinking it might be useful for people trying to teach mythology to comparatively unsophisticated readers -- no one who is reading the myths in the original Greek! But some of this stuff is a little racy for junior high -- THEY won’t think so, but their parents might, especially in a conservative community that detests “Deadwood.” Still -- high school, junior college, state university... along those lines. Women like this story, naturally enough.

As I said, this state is in a great debate over the best use of land, so this story could be a great classroom entry-point into discussion of the issues: coal versus wheat, industry versus agriculture. Only recently have we realized that industrialized cropping depletes the land as much as open-pit mining. No one gets away with clean hands.
Posted by Mary Strachan Scriver at 12:13 PM

"A high school or junior college could get a pretty good English paper out of deciphering this story. Or might even enjoy writing a play or video of it." I favour the latter, of course, what with my brain tilting toward the metaphoric. I also wonder if (and live in the hope that) these personal efforts to re-examine and retell such a myth aren't akin to re-sowing from organic seed. I certainly prefer it over the usual Hollywood "Roundup" variety of myth.