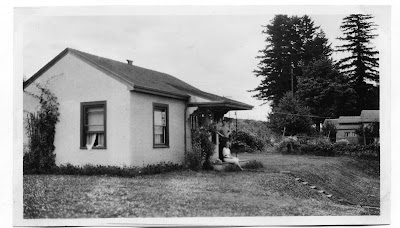 When S.S. Strachan (my grandfather) bought a big old garage suitable for the new Kozy Kamp folding trailer plant, already this tiny cottage was at the back of the property. May & Doc, both working in the “plant,” claimed it for their own. I’d guess it was about twenty-feet square, so small that to take a photo of one room, one had to stand in the other room and shoot through the doorway. But they loved it -- it had that magical playhouse quality that some of us enjoy so much. It was as big as many of today’s housetrailers, and it had some nice little touches like the porch overhang and the climbing plants -- a rose, probably. Anyway, it was the first place the two of them lived privately in “their” house. This place is NE Cully Boulevard in Portland, which is one of two diagonal northside “market roads” that go from fields and farms directly to the center of Portland. 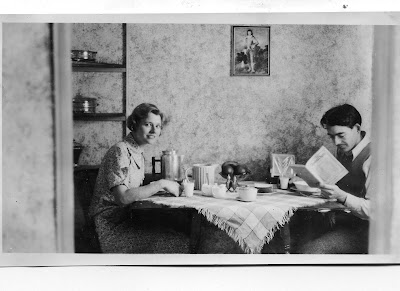 Of course it was handy to go home for lunch. I think that’s “Blue Boy” hanging on the wall. Another of those nice little drop-wing tables and a rather French pot frame behind May. Doc has discovered how to deal with his photographer brother-in-law (my father): read something until the fussing is over. In this case he has “Reader’s Digest.” Looking at this tabletop more closely, I think the meal might be breakfast: bowls, cream and sugar, and that toaster. It’s the kind where you hold down a little spring- loaded flap, put in the bread, and when you think it’s about ready (like, smoke rising), open the flap again and put the other side against the electrical element for its turn. 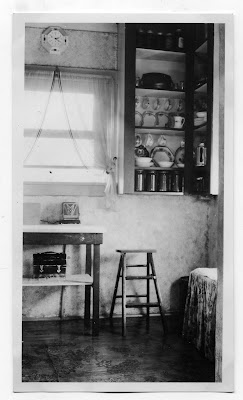 Every house needs a stepladder. It’s one of my most useful bits of furniture, though I need mine mostly to get to the top shelves of my book cases. This table may have been homemade. There’s that toaster again and another vital object: the metal lunch pail. I’m puzzled by that clock, since there weren’t battery clocks then and I don’t see a cord. Could it have been a wind-up clock? If the time is right, it’s not breakfast -- maybe it’s just decoration. Canning is standard domestic practice for people in those days.

I’m not sure what the “ruffled cretonne” decorated object is to the right. Table? Sink? It seems a bit soft-topped to be a table, but maybe there’s just a folded cloth on it. The walls appear to be in need of paint or paper, so the couple must not have lived there long. These two were diligent and skilled at dwelling improvement. 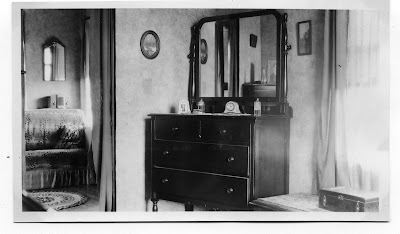 This time the major furniture is a dresser. Very nice. Photographer ought to have given the drawers another little push. Another clock -- this one says 2PM. Nice to have so many mirrors. I suspect a raid on the SS household. There’s also a chest, what used to be called a “hope chest” or at our house a “cedar chest” siince that’s what it was made of. Looks like maybe a jewelry chest on top. So this photo was taken from the bedroom, pointing out at the little loveseat. 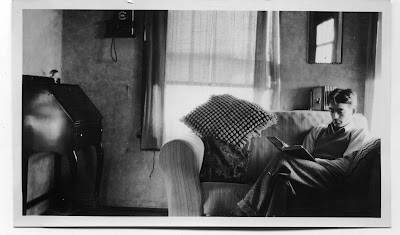 Maybe this loveseat is homemade. A car seat with added arms? We don’t see those nice little lady’s drop-front desks around much these days. I can’t tell what Doc’s reading, but he seems to be making pretty good progess through it. The window sports a spring-loaded draw shade, one of my fond sense memories from summer days. They were yellow canvas, treated somehow -- shellac? -- and flopped softly if the breeze could get at them. Nice radio there. And a handy wall telephone! Very modern: dial, no crank. I don’t know who made those fancy pillows, but I’d bet it was a family member and they were proud of them.

After WWII when work in the shipyards and a doctor's office had filled up the coffers, May and Doc built a house far on the other side of Portland, on the west side of the West Hills, in what was mostly undeveloped land. Since then the house has become surrounded by upscale homes. Built on a hillside, it has a daylight basement with an apartment which was meant for Mrs. SS (May’s mother). The house is now occupied by May and Doc’s daughter, Jeannie. Jeannie and Sid’s son Dean, his significant other Erin, and their daughter, “Lola Rose,” have just moved into the basement to take a respite from high rent while they finish college degrees. So that’s four generations who have gone in and out of this big expandable house, from Beulah to Lola. But it wasn’t easy for two people to squeeze past each other in the tiny rooms of that first Cully Blvd. house.

Times change. Customs and loyalties often don’t. May and Elsie were pillow pals from when they met in Manitoba until their nineties when they still called each other on the phone in the middle of the night when rates are low and old-ladies are wakeful. Elsie is just now slipping away in a hospice near Santa Ana. As Elsie Mackinnon Strachan, she once saw her poems published in the Saturday Evening Post and Arizona Highways. She never met Lola Rose. 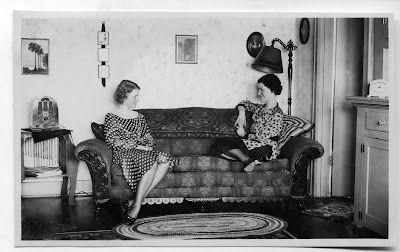 Posted by Mary Strachan Scriver at 10:39 AM

We still have some of the furniture you pictured! Thanks for the multi-generational look at the family and the expandable house. The elders would have loved Lola Rose. Moi

I loved this post - the photos are just breathtaking, really.

Something about the era; life was hard, but a lot of family photos from that time seem to depict a softness, an understated comfort.

Can't quite put my finger on it.