At the back of this lot is a decrepit old garage/workshop where bats live this time of year. Bats separate by gender for the summer, the females creating a nursery and the males finding smaller hiding places, maybe in a tree hole. I’m not sure whether I’ve got a nursery out there or not, but it’s my suspicion that I do because sometimes there are very small bats dead out back on the old carpet where Squibbie mauls her prey. This year I laid all the ladders over on their sides, hoping that this will prevent bat assassination, but I’m not entirely successful.

In fact, a couple of nights ago I took an allergy pill so I could breathe through my nose while I slept -- I know, it would be simpler to boot the cats out of my bed, but I need a little cuddling in my life almost more than breath. Anyway, it meant that I slept heavily so when Crackers started batting something around that kept flying up the open window inside the screen, I thought it was a miller moth of which there are a lot right now. When I use the computer at night, they come as though magnetized. (That might really be the case. Have to read up.)

The next morning, this poor creature-toy was wadded up on the floor. I spread it out, but I didn’t look at it too much or too closely. I just put it on the scanner. I tried to put the cat on the scanner but she wouldn’t stay there and cat belly fur is not that interesting anyway. (Jokes.) So maybe someone out there knows much more about bat genitalia than I do and can make a diagnosis. 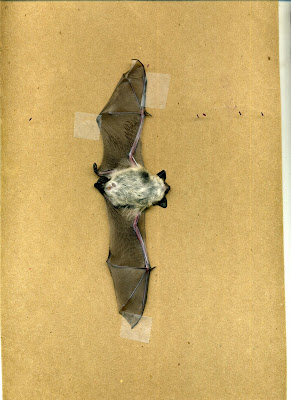 The first summer I had the cats they brought in bat after bat. What I hated most was when their silken wings were torn so badly they couldn’t fly, but they were still alive and making a sound so high one could barely perceive it. Once, as taught by animal control, I had scooped up the little creature in a paper cup with a bit of cardboard over it and could hear the scuffling in there. So I took it out of town to a creek with tall grass where bugs were flying around and dumped it out. When I looked back, it was crawling up the grass stalks. I hoped a predator, maybe a fox, would get it.

Back at animal control the veterinarian would have killed it and sent it in to be checked for rabies. He was a little cavalier about bats and kept leaving bat corpses on our lunch sandwiches in the fridge until I gave him an old under-the-counter fridge for his meds and critters. But when I got rabies shots for these cats, the veterinarian here wasn’t just cavalier -- he was almost resistant to the whole idea of checking for rabies, even though we were under a rabies quarantine at the time. A dead rabid raccoon had turned up. But evidently little brown bats rarely carry rabies, though they do carry bedbugs and tapeworms. Wait, BEDBUGS???

In Portland someone ran a check in the West Hills which showed that ten per cent of the bats from the caves up there (I had no idea there WERE caves up there) were rabies carriers. We officers all got vaccine shots, but only the young and the healthy had titres that went up, which led to a lot of teasing of the old guys. By now I doubt that I have any antibodies left. They tell me that if I’m bitten by a confirmed rabies carrier, the treatment is enormously expensive but fail-safe and that in most states, the health department will pick up the tab. I hope that’s true.
*
But that’s not really about the bat. Back east the bats are falling prey to “white nose,” a fungus that kills them while they hibernate in caves, dropping dead from the rocky ceiling. Little brown bats are the most common kind but now they are killed in such great numbers by this predatory fungus that they are beginning to be endangered.

Among “myotis lucifugus,” the formal name, the bats mate in the fall, the female receiving more than one inseminator and holding the sperm in her uterus until towards spring when she releases an egg and begins to grow it. She migrates back up north to my workshop attic and the babies begin to grow, for three weeks staying attached to the nipple whenever the mother is present. No rooting around or shoving to get a better nipple. In the fourth week, mom brings bugs to junior. In the fifth week, mom and junior go hunting together, just as mama cats teach their kittens. After that, the kid is on his own.

Here’s some interesting stuff from the website called “animaldiversity.com,” a terrific site. I ought to pretend I discovered all this from carefully studying my specimen, but it was someone else.

“The skull has some distinguishing characteristics. Myotis lucifugus lacks a saggital crest, has a shortened rostrum, 38 teeth, and a upslope profile of the forehead. In addition, the braincase is flattened and subcircular when observed dorsally.

“Myotis lucifugus does not possess a keel on the calcar and has a short tibia relative to the length of the hind foot (~55% of the tibial length). Myotis lucifugus lacks choroidal papillae and folded retinas, and therefore does not exhibit eye shine.”

It’s eyes don’t shine -- that’s kinda sad. But it can hear a gnat burp at a hundred feet. Here’s some stuff for cocktail parties but probably not dinner parties: “Mating occurs in two phases: active and passive. During the active phase, both partners are awake and alert. In the passive phase, active males mate with torpid individuals of both sexes; passive phase mating is approximately 35% homosexual. Mating is random and promiscuous.”

“Upon female struggle, the male may emit a copulation call to ease the female.” “Trust me!” he shrills in his tiny voice. (Not really.) “Males play no role in parental care.” (Is any bat surprised?) “Where’s my support check?” she shrieks. (They call this anthropomorphism.)

Little brown bats are fond of my yard and buildings (they use the attic of the house, too) in Valier because I have a lot of trees and I let my grass get long, so there are a lot of bugs. Of course, the bats are not fond of the cats. But they like to eat mosquitoes, which makes me like bats. Just not in my bed, please. And hold the bedbugs. There are limits to this web of life thing.
Posted by Mary Strachan Scriver at 4:54 AM