THE ART OF THE CALGARY STAMPEDE 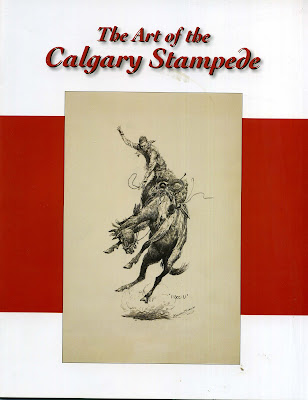 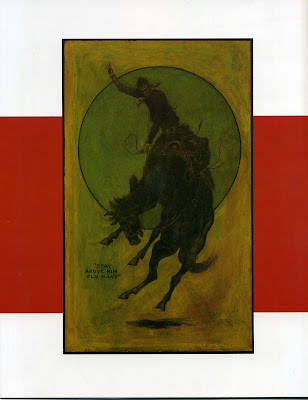 “The Art of the Calgary Stampede” is the catalog accompanying a show curated by Brian Rusted at the Nickle Arts Museum in Calgary. It’s not just that I so appreciated the lunch Brian hosted for myself and the U of Calgary Press staff at a VERY fancy restaurant after I gave a talk about “Bronze Inside and Out,” my bio of Bob Scriver. (I felt as though I’d wandered into a scene from “Sex and the City.”) It’s not just that he continues to understand what I say about Western art and, more importantly, WHY. It’s not just that he carefully reads Brian Dippie’s work, which I consider the most penetrating commentary on Western art, “even though” Professor Dippie is Canadian. In fact, maybe a main feature of my appreciation for Brian Rusted is that he IS Canadian! The American Western art melee is, well, shall we say “undignified?”

Things just happen in the world, sometimes for no obvious reason, and then in hindsight show a clear pattern. Thus, the Calgary Stampede has been a precipitating crystal that has gathered an audience interested in Western art, and therefore potential customers. California’s Ed Borein (1872 - 1945) became the trademark artist for the event which used a sinuous image of a saddle bronc rider atop a sunfishing horse, variously called “Scratchin’ High” (a reference to spurring, which is meant to be high and vigorous), “I-see-u” (is that a poker reference?) or “Stay Above Him, Old Hand.” The iconic image exists in several media, including a bronze called “Bronc Twister” by Rich Roenisch, an Alberta sculptor. (Roenisch is listed in the invaluable reference website called AskArt, but needs to have a bio added as do several other Canadian artists mentioned here.)

In my mind, which is centered on the Sixties, Charlie Beil (1894 - 1976) is the definitive Stampede artist because for many years he provided the trophies for events. Brusque and busy, Beil tried to escape mentoring other artists, but if someone captured his attention by doing good work, he immediately set to work as a mentor. Charlie Russell had done for him as he in turn did for both Bob Scriver (1914- 1999), whose best and early recognition was in Calgary where his rodeo series found a home at the airport, and later Jay Contway, also a Montana figure who provided trophies. These artists were participants in the Western life, not just studio artists. Scriver had known Beil when the former was a child and the latter was an itinerant cowboy in East Glacier Park, paid to meet the Great Northern train whooping and shooting. But Beil also taught both men to be dependable businessmen. Jay Contway has for years sponsored a significant art show, “Friends of Jay Contway,” in Great Falls as one of the cluster of art auctions around Charlie Russell’s birthday in March. (In the Sixties I taught school on the Blackfeet Reservation while Contway did the same; he is about my age.)

Rusted notes that the early exhibitions associated with the Calgary Stampede were framed as education entwined with competition and commerce. Exhibits of high school student work featured scholarships as prizes. Trying to separate art as being so elite and ethereal that it needn’t consider monetary success is useless when dealing with Western art. There is always a ranch that needs to be saved and, like bronc riding, selling art is one way to do it.

However, as time passed and the more “poetic” and aesthetic artists appealed to the growing sophistication of Calgary folks, there was a drift away from cowboy artists and subjects. Luckily, the new artists included Gissing (1895 - 1967 -- an impressionist landscape artist of enormous charm), Rungius (1869 - 1959 -- a painter of game animals and a good friend of the Beils, who looked out for him in Banff), and Grandmaison (1892 - 1978 -- a fine portraitist of Native Americans). Today the artists related to the Calgary Stampede include people who weren’t born yet in the Sixties, so I hardly know them. As is a continental phenomenon, the Native Americans, like Annora Brown (1899 - 1987) or Dale Auger (1958 - ) supply the abstract paintings, while the “cowboys” stick to the figurative. In the Thirties the rising popularity and increasing skill of photography drew it into the category of art.

Rusted says that he resisted accounting for the Stampede art in terms of a narrative line of names and dates, partly because it implies an unjustified story of steady development in a single way when it was actually the result of interacting forces, sometimes local and sometimes continental. The goal of developing local pride and identity has always grappled with continental forces of popular culture and economies. Alberta is a wealthy province in which the aboriginal population has considerable political clout, which is a unique situation. And yet the high-and-dry geography that Wallace Stegner felt defined the West extends from far north to far south, even into Mexico. Stegner himself lived on both sides of the Canada/USA border.

As centered on individual achievement in the context of a defined place as both art and rodeo must be, they are an important source of humanistic interpretation to account for how such phenomena arise and what they might mean. In the case of celebrations of the West, there has been an abiding historical consciousness, awareness that the frontier was already disappearing in 1900 -- Time’s arrow slaying a way of life that could not persist. Both rodeo and art, in spite of all the accumulated accouterments of modernity (e.g. light shows and rock music to introduce bull-riders or online bidding wars for auctioned masterpieces).

The general and global art market still anchored in Paris and Manhattan do not quite realize the existence and potential of Western art in spite of its explosive development in the American Southwest. Brian Rusted’s advantage is access to a relatively unrifled trove of materials in a place not so pressured and corrupted by the drive to “get rich.” And yet there is an abundance of evidence magnetized by the Calgary Stampede, well worth organizing. Rusted has expressed some optimism that the show at the Nickle Arts Museum, Libraries and Cultural Resources, at the University of Calgary might be expanded both as gallery exhibit and as manuscript. I sure hope so.
Posted by Mary Strachan Scriver at 10:27 AM