I’ve been offline for a week.  Here I am again.  I resurrected these glasses from the past because the new fashionable small lenses are bad for computer work.  In the summer I am a ruddy person as you can see.  And skeptical.  And aging.   A little goofy. 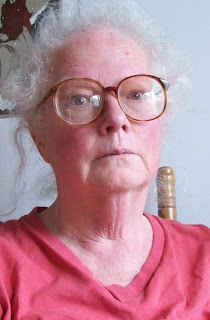 Mary, I don't comment often, but I always read your blog - I have come to need it, I guess.

Thanks, Dona. Great Falls is never going to have as high class a mayor again! I'm flattered that you "read me"!

Seeking meaning, the big picture of everything, the little picture of what our lives mean, if anything. Sometimes meaning seems to be there, sometimes we just construct something. Like throwing a rock in the water, hoping the ripples go somewhere, mean something to someone somewhere sometime somehow.

We live in interesting times. The Chinese take on it is a curse, but Americans are enthralled with "interesting." I have a few books I want to put down on paper. I am no longer full of illusions on that this means. I look at dusty used book stores, some crammed with decaying books no one ever read.

For those that have kids, that had kids, that becomes the meaning of why they lived. For those of us who didn't we have to find another thing. Besides, even having kids isn't a sure thing for making meaning or a mark in this world, if one really understands Job or Ecclesiastes.

Ultimately, we do what we do, because that's who we are, and that's what we are left with, because we really can't do much else. Free will is a cultural construct, and a central myth in this society.