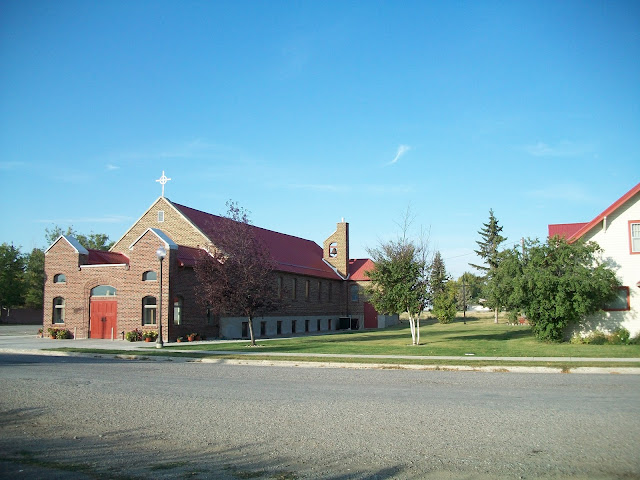 The Valier, Montana, Catholic church is one-hundred years old.  Sunday evening, in the midst of a world of strife and alienation, the members came together Sunday evening to consecrate an addition to their brick building, which was begun in 1937 in the midst of world crisis.  This is what it means to be a people of faith: a community of hope aligned against destruction.  It’s not a big flashy church.  The architecture is classic.  The families are sturdy.
But over the years the congregation had aged and the entrance, going up steps necessary so that the basement social hall could have windows, was a little difficult to negotiate for some.  Thus a practical addition would provide a foyer and an elevator.  Though the original church had been built by local artisans in the congregation who knew how to make things square and sturdy, in the case of rebuilding the entry they thought of an architect and found a unique one.
Bill Grant and his wife, Anne DesRosier, are partners in Ad Graphic, a small business on the Blackfeet Reservation, currently located in Browning, Montana.  Both come from families with pioneer roots in the area and both are devout Catholics.  Ann is an enrolled Blackfeet.  Bill’s ancestor was involved in the history of Lethbridge, a couple of hours north on the Canadian side.  Anne is a birthright Catholic and Bill took the Rite of Christian Initiation for Adults after marrying Anne, who feels he was strongly affected by his guide, Sister Edna Hunthausen from the remarkable “peace-focused” family.
Thanks to Frank Lloyd Wright, church architects in particular are often seen as flashy and experimental artists without much regard for practicalities, like a roof that doesn’t leak.  But Bill is “grounded” in his work and though he had help for the early heavy reconstruction, he spent a year carefully finishing -- not just finishing but also perfecting.  Here he is, down on his knees mixing epoxy for some tiny detail the day before the consecration.  Daily for a year he made the hour-long drive down the Rocky Mountains.  He works in silence -- no radio blaring. 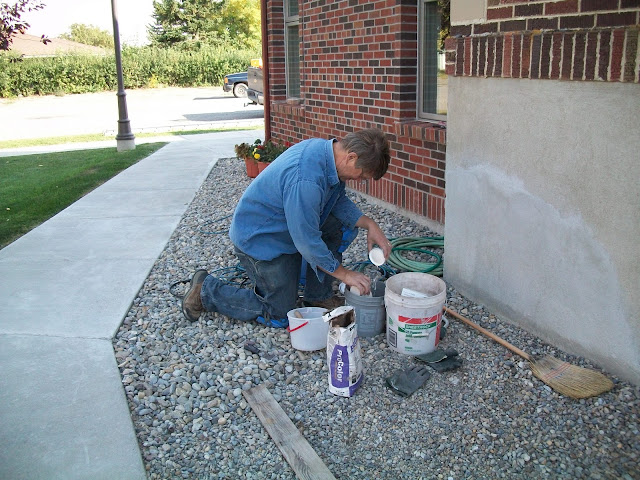 The Cardinal’s homily was a review of the history of the Parish, drawn from the church files.  Most of what I know comes from “Harvest of Memories: Historical Events of Valier, Montana,” an account of the founding and families.  Here is a quote:  “St. Francis Church was built in 1909.  In the planning of the Valier townsite, land was set aside for a Catholic and non-Catholic church.  Church records began in 1911 when Father Francis Joseph Shevlin came as the first resident priest.  Baptismal records show that he ministered to the people of Augusta, Choteau, Dupuyer, Williams and Valier.
“It was in 1913 that Father Day, a native Belgian who was vicar-general of the Diocese of Helena made a trip to Europe and brought back thirteen families from Belgium and Holland, eighty people in all. . . .The church was ready and blessed in 1914 by Bishop J.P. Carroll.”  World War I was just beginning.
The life of St. Francis Catholic Church in Valier was yoked with the Sacred Heart Mission of the Belgium Settlement in Williams, ten miles away, where mass was said in “Belgian,” which might have been either French or German since Belgium is a rather bilingual country.  That old Church still stands and the graveyard next to it is still tended.  In the early days the priest arrived from Valier in a buggy, or if there was snow on the ground, a bobsled. 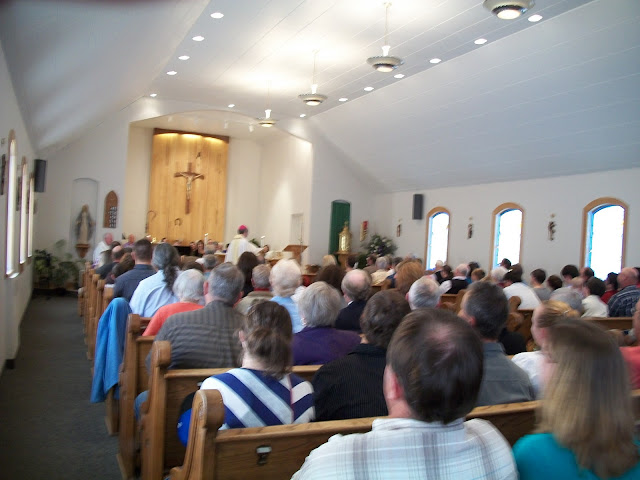 These days the congregation arrives in pickups and the priest must serve almost as many parishes as in the beginning.  There is no longer a resident priest in Valier.

The irrigation project that supported the community economically is still in operation.  Wheat is the mainstay and thus the windows claim that theme. 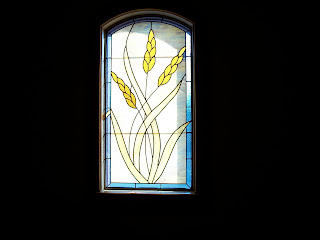 This a simple and elegant place with surprising details, like this cherubic face. 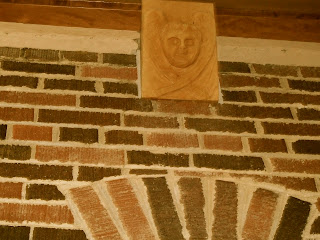 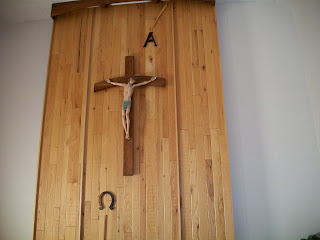 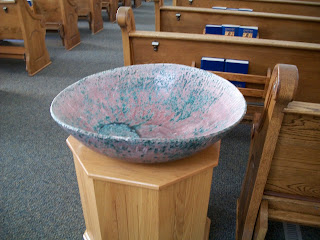 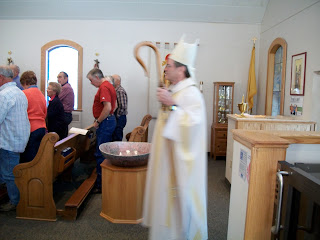 I do not attend this church, but I was made welcome here.  I attend the church under the large dome of the big sky.  In fact, I interpret this large stained glass window at the rear of the church to be a depiction of my church. 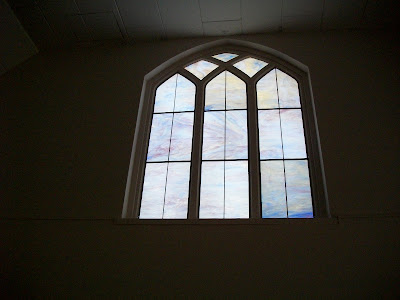 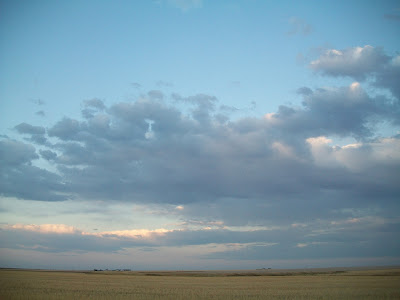 There is no contradiction here: both are manifestations of Creation.
Instead of a wooden closet for confession, this church -- because of the addition -- has a simple room for "reconciliation" where person and priest sit on chairs face-to-face.  I suppose one might interpret the two peaks Bill Grant created at the entry in those terms: a dialogue about the sharing of both Creation and Reconciliation. 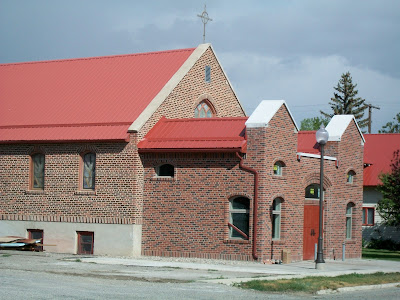 Posted by Mary Strachan Scriver at 11:09 AM

Mary, do you have any idea where the brick might be from?

I have a query in to the architect, Darrell. My hard drive crashed back a while, so I don't have an email for you. I'll post the answer here. Sources for building materials are always interesting. The sandstone for the Holy Family Mission buildings were cut out of the nearby buffalo jump bluffs. The church and the original hospital in Browning were built of fieldstone which the Blackfeet brought in by horse and wagon. They are rounded, glacier-carried stones of various colors.