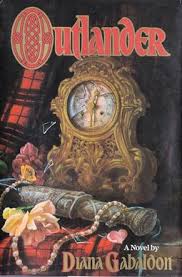 Before anyone was fussing about “Game of Thrones”, my cousins were enthralled with “The Outlanders,” the Diana Gabaldon series about a Scots woman who had gone back in time and was involved in clan warfare over the Scots throne.  Though the series is basically a romance thriller, they were so anxious to include me in what they took to be actual events in our shared Strachan past, so significant to our family identity, that they actually sent me a little green iPod with the story on it in audible form, read by a woman with a seductive but (luckily) intelligible Scots accent.  I enjoyed it.

But I was shocked.  The books, written by a biologist who knows sex and murder when she sees it, the plots were packed with S/M, perversion, violence, herbal witchery and miserable living conditions.  My cousins said they just skipped those parts and read for history, but I didn’t see much history.  What they valued was the importance of family (clan) and salvation by love.  It’s not hard to see why our family history in the last few generations since immigration from Scotland had taught us to believe in our superiority over others as a defense against poverty and hardship as well as a kind of helplessness about economic matters.  Pride in education traced back to Scotland, but didn’t show much understanding about what a high "intellectual" education might be like.  Not that I knew either until Div School and beyond. 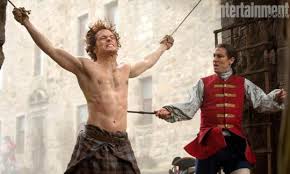 Hero tortured by villain -- those are not swords Jamie is holding -- he is suspended.

Do not mistake me.  I’m not a print snob.  I will read anything about the worst stuff: torture, genocide, destruction of vulnerables, and so on -- but not with the idea that they are necessary or tolerable or that they can be skipped over or that our family never participated in such abuses.  It was through considering what I read, acting to get a “high” education, and trying to understand how to effectively oppose what -- for lack of a better term -- must be labeled “evil,” that made me a “justified outlier.”  (Until then I was just a rebel without a cause except self-protection.)   Some of the attitudes and practices I reject and oppose are part of my cousins' lives -- mostly worship of status, obsessive secrecy about small difficulties, and constant insistence on control.  Fawning and cooing will not turn me away from trying to at least think these issues through -- even sometimes to act.  So much fear, so much willful blindness. My mother's family was Irish, American since the 1600’s, and not afraid of a scrap.  (“Albion’s Seed.”)  My Scots cousins are secular, but moral in the most respectable Protestant way.  No drinking, no smoking, no cursing, no nightclubs, no gambling.  But no church.  Ever.  Except one in-law, late.  Their children began to explore the edges.  My cousins forgot that my grandmother’s horror of alcohol came from family susceptibility until they suffered the consequences in their own children. (I still don’t drink.  Some of them have a horror of sex.  I don’t.  I just have a horror of responsibility for children.) I went looking for edges: Indian reservations, art, law enforcement, religion and writing.  I think about sex a lot, not as a practice but as an identity, a biological function on the cellular level, and a force in society.  I think about brain function and sanity.  I think about creating a body of work, thought-work.

Scotland is a darker country.

I did not marry into a tribe: I married another outlier with a Scots cultural identity, whose family was always fondly trying to draw him back into conformity, away from his career as a sculptor.  (Success destroyed our marriage which taught me to avoid success -- not sculpture.)  In the end of ministry I didn’t fit my denomination, though it represented itself as welcoming outliers.  No denomination or congregation can accept many outliers without losing its existence --  constant challenges and perforations and exceptions will destroy the boundary.

The UUA is no more tolerant of dissenters and nonconformists than the Catholics.  UU clergy are no more obedient to high standards of personhood.  Nor are any other theoretically privileged categories like doctors, lawyers, Buddhist priests, generals, college professors or Native American ceremonialists.  Status no longer means obligation to a higher standard.  The deflation was meant to be a kind of leveling in the name of democracy and it succeeded. 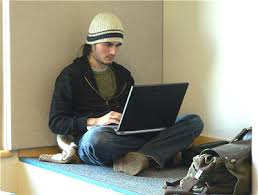 I live in a small town as an outlier who is morally careful about not challenging the consensus boundary, though I try to have a bit of influence without interfering.  Diana Gabaldon and her understanding of biological communities would see that if I destroyed this community, it would damage me, because it is their grudging willingness to tolerate variance that makes the little niche where I dwell.  Yet they tolerate me, not because they approve but because they do not understand me.  I might challenge their ideas, but I’m reliant on their consistency.

In other niches on the internet I am also an outlier, but in a more mutually understanding way:  circles of environmentalists, tribal members from across the continent, religious thinkers, and social activists in the most perilous and reviled contexts.  I am a hunter-gatherer of ideas among them without signing up for membership. 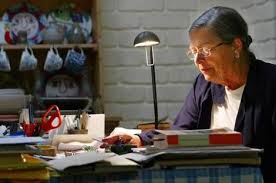 There is another niche that I look at from afar with amazement and sometimes disgust.  Mass publishing is the most misunderstood business in America.  Once attached to upper-class Euros and then the romanticized Transcendentalists of New England, it is now occupied by people who want a steady stream of narrative that won’t scare anyone while being outrageously sensational in the most brutal ways, always winking -- in shades of gray.  The business model is the lowest common denominator with the highest gross profit, which often comes from big numbers with small margins, the dimestore model.  It is arts exploitation, forcing individual expression into forms to sell, and supplying false flattery.

To be published, writers must present manuscripts ready for print and agree to promote them.  Publishers are only advertisers, if that.  More like handlers.  Writing is a kind of personal obsession possibly better handed off to arts that demand less skill.  Publishing, with a few exceptions, is the manufacturing of highly seasoned, morally fattening soup.  No one reads the books, except those romantic women and idle men who run narrative through their brains without any retention --  unnecessary since it’s all repetitious fantasy anyway.

But blogging exists in a sort of limbo where no one can find anything without tracking skills and already knowing the territory a little.  Partly academic, partly wild-hare, partly deeply personal, blogs might be sound, image, and/or word, any language.  It’s wonderful for outlier writers, in spite of the relentless attempts to industrialize writers into commodifiable groups, partly by constantly changing the terms of service. 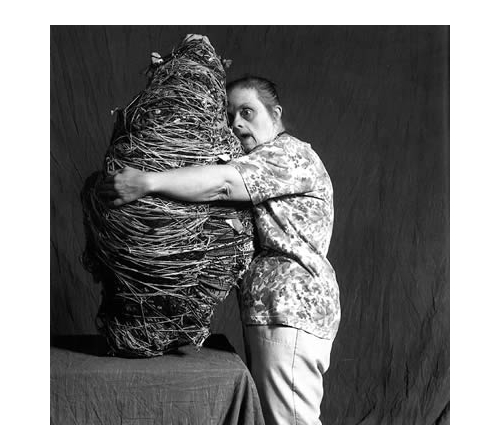 There’s no status, no reward, no profit and therefore no door-keepers, no unwanted editing, and no reputation.  Just the pure pleasure of driven writing.  If someone should read it, so much the better.  Someday a form of true publishing -- that is, an interface between serious writers and serious readers -- will form again.  Probably not in my lifetime.  I'll save what I can.  The secret of every blog is that someone somewhere is always saving everything.