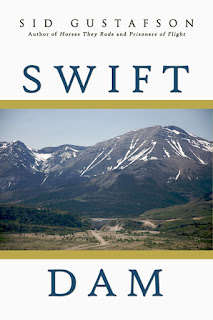 A TABLE OF CONTENTS

1.  Rain:  The set-up begins, the “Water Dream.”
2.  Water:  How Swift Dam was built in Blackfeet vision dream country.
3.  The Black Bag:  Moon drivers and car sleepers, a demanding son.
4.  Spirit:  The story of Spokane, a famous race horse.
5.  Pavlov:  Relationship between Bird Oberly, sheriff, and “Fingers” DVM.
6.  Luck:  “Mardo” brings in the quilled dog of “Riel Du Pré.”  Some will guess who these people really are.  How a vet became a writer.
7.  Medicine:  About Pondera County livestock practices.
8.  The Storyteller:  Mardo comes through as an agent.
9.  Recapitulation:  Surgery under the moon.
10.  Sun:  Sleeping in the street, in broad daylight.  Doctor Sally Jo’s intervention is nearly a seduction.
11.  Shine:  Interviewing the vet’s wife, Maple, leads into an early rescue story from above Swift Dam.
12.  What Horses Know:  How “Fingers” tried to save his friend Ivan and at least brought back his body.
13.  The Living:  Bird Oberly makes a double discovery.

When it comes to books, one of the more stupid on-going literary wrangles is about what is true and what is “fiction”.  Stupid, because stories are always mixtures of the writer’s experience and the underlying structure of the world.  Neither one is known or knowable, however entwined they are.  But is it convincing?  Does it move us with passion and regret?  Does it recommend strategies for survival?  This one does.

Especially in a place which might be called the East Slope of the Rockies, the Blackfeet Reservation, Pondera County, the Crown of the Continent, and so on, the fancy names hide the fact that around here success is really more of a narrow escape.  But it sure does encourage the circulation of blood.  It’s healthy if you can keep moving, which is also the secret of horse health.  That and a bonded buddy.

The best novels, however one defines them and judges them, include the knowledge of something we’ve known little about on the level of expertise that the practitioners have.  Consider “Moby Dick.”  In this novel Moby Dick is a monumental rebuilt dam and the special knowledge is about horses and veterinary meds and instruments.  Flesh of several kinds.  The Gustafson family is full of veterinarians and in fact Rib was our veterinarian in the Sixties, when we presented him with the challenge of bobcat kittens and pet badgers as well as horses and occasional rodeo stock used as models. 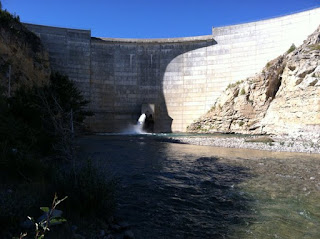 Sid’s father Rib was colorful.  (Sid is, too, but in a different way.)  Imagine Max van Sydow.  He was very much a family man and when he and his wife had aged, his children — Sid, Kris, Erik, Barr and Wylie — put their careers on hold and returned to the area to care for them.  A few years ago, when Rib realized that I was friends with Sid, he took me to lunch to see what I was about.  Of course, he was also curious about my marriage to Bob Scriver.  We had a good time, telling stories. 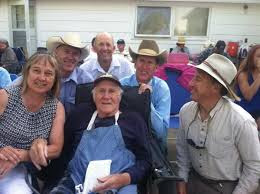 This book makes it clear, as though it weren’t before, that Sid’s “life-problem” has been dealing with his father, wanting to be allied without being crushed.  For reasons of his own, Rib sent teenaged Sid out to be a range rider/cowboy with Billy Big Springs, a massive Blackfeet Indian whose allotment turned out to have an oil well.  Billy was a second father and took that seriously.  The effect was much like Bob Scriver being sent out as a teenager to the Jim Stone ranch where Mrs. Stone, Blackfeet, took him in hand.  The result in both young men was a yearning affinity to Blackfeet life that cannot be challenged or thinned.  But they were somehow unsettled for life.  Neither found a partnership with a woman that lasted.

So this novel has in its guts something about marriage.  There are two married men, a veterinarian and a cop.  The cop is young enough to have been the veterinarian’s son.  (The vet’s son is named Ricky.)  Both have faithful, fulfilling lives in spite of the often interrupted time of such jobs when emergencies come often, at night, without warning.  I love the description of the veterinarian (called “Fingers” which is the nickname of Sid’s musical brother who did NOT become a vet) returning home chilled and aroused from doing surgery under the moon that has resulted in a new creature being given life.  He comes into the marital bed where his wife is just surfacing from the warm pool of her dreams, her flesh slightly swollen, and embraces her with shared love. 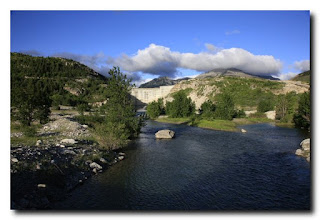 Some of these vignettes have been published as short stories, one of them being about Fingers’ habit of sleeping in the shadow of Swift Dam, which stands like some monument to hubris and human industrialism, ignoring the life-ways ended, the suffering, the little rule-bendings.  This leads to the narcolepsy of aging, sitting behind the wheel of his big old-fashioned car at the only stoplight in Conrad.  The book is dedicated to Rib and is clearly in part a reconciliation with his death.

The Macguffin of the plot, to use Alfred Hitchcock’s term, is the medical black bag with contents so secret but potent that locals imagine all sort of contents, esp since they seem to be kept in the bank safety deposit at least part of the time.  They think drugs.  Some speculate money.  None quite understand Fingers’ fascination with Swift Dam, even knowing that his best friend, Ivan Buffalo Heart was killed in the flood.  Fingers took pack horses and rode along Birch Creek’s flood plane until he found him, tangled in debris in a tree, and took him tenderly home to his wife, Tess.  There’s more to it than that, but you need to read the book to find out.

Since modern books constrained by time and money have stopped including a Table of Contents, I supplied my own at the top, sans page numbers.  It’s a small paperback, 150 pages, but complete and coherent in spite of its many layers.  It is packed with poetry, lyric images. 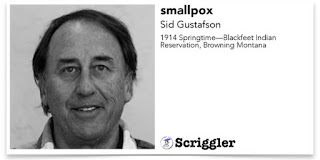 A short story in which "Stuf" is based on Bob Scriver.

Sid’s stories are sometimes printed in small magazines composed in back bedrooms where they suffer from bad proofing.  This book has half-a-dozen malapropisms, the sort of thing that escapes spell-check and perhaps many readers.  None of the misfired words are among the Latinate medical terms or the cleverly trademarked drug names, or maybe I just couldn’t tell.

I had not heard before the term “orographic lift” which is the term for the contraction of water-laden air struggling up over the mountains, off-loading rain or snow, to become a catabatic warm wind on the other side where it can expand again, creating a rain shadow.  The country of the “Chinook Arch” is one of the most apt and evocative names, a kind of empty blue rainbow that is full of sky.

Alongside the hydraulics of the land, “Swift Dam” is driven by psychological dynamics older than Freud or even the Greeks.  Father and the oldest son of five share a vocation except that Sid expanded his to include thoroughbred racing horses, which brought him into a strong moral culture advocating against treating animals like machines, injecting and confining them out of greedy convenience.  He has a gut-level affinity for the old ways of buffalo hunters.  Rib also wrote, but only small local books illustrated by his wife.  This novel begs for a screenplay.