"HORSE RACING IN AMERICA": A Review 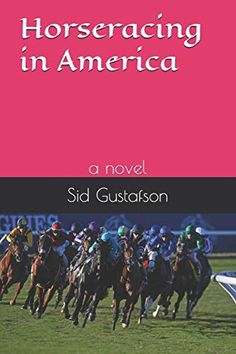 Sid with his hand on a horse.

This book was not at all what I expected, though it is exactly what the title, “Horse Racing in America,” says. It is about the scandalous treatment — MIS-treatment — of race horses who are routinely destroyed because of running drugged on broken legs.  Oddly, there is no single horse who is the focus — rather, the animal we follow and fear for is a dog.  Not just any dog, but a rez dog.  In fact, I’m sure I’ve seen “Cowboy” on Sid Gustafson’s websites.  He and I are both in the small category of white writers closely associated with the Blackfeet reservation over decades.  We crossed trails in the Sixties when Sid’s dad was our veterinarian.  The story called “Smallpox” is in part drawn from Bob Scriver.  http://www.sidgustafson.com/disc.htm#.Xr6W1C-ZNoQ  Lots of photos here.

I’ve followed Sid’s writing for many years and reviewed previous books.  I smiled to see he’d managed again to get Billy Big Springs into the story, a physically massive mentor of Sid’s whom I also knew, but not so closely.  Consult https://sidgustafson.blogspot.com/2016/05/#.Xr6ReC-ZNoQ which is a previous review about a different book with the same internal story-drive.  Writers work this repeat, trying to resolve the inexplicable again and again.

This time the reader is led through horse anatomy, particularly legs, and the drugs used on horses, not so different from the drugs we have all become familiar with these days because of human addiction. Encagements of horses’ heads with bits and tie-downs elaborated to control the horse have the ironic effect of making breathing near-impossible, especially when running.  The cruelty and attempt to control made me think of a medieval woman who spoke too much, even as they led her to be martyred by being burned alive. When she continued to shout to the crowd, her captors screwed her tongue to the top of her mouth.  These days Euros don’t use such methods, which have remained part of the American obsession with control.

Reading this book during current political developments  means it echoes with bribery, mafia schemes, semi-legality, evasion of regulation, perversion of science, and pretensions of grandeur.  But that’s not what shines through all this machinery.  I’m not sure that even Sid realizes what he has written, as much in his subconscious as his intentions.  It’s again as extraordinary as “Moby Dick,” the detail and passion of obsession so strong as to be seen as madness.  In this version Sid names it “Dominion.”

“Dominion came to haunt me, much as it had come to haunt Vallerone.  I despise the liberty man has taken with dominion over animals.  His animals. Ha. Folk desire dominion over goodness, and absurdly, dominion over all living things.”  It’s in the Bible.  But in the novel it is tied to veterinarians specifically through Herriot’s use of a Bible quote for an epigraph of a book later than "All Things Bright and Beautiful", a book called "Every Living Thing":

“Be fruitful and multiply,
and replenish the earth and subdue it:
and have dominion over the fish of the sea
and over the fowl of the air,
and over every living thing
that moveth upon the earth.”
(Genesis 1:28, repeated again and again)

Today this dictum has been thoroughly challenged, not least by women who defy domination, which is why the second veterinarian character, the protagonist, is a defiant idealistic female who has a daughter rather than a son. The two veterinarians share a happier plot line, but it is not about falling in love — rather the search for identity, the hunger for meaning.   Often Sid repeats his horse mantra, which is freedom, foraging and friends, as true of people as animals, as natural to the rolling grasslands of the rez as to the sea. This is not abstract, told in jargon when necessary, slanting metaphor when that works.

Much of the plot plunges briskly through the chapters by means of repartee.  Abandonment of quotation marks works here without confusion, easily visualized, which suggests a translation to a movie, except that such a move would lose the lyric passages about place, which are crucial to the sense and senses of the story. Memories of the Montana east slope stand in contrast with the shore of the New York Finger Lakes where Sicilians run casinos that make living animals into electronic signifiers, bookkeeping wealth too easily manipulated.

Locating Vallerone’s incarceration in a Veteran’s Hospital means that men are as much victims of national dominions as are women, as much destroyed by territorial industrial revolution war as animals are by distorted competition.  But there’s little lecturing on the obvious.  Just the overwhelming inner drive to understand what to do, to obey the compelling need to make the maimed whole again or at least give them dignity.

I looked up "Sleipner Publishing" and discovered that "In Norse mythology, Sleipnir (Old Norse "slippy" or "the slipper") is an eight-legged horse ridden by Odin.  Sleipnir is attested in the Poetic Edda, compiled in the 13th century from earlier traditional sources, and the Prose Edda, written in the 13th century by Snorri Sturluson."  In other words, a horse of the gods, ironically more pedestrian than Pegasus, but, wow, can he run!  Sid doesn't forget he has a Norse thread.

Somewhere I once read an anthropological report on a Blackfeet woman's specialty as a "horse doctor."  When the men came back from war or hunting, exhausted and possibly wounded themselves, the women took the horses to water and clean and a particularly skilled woman checked each one for wounds she would pack with healing herbs.  I think Sid read it, too, but I don't have a reference for it.

Don't underestimate this book, but don't forget that Sid provides many nonfiction work on the same subject.

Posted by Mary Strachan Scriver at 8:25 AM

At 80, Mary’s eyes and ears are keener than anyone’s younger, a true champion of Indians and their animals, a hero for our times.