DAYS OF HEAVEN ON THE PRAIRIE 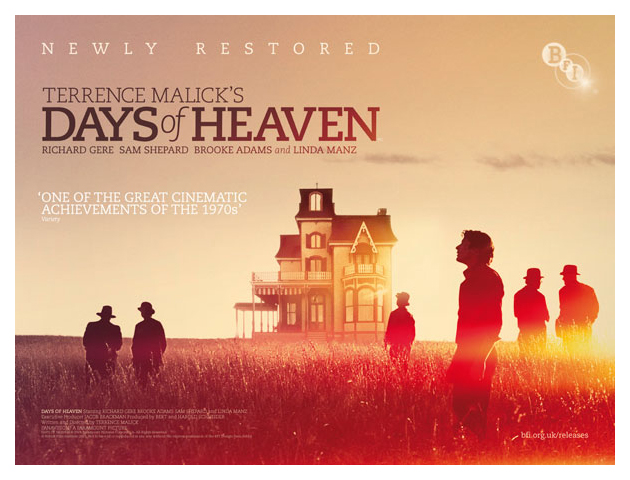 Well, heck.  I think I’ve finally grasped the electrical and dazzling true nature of the world and existence and I open the door to all this wonder . . . and everyone is already there, calling to me and inviting me to watch a vid about Terrence Malik.  Here is a link to it:

If all that talk just leaves you cold, try watching these short advertisements he made for Guerlain.  The secret of attachment to life is through the senses.  (I once wore “Mitsouko”.  There are stories. . .   not now.)

Of all Malik’s films, the one closest to my heart is “Days of Heaven” which was filmed mostly just north of here and in the time of my grandparents who homesteaded in South Dakota and northern Manitoba.  I never lived in Alberta but there are many connections.  Edmonton Unitarian Church published a book of my “sermons” focused on the land.

Oddly, it is the Humanists who have responded to this broad and enduring set of ideas not about God.  Especially in Scotland where Process Theology, an attempt to reframe Christianity in the terms of quantum mechanics, gave it a good try.

The American Humanist Association has always jostled alongside Unitarianism.  The trouble with small congregations with incompletely developed identities is that they become platforms for strong personalities.  That has happened to both institutions and has kept them from responding earlier to today’s Great Sea Change which is due to the new understandings provided by science.

I’m not good at knowing the major philosophical platforms of Western Thought and the people (mostly men) who represent each, but the vid linked at the beginning of this says that Malik was impressed enough by Heidegger to translate his book, called in English “The Essence of Reasons”, published by the Northwestern University Press, my undergrad alma mater’s publishing arm.  I like to think of the title as “Scented Logic,” combining the senses that connect us to the world with our individual brain-building identities that give it meaning.

That’s for religion wonks.  What I see happening in practical terms is that Christianity has been based on congregations of like-minded people — sometimes the mega-thousand meetings of the prosperity stand-alones and sometimes the quiet non-owning fellowships of UU or Quaker circles.  That is, “religion” is defined as “denominations” (named entities) as much by their way of organizing as by their “beliefs.”  The Southern Baptists next door to me have congregational “polity”, the same as UU’s, but their belief systems are diametrically opposite.  Both of us are legally accountable only to ourselves, but our idea of who we are is diametrically opposite.

In seminary a Konkoyo priest from Japan lived in my same building.  He was always impressed that I was so un-Japanese, so noisy and messy.  I asked him what church was like for him, knowing that it did not entail big meetings, the kind that are now blocked by the pandemic.

He said that he went to the temple and waited.  If someone came, they brought him flowers or food.  The two of them would sit together while the person presented their worries and doubts.  Then he would tell them what they should do.  The model was our understanding of therapy and much dependent on the sacredness of the priest, who was a genetic descendent of the founder of the religion.

Maybe another good model is the group of twelve or more Jewish men who gather to study the Torah, with the choice of scripture to focus them.  Early Christians gathered as “house churches” and the layout of altar (butcher block used in sacrificing) and baptismal font (watering pool) grew out of that.  Other more primal People might gather in standing up circles, even dancing and singing.

This is the element that the new “belief systems” about the awe of the universe and the salvation of sensory connection has missed so far.  If one is inspired by photos online, even at home on the sofa with a loved one, that’s not solidified as a once-a-week event with rows of pews.  Yet it’s quite like prayer, to be alone or with a few others.  Or like hiking together in a spectacular place or sitting together around a bonfire at night.

The content is more likely to be sensory concepts than logical reasoning based on abstracts.  Maybe a story.  The role of a celebrant then becomes guiding thought to what “feels” real and meaningful.  But this new way of thinking may be less like a lecture hall and more like a seminar.  Is a celebrant really necessary?  Or, like Quakers, should those who are inspired be entitled to speak?

The dark side of this — death and the possibility that we’re all deluded about what is valuable — is denied in Christianity which purports to be about individual return to life after death.  Judaism doesn’t address the question, since it is based on community, which persists in spite of everything.  It is quite possible to organize a belief system and even an experience based on the dark truth that we will never really know much of anything and the cosmos is as clouded as it is revealed.  Brains use whatever evidence and experience they have to create meaning.

My thought now is that the congregation is the whole planet and existence on it is continuous, interconnected in every way through the granular code of genomic life and through the electrochemical molecules of stone and sea.  We are arrangements of elements that came from stars and will eventually disperse, only to regroup inconceivably.

So a human individual arises through community and ecosystem, becoming someone built by encounter with the facts of his or her life, and acting in the world in ways that affect that legendary butterfly in Australia as well as the other way around.  One of the things that incline me to observant inaction is a fear of making a misstep that will destroy something valuable in the future, like the time-traveler in H.G. Wells’ story who killed an insect precursor of a whole line of history that produced something bad, maybe Naziism.

This is grandiose on my part, believing that I matter that much.  I must grow where I am planted knowing that I’m just one among many.  But I can write because now there are blogs and and the internet.  Use what you have under this peneplain of sky.

It is a poetry of image.  I didn't forget Malick.
https://www.youtube.com/watch?v=5f6rpDlfX5A

I think religion right now is in its Malick stage.
Posted by Mary Strachan Scriver at 12:04 AM