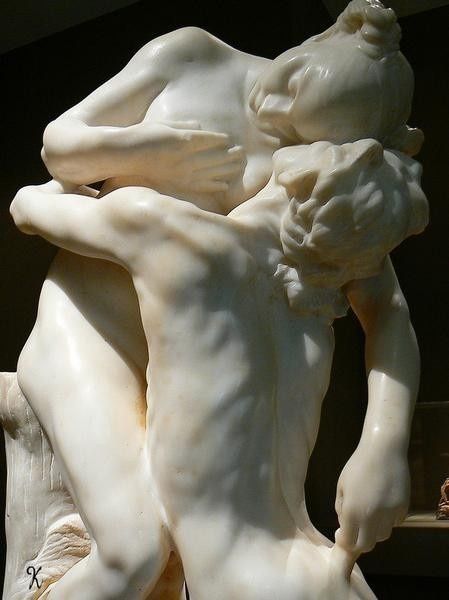 The world was outside their skin.  Each was inside their own skins.  Everything was skin against skin.

She felt safest, most alive, with her head on his arm and her own arm flung over his barrel chest.  He felt strongest, most resourceful, with her head on his arm, though it made his arm go to sleep.  But he learned to roll up a towel and put it just above his arm so the weight of her busy head would rest on that roll.  (The towel is useful later.)

Her head wasn’t busy on the outside — really quite still — but the insides went wild during REM.  He watched her eyelids shift as her eyeballs moved and asked softly,  “What do you see, my heart?”  In her sleep she muttered, “Your heart, heart throb . . . we should make some heart shaped sugar cookies. . . you are my sugar heart!”  He laughed.  “Sweetie,” he murmured.  She smiled without waking.

Skin, shaped by the muscles and bony joints underneath, stretched and contracted back.  He turned his back to her and she wrapped around it, feeling his spine and wing-bones, tucking her arms under his.  He feels her bosom, two soft cushions with a button in the middle of each.

Towards morning, the two roll over in the other direction and now she is flat on her back.  He pats her tummy, thinking of a taut drum top, but the sound he makes is slapping pudding.  He thinks of giving her belly a razzberry, but doesn’t do it, smiles to himself, and goes back to sleep.  She doesn’t wake, but smiles in her sleep.

She dreams he has antlers like a whitetail deer buck, not the body of a deer, but just the antlers with the two curving bases and rising from them half a dozen points, like some Art Nouveau candelabra.  He gestures with his head.  The antlers weigh nothing.

He dreams she is a tree with a trunk as curved as her body, some kind of maple, the crimson leaves being blown off by wind and falling to the green ground, but then a second wind comes and blows the leaves back onto their original twigs, each in the same place, and then the leaves rustle as though laughing. 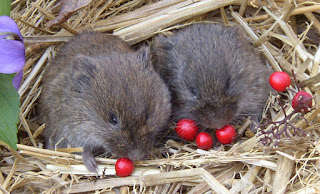 The above is meant to evoke thoughts (and hopefully memories) of pair bonding and bodily relationship that are not based on conflict or humiliation.  It is also a basis for the point already once made by Geoff Main, that inside our skins metabolic-molecular events accompany and possibly trigger what our emotional and mental identities express.

Today’s entry in “delanceyplace.com" is from  The Chemistry Between Us by Larry Young, PhD, and Brian Alexander. who made an inquiry into the phenomenon that “if you separate a pair-bonded male vole from his mate, you'll get a very mopey vole who uses what's called passive-stress coping to deal with the overwhelming anxiety of partner loss. When the separation takes place, this is what causes the animals to feel so bad.”

Bosch checked their chemistry. "The males separated from their mates had much higher levels of corticosterone, a stress chemi­cal, in their blood than did any of the other groups, including voles sepa­rated from their brothers. Their HPA [hypothalamic/pituitary/adrenal] axis was working so hard, their adrenal glands weighed more."

“Passive stress coping” is like depression, lying on the sofa eating a whole box of Valentine chocolates.  Many things in the body work on a cycle of depletion/replenishment, controlling homeostasis of blood glucose, oxygen, and water.  But the more recently emergent physiological loops, as in mammals, work on an “axis” which are more complicated loops.

"But here's the strange thing: both the voles who stayed with their fe­male mates and the voles who were forced to split from the females had much more CRF in the BNST [bed nucleus of stria terminalis] than did males who lived with, or were separated from, their brothers. In other words, loads of this stress-related hormone were being pumped in both the voles who got depressed after separation and voles who were still happily bonded and didn't show signs of passive-stress coping.

"'Bonding itself produces high CRF,' Bosch says. 'But this does not mean the system is also firing.' There is something fundamental about living with a mate that results in more CRF stress hormone in the brain, but that also prevents the engagement of the HPA stress axis as long as the mates stay together.”

That is, whatever gift it is to have a bonded mate, the cause seems to be a suppression rather than an addition.  The first cause of the “high” of falling in love is due to the hormone called dopamine, which is the driver of addiction to every pleasure: nicotine, heroin, sex, gambling, whatever.  This is infatuation.

"[George] Koob, [chairman of the Committee on the Neurobiology of Addictive Disorders at the Scripps Research Institute] agrees. The CRF system is there, he explains, to signal that a loss has occurred and we need to do something about it.”  When rats used in experiments on addiction are given the CRF-blocker used on the voles, they stop being alcoholic.  They get off the couch and go about their business.

The next step is NOT designing a pill that will affect the CRF system.  We probably already have some of those, discovered by trial and error without knowing how they really work.  Rather, we need to discover what it is in our world, the way we do things, the things we consume, that are distorting our CRF axis and sending it spinning off the rails.

I don’t envision a world where we have a blood testing gizmo at the breakfast table to see what our hormones are doing.  Rather, I hope more of us can live with people who love us and who will look closely at us and say, “Let’s take the day off and go fishing!”  Even the memory of people who knew us and did that, even pets, can suppress despair and comfort loss.  Because our inner environment is more than chemicals: it is memory.  That’s managed by the two little “horses” — hippocampus — above our ears.
Posted by Mary Strachan Scriver at 9:53 AM