Many times I assign myself a topic (like the limbic system) and other times just let them happen. Today the topic came in the mail in the form of a twenty-fifth wedding anniversary. I was the officiant. Karen and Jack Hoover (“The Wild Rose and the Prairie Sage” on their invitation) were not kids when they married and they had some bruises. I worried that the marriage might not work because they were people who took care of other people to the point of needy people attaching to them. I was afraid that they’d “nurture” each other to death! It has not worked that way at all -- they’ve been gifts to each other and those around them, including me.

I don’t mean in any material way, but just being there. They were part of the Unitarian “beloved community” in Great Falls but also popped up other places, like at CMR Museum events. When Russ Lockwood, who was my district exec in the Eighties and one of the people who made the Montana circuit-riding pulpit possible, would ask me “which one of these fellowships would you want to serve if we could fund you?” I’d always say “Great Falls,” because it was the one that tied in most directly with my Sixties life on the reservation. He’d always sigh, because he could see that economically the Great Falls fellowship wasn’t going to be viable (and the fellowship DID fall apart), but the one that COULD be viable was Billings and they didn’t love me. Nothing personal: they don’t love any ministers. I never even got to know them because they didn’t sign up for the program.

Not that beloved communities are all wine and roses. The Blackfeet Rez (not just the tribe) remains one of my key beloved communities because it’s where I was young and in love. But everyone fights like cats and dogs. No, that’s not strong enough. People murder each other, cripple each other for life, destroy each other economically. In between they redeem each other, devote themselves to the future, and invent new livelihoods. All is not progress. All is change. Even here in Valier, all is change. Yesterday there were two funerals, one next door to me, plus the homecoming parade and, of course, the big game. Sometimes it’s the loss that’s on top, and other times it’s the gains.

Also in the mail was the newest copy of “The Bloomsbury Review,” one of the few persisting newsprint reviews (bi-monthly) and about the only one that reviews the kind of books I read: NA lit, books by writers in the American West, books about nature and psychology and travel. For instance, in the classifieds is notice of a lecture by Raffaella Ada Columbo MD in Denver about “The Limbic System and Religious Experience.” Of course, she will reveal that Jung knew all about the limbic system all along, etc. etc. but I’m more interested in her strategy than her conclusion. To me, Jung is a lot more help than Freud. More fun, too. But you have to watch out for him. He sometimes took out his payment in fucking and even mind-fucking is risky. That’s off the point. The point is that “The Bloomsbury Review” is coherent and beloved because it was founded by a charismatic and devoted man, plus his family, friends, and patrons. Even when he died, the community and publication went on without him because the flesh-and-blood community had created a “virtual community” of readers and subscribers. ($20 for six issues. The Bloomsbury Review, 1553 Platte Street, Suite 206, Denver, CO 80202-1167. 303-455-3123)

Not in the snail mail but by email I’ve been in contact with Nature Network which is an email community based in England. They are delightful people, but I’m finding their interface, while free, too complicated for an old lady like me. I’m too much of a polymath and too little of a techie: they are meant to serve people prepared to form a subset of scientists around research issues. I would love to live their lives -- I made contact through the similarity of names between Earnest Scribbler and Mary Scribbler. Earnest wears crocs, lives in a house full of animals, and loves verbal whimsy as much as I do, but maybe that’s not enough.

Another virtual community is a small group of boys “at risk” who live together like an old Sixties and Seventies commune, doing their own housework and trying to overcome traumas that most of us never face: torture, loss of family, HIV, addiction. I’m privileged to listen in. Again, there is an adult charismatic male “centerpole.”

My schools follow along behind me, a cloud of witnesses looking for my money. Hopeless pursuit. Their publications also come in the mail. The best are from the University of Chicago Divinity School. The most formal of these is “Criterion” which publishes the texts of speeches. Another, called “Circa,” is news-based. An assistant professor of ministry tells us: “... God-talk’s answerability to God appears incompatible with its answerability to us, such that God-talk is all-too-often called upon both to elevate the status of a particular agenda and to insulate that agenda from criticism. I counter all of this by providing an “ordinary” account of God-talk: by explaining the semantics (meaning, truth, “aboutness” etc.) of ordinary language in terms of the norms implicit in our recognition of certain language-use as correct, and then explaining the sense in which the normative Spirit of God-talk is likewise mediated through an ongoing process of mutual recognition, I argue that we can understand God-talk as a species of ordinary talk...”

Got that? Me, neither. After a bit of reflection, my guess is it means “my God is better than your God” and “smile when you say that.” Or maybe not. This is why I make sure to participate in this community through print: I need time to run for the dictionary. Maybe draw a diagram or make notes.

But here’s why I stick around: 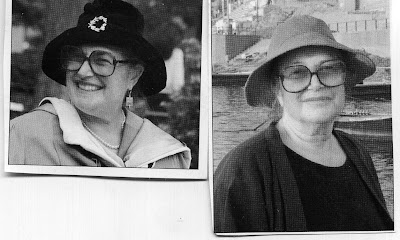 In general, U of Chicago is not a woman-friendly place -- or wasn't then -- but these photos from Circa (which is why they’re screened) are of Wendy Doniger, a formidable and warm person who has made the community her own. She is the Mircea Eliade Distinguished Service Professor of the History of Religions. As the years go by, I fancy I look more like her -- maybe it’s just the glasses and hats. I reach for my Eliade book hoard all the time, but own none of Doniger’s books. Maybe I’m waiting for a memoir. Maybe it's that her "Indians" are in Asia. She doesn’t know me and I’ve never spoken to her, but she was part of the beloved community surrounding Eliade. Sometimes he asked her to speak for him.

A beloved community is both a supporter and definer of one’s identity (“me-talk?”) and a challenge to it. One sometimes has to stand against it or other times take an outright loss of face or even income, but many times it is a shelter and a salvation. Learning how it all works is a key part of wisdom.
Posted by Mary Strachan Scriver at 12:26 PM