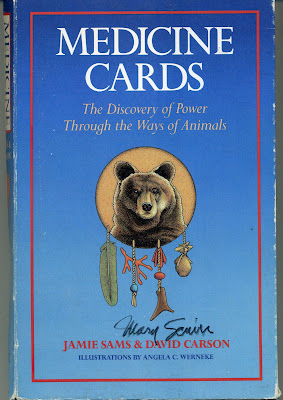 One day in Heart Butte Molly Bullshoe, the teacher of Blackfeet language and ways, had to be gone. The principal asked me to take her class, full of young boys who couldn’t keep their butts in their chairs or their mouths and hands to themselves. Worse, I’m only a wannabe Blackfeet. So what would I do? Then I remembered my pack of “Medicine Cards.”

As you can see from the package above, this is a deck of cards sort of based on Tarot -- one card for each animal and then a book that tells you what the card is supposed to mean. It’s a bit hokey and certainly not Blackfeet! No old-time Blackfeet ever had a dolphin for a totem guide animal! Nevertheless, the cards are beautiful and it was worth a try. 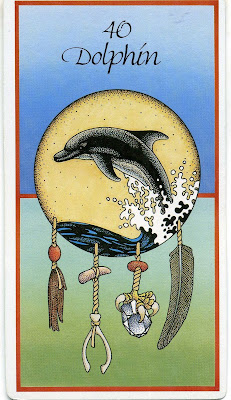 We sat on the floor in a circle. Everyone drew an unseen card at random. THAT was to be their totem animal for the period. I read from the book about what the animal meant and then we tried to figure out whether it really was the right animal for that kid and what that animal might say to him if it showed up in the room right then. It was dynamite! We had a great time.

I think there were several reasons these cards worked. They were something to focus on that was about each of us (a topic of primary concern at their age!) and yet was non-threatening. There was no pass/fail/you’re-a-dummy dimension. There was the “magic” side of it, which is always there no matter how one tries to be simply objective, but also stronger when art validates it. It was new, something they had never seen before, and yet it echoed something familiar: the visionquest system of the Old Blackfeet when males their age fasted in the mountains to acquire an animal connection with the world. They really WERE Blackfeet and felt some level of entitlement. And they knew playing cards.

They did NOT know Tarot, though the postmaster told me she had enjoyed telling fortunes with Tarot cards and thought they were a good way to manipulate people until someone accused her of using pagan devil magic. After the success of Medicine Cards I had made a pack of cards about the Greek gods and for a while I “told fortunes” with them. A student chose a card, I looked to see what it was and then asked questions more than told answers. “Aha! This is Venus! Something is happening in your love life?” Or the Jupiter card would come upside down. “Gee, looks like something is going on with your father that’s contrary. Are you arguing about something?” The postmaster declared this no different than Tarot.

Another commercially sold system has been created using runes: the player reaches into a bag for a chip with a mark on it, then looks up the meaning in a book. The one I know best was written by a man who said he was careful to make sure the meanings were positive, constructive, and never damning. Runes are as old as tarot, another Old World system. A more technie gimmick is a “black ball” that has a window where answers to questions float up out of the dark. When I was a child, it fascinated me. Great for parties!

These games play off two human universals: wanting to understand what’s going on and finding symbolic meanings in small signs, even the entrails of a chicken or a few words from a prophet. Some people close their eyes, open their Bible and stab at random with their finger to see what they touch. I check my horoscope every day and once in a while it has a run of seemingly accurate predictions like, “you’re about to be surprised.” (Actually I’m surprised quite a lot of the time -- it’s a safe prediction!) In a very difficult and confused time I had an I Ching program in my computer that not only threw down the three pennies for me (the meaning is in the heads/tails ratio) but gave me the ancient Chinese “meaning,” which was always cryptic but often focused attention on something in a helpful way.

Just now I looked on Google for something I remember: an idea “slap pack” of cards intended to help people who had gotten stuck in some kind of invention or planning, like a card that said: “What if you turned it upside down?” or “Does this remind you of something in your childhood?” or “What would your uncle say about this?” Sometimes the question made you think of a new answer and you slapped your forehead, crying out, “Of course!” The trouble with a lot of politics is that the interests of the status quo prevents the use of “slap pack” questions that would open up new ways of understanding. Good counselors know a lot of "slap pack" questions.

If one has feelings about the meaning of animal species, maybe because of knowing them well in daily life, as the Native American people did, then the appearance of an animal might seem like a sign. In “Bronze Inside and Out” I included a moment when Bob and I were far to the north to go moose hunting. One sign was not a moose, but the absence of moose. Then two animals appeared on the highway in front of us, so engrossed in their interaction that they hardly paid attention to our oncoming pickup: a raven and a coyote. The raven was diving at the coyote, which leapt up to try to grab it. These two creatures are known as resourceful, playful, and very often the embodiment of tricksters. Being fooled, faked-out, especially on the northern plains where missing a small sign can mean big trouble, is a major issue in life. (It is at the heart of “bone game” or “stick game.”) We knew at once that we were seeing two splendid creatures, but also being given a message about us and our relationship. Only time unraveled that meaning.

If I run across one of the boys who were in that class almost twenty years ago, I’ll ask them if they remember what animal card they drew, what we thought it meant and how it played out in their life.

I've used the Medicine Cards for decades. I find them to dead accurate. But I don't "read" them for other people. I do the Jungian thing about checking out my own internal weather. I find the Cards to be absolutely helpful to my life, and have been for a long time. I'm on my second copy of the deck, having retired the first from wear.

These are cards that were designed to be used when in a moment creative indecision or block. They encourage the mind to come at the problem from a new direction, and I've found them to be infinitely useful in my creative life. This online website version also has an interactive card generator, so you can draw a card online.

Thanks, Art! I think "Oblique Strategies" was exactly the slap pack I was thinking of.

When Googling, I also discovered that to "slap pack" means to pack without a suitcase, just tossing everything into the trunk!

anyway to get electronic copy of the book for my lookbook?(like a kindle