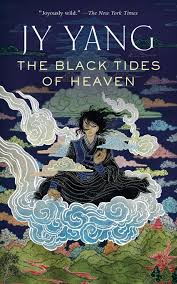 I had not thought about the "Orientalism" of sci-fi/fantasy until I read "The Black Tides of Heaven" just now.  It's an easy conclusion since the author's name and the constructed world both sound Chinese.  "Orientalism" is a particular style that creates a world that is a derivation from a real world, so it is clearly fantasy but constantly sticks to the familiar enough for the reader to know what's happening.  It is also highly ornamented with poetic sensory detail and usually focused on love and war. The restriction to what is basically a stereotype can be political.

from Wiki:  "Orientalism is a term used by art historians and literary and cultural studies scholars for the imitation or depiction of aspects in Middle Eastern, South Asian, and East Asian cultures. These depictions are usually done by writers, designers, and artists from the West."

You can easily check out what I say here by taking advantage of a publisher's offer, just as I did, as follows, from Tor.com, publishers of sci-fi fantasy:  "Each month, the Tor.com eBook Club gives away a free sci-fi/fantasy ebook to club subscribers.  We’re excited to announce that the pick for November 2018 is the Hugo- and Nebula-nominated novella THE BLACK TIDES OF HEAVEN by JY Yang, one of a pair of unique, standalone introductions to Yang’s Tensorate Series, which Kate Elliott calls “effortlessly fascinating."

The spine of the story is a feudal world into which are born identical twins.  The ruler is a woman and is their mother.  In this place one chooses one's gender at age six -- one twin becomes male and the other becomes female.  The story then separates as the two fates are followed through various situations, in which warring factions use their skills, including the ultimate: nuclear weapons as grenades rather than bombs.

The plot could easily be translated into the world of the American West or the lawless megacity ghetto, both of which are fun to convert into the particulars of an accepted genre based on time and place.  The "Orientalism" of this story makes it echo an Ursula LeGuin world in some ways, except there are no islands and the gentler anthropological ideas are made more high-tech.  It also has a strong feel of romanticized American indigenous people -- "cowboys and Indians" or trappers.  I don't have enough familiarity with Chinese stories to show how this tale is pulled out of the authentic national tales.  Knowing Chinese stories is not necessary and may be a hindrance if one keeps asking whether something is romanticized or real.

It's proposed that "novels" as a genre are ways of emphasizing particular strategies in life.  The beliefs of the people in this story emphasize family relationship as something special, love as just as special and possibly introducing contradiction between two allegiances, and the inevitability of enemies -- possibly coming out of one's own family.  Gender is seen as a choice.  Danger is real but can be defeated.  Nature is full of known controlled trees and unknown uncontrollable animals.  Animals can be tamed with kindness.  We can save each other with our bodies: transfusions, transplants, medicines.  This is often associated with love.

In this story the charisma of red ("Hang High the Red Lanterns" (a movie), red as Communism) is displaced by saturation with yellow.  All fabrics seem to be silk, rather than wool or cotton. Silk remains luxury.

If you want to "go deep", go here:  https://asianimperialisms.com/about-the-author/

Quoting Jim Polachek, another author:  "My focus or rather path of over-extension started with Chen Kaige’s Yellow Earth (1984) – a kind of Frontier Country version of Madame Bovary: manipulated feminine fantasy at the hand of a narcissist ideologue, true believer.

"So we have a kind of gestalt: a still trendy anthropological aesthetic attaching higher spiritual status to sound and gesture gleaned from wholly isolated and illiterate hill peoples than to crafted performance of any variety. Old hat for the Soviets and even for Japan, but breathtakingly nouveau for China."  And not that usual for America.

In another essay "Music in Red Sorghum: The Musical Representation of Magical Realism and Dionysian Carnival" includes a clip from "Red Sorghum," the film.  The point is made vividly: that the impulses of the naive people of the land reaching for a religious source that will give them power, confuse transcendence with sex -- related to some of our current movements

In America this realm of thinking and action has attracted people in the search for alternatives to rational "Enlightenment" which -- in a corrupted state -- has dominated our government and business to the point of self-destruction.  Young men now spared war-based draft and boot camp are running in the streets when they aren't conked out in their mom's basement.  But women are also in search of a new way.  Gender roles are all in question.

("Thoughts on Chen Kaige’s Film “Yellow Earth”" is a companion few paragraphs that suggests the consideration of art and primitivism as a principle.)

In their impatience with the current givens of the way things are, young people's authority has moved from the parents to sibs and friends, though the gender divide has faintly remained mostly in terms of romantic love both het and same sex.  There is loss of expertise, but a more unfiltered access to what happens: bonding, fusion.

My guess is that this story was written by a woman, but I don't even know for sure that this person named is real or whether they are Chinese.  Magic realism like this is a classic strategy for political objections to domination, but there is no real political message defined except palace versus temple.  The oppression seems to be Freudian -- mother as all-powerful, all-knowing dictator.  (Maybe a foster mother, though that's not explicit.  No father is identified -- in fact, males in general are mostly missing.)

So maybe it's just a great yarn, a people's romance for the enjoyment of the familiar mixing with the surprising.  I never did figure out the title in terms of the story: "The Black Tides of Heaven."  Is it about an eclipse. like the vid clip from "Red Sorghum" ?   Could be.
Posted by Mary Strachan Scriver at 4:08 AM