Joe Brosio, painter, evidently shocked Google so much that they took him off their search engine.  Yet he's part of a long-standing and respected category we call surrealism.  Since he was a kid he'd been influenced by Hollywood's love of sci-fi and fantasy, which often feature entirely realistic beings -- like spiders or snakes -- put into situations where they are a threat to "normal" people, usually represented by men in suits.
https://surrealismtoday.com/john-brosio/
https://johnbrosio.com/paintings/

Brosio is intrigued by weather events that we see in the news all the time, like tornadoes and tsunamis, or in other natural events like a washed-up dead shark.  He juxtaposes giant chickens or crows with absolutely normal little houses and businesses, the way that Edward Hopper uses those settings to illustrate loneliness and alienation, more subtle but just as destructive.

But the painting that jolted me and a lot of others was the one below that showed up on Twitter, only to be "disappeared" quickly.  In this painting, the characters from "Jurassic Park", namely the dinosaurs, finally get their prey, a "suit."  Realistically, his guts are strewn for their meal.  Symbolically, you can assume it means politics.  It's the political climate that doesn't want you to see the image.  If I put it on here, it might get my blog post suppressed.  I'll try it anyway.  If the painting illustrated a sci-fi story, it would be understood for what it is. 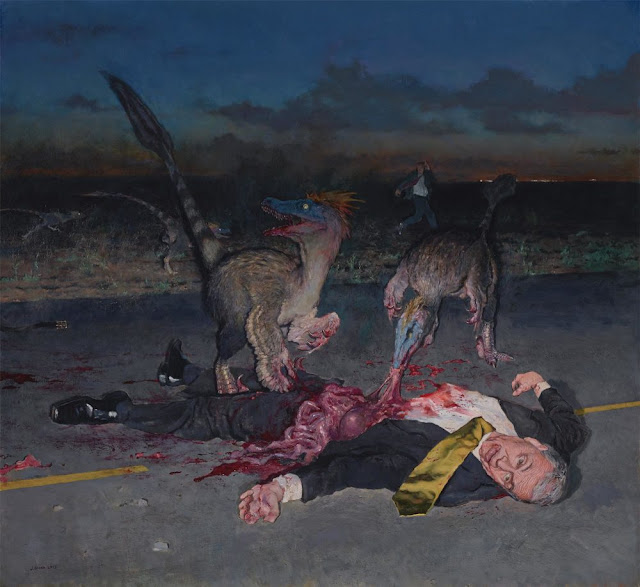 My thinking about Brosio's work was still floating around in my head when I read today's New York Times Magazine article about why white supremacy outlaw violence seems to be invisible and un-countered in this country.  We expect the "bad guys" to be as identifiable as dinosaurs, but to us white guys with short haircuts, maybe wearing suits, are US -- not just USA, but ourselves.  They are the people living in those little houses and running those little businesses.  But in truth the people who are dinosaurs, left over from past years, are both the suits of international corporations and the suits of our government.

The rioters are clean-cut white guys in the casual dress of the suburbs, meaning that they are likely to be jobless and living in the basement of their parents, full of rage that no one will fuck them.  The guy who lies gutted on the pavement is what those in power fear will happen to them if people of color from other countries ever get to them.  In truth, it is time that will kill them and it's not far off.  They are old.  If you take this point of view, this picture will please you.  Put it on the wall, pretend you're a dinosaur.  Forget that it was the little mammals who won in the end.  Not that they didn't throw it all away when they put on suits.

The problem now for law enforcement is that they didn't realize that they were a product of hegemony, that it was the good old white boys who organized and hired them, and therefore law enforcement can't see white guys who behave badly, VERY badly, like terrorists.  They feel like the cops' bros.
https://www.nytimes.com/2018/11/03/magazine/FBI-charlottesville-white-nationalism-far-right.html

"In at least one instance, the police have in fact coordinated with far-right groups. In 2017, a law-enforcement official stationed at a rally in downtown Portland, Ore., turned to a member of a far-right militia group and asked for his assistance in cuffing a left-wing counterprotester, who had been tackled by a Proud Boy."

. . ."White supremacists and other far-right extremists have killed far more people since Sept. 11, 2001, than any other category of domestic extremist. The Anti-Defamation League’s Center on Extremism has reported that 71 percent of the extremist-related fatalities in the United States between 2008 and 2017 were committed by members of the far right or white-supremacist movements. Islamic extremists were responsible for just 26 percent. Data compiled by the University of Maryland’s Global Terrorism Database shows that the number of terror-related incidents has more than tripled in the United States since 2013, and the number of those killed has quadrupled. In 2017, there were 65 incidents totaling 95 deaths. In a recent analysis of the data by the news site Quartz, roughly 60 percent of those incidents were driven by racist, anti-Muslim, anti-Semitic, antigovernment or other right-wing ideologies. Left-wing ideologies, like radical environmentalism, were responsible for 11 attacks. Muslim extremists committed just seven attacks."

It wasn't always like this.  When I worked for the Multnomah County sheriff in the Seventies, women and blacks and Asians occupied the highest ranks of the policing agencies.  Maybe it was the constant series of wars to protect oil that corrupted them.

"Military veterans, including those returning after multiple tours in Iraq and Afghanistan, might be particularly susceptible candidates, they noted, a prediction based on a 2008 F.B.I. assessment that found 203 individuals with military experience who had joined white-supremacist groups since Sept. 11, 2001. It was a tiny number given the overall United States veteran population, which at the time was close to 24 million. It was also a small percentage of the thousands of white supremacists the F.B.I. estimated were active. But the “prestige” that those with military or tactical skills held within white-supremacist groups made their influence much greater, the F.B.I. argued."

Here in this village we've seen it.  A recent veteran tried to find a "power point" to occupy.  He told me he was going to organize women to be armed and teach them to shoot.  When I pointed out that in the Sixties I shot a gopher every morning to feed the pet eagle and that I'd had to qualify on the sheriff's rifle range in Portland, he carefully avoided me.  In the end his "thing" turned out to be drugs with many suspicions of skullduggery, esp. on the rez.  (Our present sheriff is Blackfeet.)

One of the local women, who sees the world clearly except for considering most men to be dinosaurs (more Diplodocus than Tyrannosaurus Rex) calls them the Good Ol' Boys who run the town and county.  You're supposed to go to college to be a suit but they only need jeans most of the time.  When they are racist and destructive, they are classified as felons, druggies, murderers, nutcases.  But that's what many white supremacists ARE.  The cops need to get organized, filed, networked, the way they are for people of color or immigrants.  They're wiping their eyes and waking up.
Posted by Mary Strachan Scriver at 12:14 PM