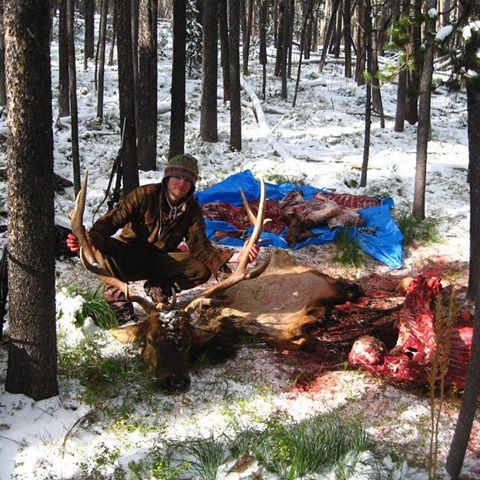 The Wednesday August 23 Open House in Valier to welcome Wesley Sarmento, the new grizzly management specialist for the area, was under-attended, probably due to harvest, heat, and the school year beginning.  But a half-dozen Montana Fish, Wildlife and Parks wardens turned out in support, all of them handsome young men, well-educated and full of energy.  This must be the third or even fourth generation of wardens over the last fifty years I’ve been bear-aware.

Wesley Sarmento turns out to have family ties to the Blackfeet Reservation through the Pepions and Kukas.  The low attendance of the general public turned out to be an opportunity to reflect together, especially since one of the attendees was Butch Gillespie.  He and his wife are dedicated to issues that affect livestock.  They raise cattle on the Kevin Rims, special “blends” suited to being raised for 4-H competition among kids.  The loss of one of these animals is not just about money — it’s about love and care.  Butch is a reasonable and patient man.

In the end, my own idea was that there’s been enough haranguing and taking sides, like every issue in our lives these days.  I asked myself how to evade some of the name-calling and blaming.  Therefore, I’m inspired to write a fictional story that sneaks in as much info as possible.  I’ve already begun it.  When it seems complete, I'll post it again.  Expect a lag of weeks because I want to do some research and let the idea develop.

This is the setup:

The bellowing of the cow and screaming of her son turned her blood to ice, even as she ran through the house to get outdoors where she could tell what was happening.  Her son was coming towards her and the bloody remains of an animal lay over his cradling arms, four legs, a tail and and a little white faced head were dripping blood as he came.  It didn’t seem as though any of it were her son’s blood.

She was relieved that it was only his calf, and then she was indignant with herself when she saw that it was a world of torn significance to her son.  It was the animal he was planning to raise for the county fair, a heifer with good blood lines and every sort of promise.

The boy carefully laid the little carcass, emptied of life as a discarded garment, no bigger than a man’s jacket.  “The fucking bear ATE part of my calf, Mom!”  This kid had never used that forbidden word before.  It measured his outrage.  “How could it eat my calf?”

“I’m gonna kill that bear.  I know which one it is because it had cow tags on its ears, one green and one yellow.  I’m gonna kill it.”

By this time, a mile away, the bear was hardly even walking fast.  She slung her big head from side to side, frustrated at not being able to drag that calf off with her.  She’d had it almost over the corral fence when the boy came screaming, and she was startled enough to drop her kill.  Usually there was no one around this early.

But — she’d already been able to eat almost a whole bag of dog kibble a few miles away.  It was in a shed and she’d found kibble there before.  This time it was up on a rack, but that was hardly a problem.  When she reared up, a corner of the package was close enough to bite and yank.  It didn’t even break open when it hit the floor, but . . . what are claws for?  The dogs smelled her, barked, came to see and backed off.

So she wasn’t hungry enough to try to fight for the calf carcass.  Later in the summer she would be when the hyperphagia was upon her and she tried to cram the whole world into her mouth.

The boy’s mom called even though she didn’t know the new warden and didn’t know what response to expect.  He tried to reassure her and said he’d get out there in a matter of hours.  He could hear the emotion in her voice.

The mom can barely keep the kid from shooting the bear.  What would be the consequences if he succeeded?   So then she calls the warden and he sets the bear trap.  I need info about how you decide where to put it, the bait, etc.

The issue of compensation for killed animals needs to be explored a bit.   I think the mom needs two family members: a grandfather who thinks only in terms of money and a sister who is romantic to an unrealistic degree.

The mom and the warden talk over the kitchen table and they kinda get a vibe going.  Turns out she had to quit an Upland Game Bird Habitat Specialist job to come back to the ranch.  So then I’ll need to know what that’s all about.  In the end, we’ve got a family here — but what about the bear?  What about the bear trap and relocation?

Then there’s a scene where "the boy goes out walking along the alfalfa field where the windbreak hedge still stretched out over the swelling land."  Most people had taken out their windbreaks by now, but the boy’s dad had always defended them, said they held moisture if only because the snow piled up against them in winter.  He talked about the habitat it provided for the pheasants and grouse, and he and his son often took shotguns and the dog out to walk a few miles.  Now that it was pheasant season, the boy was not grieving so hard.  Besides, his mom had brought home a half-grown black dog with a dubious heritage.  It would be interesting to see what reflexes it had, whether it would flush and retrieve.

The boy flushes the bear from the windbreak where it had a day bed and he shoots at it with his shotgun which has no effect except that the dog takes off after the bear.  The bear doesn’t come back for a long time.  The warden helps the boy find his dog and bring it home, which creates a bit of trust between them.

The pay-off comes at Christmas, months later, and by this time, in clichéd but appealing fashion, the mom and the warden have married.  I’ll finish using two memories of my own:

The three of them stood in the big front window looking out at the mountains while the sun came up.  Suddenly there were small fountains of snow under the hedge and they laughed as they realized it was the grouse flock just waking up and kicking their way out of their snow burrows where they had slept warm.  “You know,” said Wes, “Once my uncle found a bear den up on Looking Glass Pass and we took snowmobiles up to see the place.  All there was to mark the spot was a little hole with steam coming out — bear breath.”

“I leaned over to smell that little wisp of steam.”

Posted by Mary Strachan Scriver at 5:07 AM