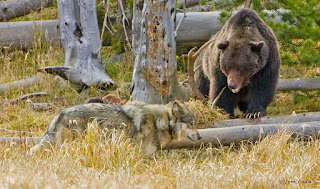 The new biology teacher was giving the local ranchers the heebie-jeebies because they saw him as one of those idealists who disrupt everything by arguing for the protection of predators.  When the boy’s mom came for a parent-teacher conference, Herb knew about the grizzly, the electric fence, the death of Abernathy.  The boy had used the material for all his essays since school started.  But he still hadn’t resolved his feelings about it all.

Settling into a classroom chair, the boy’s mom asked, “Would you explain trophic cascades and apex predators?  I’ve got a biological background but this sounds like new stuff and I did upland birds instead of what I think you mean by apex predators.”

“Sure.  I’ll quote: ‘Trophic cascades occur when predators in a food web suppress the abundance or alter the behavior of their prey, thereby releasing the next lower trophic level from predation (or herbivory if the intermediate trophic level is a herbivore.’”

She looked confused.  Too many syllables too fast.  Herb backtracked.  “Trophic just means where an animal species is on the food chain.  If there is a change in the top animal, the changes go domino-fashion all the way down.  So if wolves come in and drive out the coyotes, then whatever the coyotes were eating will do better and increase in numbers.”

“Until the wolves begin to eat what the coyotes used to eat!  They both eat sheep.”

“Well, yes.  And apex means top, so the apex predators are the top of the food chain.”

“Right.  Maybe you’ve been following the ecology research in Yellowstone where the wolves have been restored to keep the elk under control and the consequences have been dramatic.”

“So if I understand you properly, this talk about trophic and apex is part of the scientific shift from studying individual animals or species to an ecological focus where the whole web of life is seen as interrelated and crucial to maintain.  It’s biological globalization.”  She hadn’t realized she knew this, but she did do a lot of reading about current work.

“Well, that’s right.  You probably know how important native grasses are to upland birds.”  He was pretty quick to relate to people, this Herb!  Thought-ecology was one of his skills.

“And the apex of all apexes is human beings.”

“Right, but since you know about birds, keep in mind that human political pecking order has a lot to do with what happens to every living thing on this planet, even in the oceans and on the polar caps.  A lot of study of elephants and whales.”

“If you say ‘global warming,’ I’m going to scream.”  The arguments with her sister had worn her patience thin.  It wasn’t that she was denying the phenomenon, but that she didn’t see what she could do about it.  It just added to the load that was already heavy.

Herb quickly changed gears.  “Now about your son’s grades, he’s doing really well.  He’s motivated, he already knows a lot, and he’s quick to take in new information and reconcile it with real life.  Maybe he could use a little more support in terms of . . . well, mourning.”

“You mean Abernathy’s death?  We’re all grieving over that one.”

“Some are comforting themselves with anger.  It was a scary event.  They see a need for vengeance against bears and that worries Joey.”

“I see.  I’ll think about it.”  She stood and extended her hand.  He took it warmly.

When Joey’s mom got home that night and was in the kitchen chopping up veggies for salad (“What an herbivore I am!” she thought.), Joey came in from taking care of his new calf and settled at the eating island in a way she knew meant he wanted to talk.  Sometimes she waved him off, preferring a chance to think, but now Herb had put a bug in her ear.  “I talked to your biology teacher today.”

“He’s the best teacher I ever had, Mom.”

“We talked about trophic cascades and apex predators.”

“Right!  Those are key ideas, Mom!  And you know what?  It works for analyzing the whole school system!”

“You remember Bruno, that big kid who used to bully everyone?  He’s gone.  His folks moved away.  And guess who the new apex predator is?”

She was startled enough to nick her finger with the paring knife, not much, no need for a bandaid.  But she stuck it in her mouth to suck and then went to the sink for soap and water.

“It’s CLARA!  It’s a girl!  Like the herd cow, the old one who knows where water is and everything.  Clara is getting us organized!”  He went on, but she wasn’t really hearing him.  This boy was definitely growing up.  “Mom, mom?  This is important.  It even explains politics!”

She thought to herself, “as though anything could explain politics.”
Posted by Mary Strachan Scriver at 10:35 AM