BUYING EDUCATION -- I DON'T BUY IT 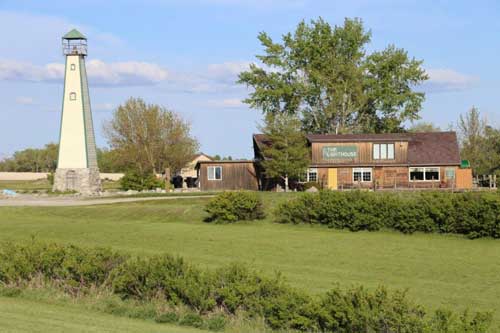 The actual "Lighthouse" was built during WWII as a beacon for pontoon airplanes
landing on Lake Francis.  None do that now.

A former student of mine from as long ago as the Sixties (?) and his wife are taking me out to dinner tonight at the Lighthouse, which is an excellent venue, as good as anything in Portland where my student lives.  You could buy it.  http://eastsloperealty.com/commercial_descriptions/lighthouse.html

This student is retired after decades of working with Native American education within the conventional framework of schools governed by states and counties, including the high school in Browning where we first met.  This does not mean he’s conventional.  He’s spent most of his life in Portland where they raised their son.  He led me astray once by clueing me in to Native American “bulletin boards,” online discussions on the Internet at a time when I could barely operate a computer.  It was one of the most valuable sources of knowledge I've had.

This added a layer to my understanding of Native Americans who taught me, whom I taught, whom I read about, who set coffee in front of me, whom I helped drag dead grizzly bears across the shop floor — okay, enough.  I never married a Native American and the closest Bob Scriver ever came to doing that was a French-Canadian.  My major contribution at the moment is helping Paul Seesequasis (a Willow Cree in Saskatoon where I walked off from the ministry in 1988) figure out where old photos were taken by Magee and McClintock.  They're for a book to be published this fall in Canada.

Oddly, I’ve developed opinions about professional Native American education specialists who are white.  Many of them strike me as charlatans, a few as nut-cases, and some as saints.  (Name three — this is an old test of generalizations)  Coburn, Ward, Jamruska.  At least one was evil: the one who found a passed-out old drunk in the grass and superglued his fingers together into fists, so that when he woke up — badly needing to piss — he would not be able to work his fly zipper and drench himself.  I know this because he described it with glee in a book he wrote about his experience.  (Bob used to say, "Indians think all white people are crazy and they're right.")

Over fifty years of experience, a lot of it apart from education or academia, I’ve come to the conclusion it’s time to throw out "formal" education as we know it.  In the first place too much of it is really missionizing.  In the second it is based on Prussian ideas about preparing soldiers for obedience unto death.  In the third place it doesn’t address citizenship in a world of many nations, nor technical skill at the needed level (not even for sex), nor the managing of one’s identity, nor justice, nor what to do when things grow abysmally and dangerously wrong.  As an operational manual for life, American education is crap.  (I hardly ever use that word but I never say shit, so it will have to serve.)

The problem at core, in some ways, is that we assume that people as they are born and grow up must be guided, urged, and graded.  The truth is -- and there is much scientific proof for this -- people even at the stage of gestation (pre-birth) are irrepressible learners.  To be alive is to learn.  Only drugs can stop it.  Even punishment teaches something.

My laundromat friend who is ninety still thinks teaching is a noble profession and should be respected.  He probably thinks the same about ministry, though we haven’t discussed it.  He asked me what I thought was the most valuable thing I’d done, what I was proudest of.  I said “writing.”  He didn’t know how to respond.  He reads quite a lot but not the kind of thing I write now — and in conventional ways, not on a “blog.”  I don’t think he’s read my published books:  “Bronze Inside and Out” or “Sweetgrass and Cottonwood Smoke.”

He is not educated to get a “big picture” of professions, the specialized roles for which one must buy extra years of training (grad school) in order to acquire vocabulary and concepts.  But he IS educated about citizenship because he was a military guard at the Nuremberg Trials.  What he knows first-hand is primary, basic and character-building.  None of it is less valuable because he and his wife run a laundromat.  He is a man of great honor and wisdom.  I love visiting about the news with him, though the news dismays him so.

The major things white people seem to have taught themselves is denial and avoidance, like the people downwind of Nazi crematoriums who ignored the smell of burning flesh.  To point out the Confederate flag with a skull in the middle that flies next door is to cause uproar.  Yet this village is obsessed with “lookin’ good” so people will move here.  Some of the most intelligent and progressive local people I know are defending Trump (STILL!) on grounds that he’s no worse than all the other politicians.  Levelling.

When I taught in the Sixties, my “English” textbook had a whole chapter on fallacies and propaganda.  Contemporary texts have no such thing.  High schools no longer provide civics classes.  Students at my seminary raised a ruckus about having to learn French (a foreign language is a traditional requirement for a liberal arts MA, from which the MDiv is derived) so the requirement was dropped. Regardless of what other strategies and values are taught in an institutional context, the overriding imperative is to avoid controversy because it will lose money, and the result is the LOWEST and most COMMON denominator.  One must often go outside academia to find what one needs to learn.  The saving graces are the used book industry and the internet, if you can name your question.

Mothers and aunties in both Heart Butte and Valier, which are linked at the heart by the Pondera Canal Company irrigation system derived from Swift Dam, tell their children — esp. the boys — get an education and get out of here.  Do not become trapped in this circumscribed place because the results will not be good.  It used be that the draft would at least let boys see the world.  Now it is the girls who can qualify to join, because they paid attention in class.  One doesn’t need bayonet drill now — one needs to know coding.

I’m hoping that we’re just at an awkward stage, somehow having gotten enough “Free School” challenge for Betsy DeVos to see the commercial possibilities, and having watched madrasa students rocking and memorizing the Koran in the way we barely remember our students memorizing Great White English-Speaking Men poetry and speeches.  There is so much and so various a body of things crucial to learn that no curriculum is adequate.

So it seems clear that the thing to do is self-teaching, sort of like cars that drive themselves, except freeform, meta-level use of the brain which is only the dashboard of the body, which must move to learn.  (Autodidacts have always been with us.)  The success in teaching Blackfeet language at Cuts Wood School is due to acting out the words — living the concepts.  We make fun of “monkey-see/monkey-do” because that’s only an evolutionary step.  But the teacher who does is effective.  The joke about “those who can, do; those who can’t, teach” is an ironic challenge.  Those who cannot do, cannot teach.  They’ve never been out of town.

Posted by Mary Strachan Scriver at 5:29 AM