A CHURCH IN OREGON CITY

The historic town of Oregon City is threatened by fire, including Atkinson Church.  This is what is at risk. 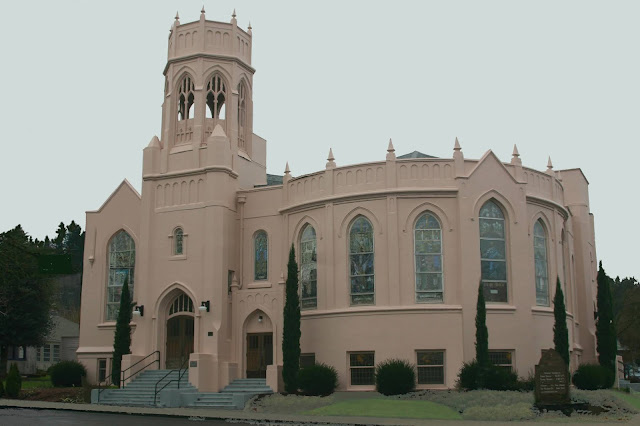 A few decades ago when I was living in Portland and doing pulpit supply while I worked for the City, I was asked to take a Sunday in Oregon City about the time of graduations in June.  This is a remarkable church, not always Unitarian and for a time with a double identity as it moved between being Congregational and being Unitarian. They are very conscious of the historic significance of the town.  So I decided to include the big anthems of allegiance:  “Land of the Empire Builders,”  “Roll On, Columbia, Roll On,” and “Oregon, My Oregon.”  It worked.  We roared out these songs and spontaneously sang in parts.

Most of the congregation was old then, so now they are probably dead of old age.  They were gentle believers in simple justice and the advice of Jesus.  One of their pastors had been black and another had been gay.  Now they are usually female.

Two-levels of the town exist, connected by a steep road from the river to the top of the bluff.  Along the waterfalls and rapids one part grew up around the factories powered by the water since early days.   As a child I went with my mother to buy yarn directly from clacking, claustrophobic industrial revolution machine floors that made mothers able to knit the sweaters one needs in Oregon weather. Up on the bluff is where the UU church, McLaughlin house, and other historic buildings are restored and maintained.

My father was a wool-buyer in an early career and later worked with Future Farmers of America, developing competitions for prizes which he tried out on us.  Do you know how to tell which sheep have the finest wool just by looking at them from the road?  The ones bred to have long-fiber soft wool are kept in fields and spread out.  The other ones are bred to stay together in herds, so they can be managed by dogs and shepherds.  They make shorter, coarser fiber.  I am still sharply aware of these things as part of this place.

Fire is threatening Oregon City.  I don’t know whether on top of the bluff or down along the falls.  The fine historic houses could burn but there is another crop that will never burn:  eels!  This link shows them being pulled out of the falls by people who have eaten them as long as there were people in the Willamette Valley.  Fires come and go but eels stay.
https://www.youtube.com/watch?v=Sc8VGyY5Hf4  The history here includes both sheep and eels, recent whites and ancient peoples.

This is the history of the building.  I add it to provide an example of how institutions are always in "process," moving from one thought system to another, but always vulnerable to the larger national trends. http://uucwf.org/history   Note these years from the list.

1918:  “Spanish influenza epidemic forces a ban on all public meetings in Oregon City, including church services. After the Armistice ends World War I in Europe, church members take turns ringing the Oregon City church bells despite the ban. The ban was lifted November 16.” 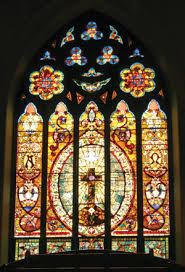 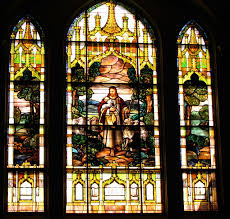 Feb. 15, 1925
Installation of the memorial stained glass windows, designed and installed by the Povey Brothers Glass Co., is completed and dedicated. Total cost of the completed new building is $75,782 – more than double the original estimate.

1955
Reverend Bachelder participates in the formation of the National Association of Congregational Christian Churches. Since the Oregon City church is far away from the other 100 affiliated churches, the church begins to cooperate with the Unitarian Association in religious education and summer family conferences. Church membership is reported to reach 760.
December 1956
A large group of congregants leaves believing that Atkinson is too liberal.

1961
The Unitarian Universalist Association is formed and Atkinson Memorial Congregational Church votes to become a member of this association.  [The new denomination joined Universalists and Unitarians at the General Assembly in Portland that year.  This was transformative for the denomination.]

September 1975
Reverend Richard K. Bellingham, a Congregational minister, is called as settled minister of Atkinson.  [A gentle thoughtful man, his installation was the first formal UU event that I attended and my introduction to a powerful cadre of UU clergy.  Bellingham’s task was healing the congregation after a drop in attendance from the 600’s to the 200’s and the sudden death of Rev. Robert Bowman, the beloved previous minister.]

I occasionally attended Sunday services there and once was too early, so I also attended a Christian church across the way.  The pastor there used in his sermon an image from his youth in Texas when he and his dad went out on their ranch to feed the cattle.  The sky was full of stars that shone down the sky to the horizon and from that line the land was full of homestead lights just coming on.  He proposed this as a metaphor for “religion” taking the transcendent stars down to meet the immanent human lights.

Not far away from Oregon City was a new development, the beginning of a new economy that was neither sheep nor eels, a mini-Silicone Valley that had attracted California UU’s.  At first they were a fellowship but as they grew they began to think about church buildings and their eyes lit on Atkinson Memorial Church.  They had money and the church perpetually had leaks.  They joined the church in what looked to me like a takeover.  I only preached there once more and it was memorable.

A big overbearing man came to coffee, though disliking my sermon, standing practically on my toes, and spitting into my face his hatred and resentment of anyone — minister or not — who tried to tell him what to do.  I don’t remember what the subject was.  One element of UU’s is like that — Atheists and Anti-Authority asserting that computers are as good as humans, so invested in control that they enter the Dark Side.  I expect by now he’s moved on.  That was 25 years ago, about the time I began to drift away from the role of congregational ministry.

The point in this long tale is that in the face of despair and sorrow at the loss of human buildings and communities, we must remember that no institution, church or home or the people who inhabit them is ever “safe” or “permanent”.  But through fire and flood, through remembrance and love, the lamps of the homes will be lit again under the light of the stars. Sheep will graze the burned-over land and eels will climb the rocky falls, even if the church with its splendid Povey windows burns to the ground.
Posted by Mary Strachan Scriver at 4:22 AM