THE UNIVERSE IN A BUBBLE

Rethinking the kind of meaning that dominates religion on the Western side of Eurasia, particularly in urban places, means realizing the most basic assumptions of oneself and one’s setting, and asking how to change it — what would the new meaning be?

The earliest and most terrifying change has been brought to us by advances in science in much the same way that Copernicus was pushed to see that this planet is not the center of the solar system.  The “big three” contexts (Judaism, Christianity, Muslim) are all centered on humans.  Even their god is humanoid.  Their wars are about who is entitled to be called “human” and who is superior version.

Cutting edge science tells us that we are not the goal but merely a by-product like every other form of existence.  Even “life” itself is not clearly defined and separated, but a phenomenon of molecules interacting, atomic elements creating complexification.

We had not even managed to make the planet Earth the center of meaning.  No sooner did we see the photos of the planet, so blue and small floating in the velvet dark, that we began to think of going to other planets.  One UU minister had a huge mural of the galaxy Andromeda put across the back wall of the sanctuary.

If we are to be brave enough to leave the idea that humans are the central meaning of existence, particularly the kind of human that we happen to be, then we need symbols.  We’re told by people like D.W. Winnicott that a growing child needs a symbol of the mothering and safety he/she has known.  Then venturing out across big public spaces is an adventure because of a teddy bear or blankie going along.  Christians take a cross with them, make a sign of the cross for protection. 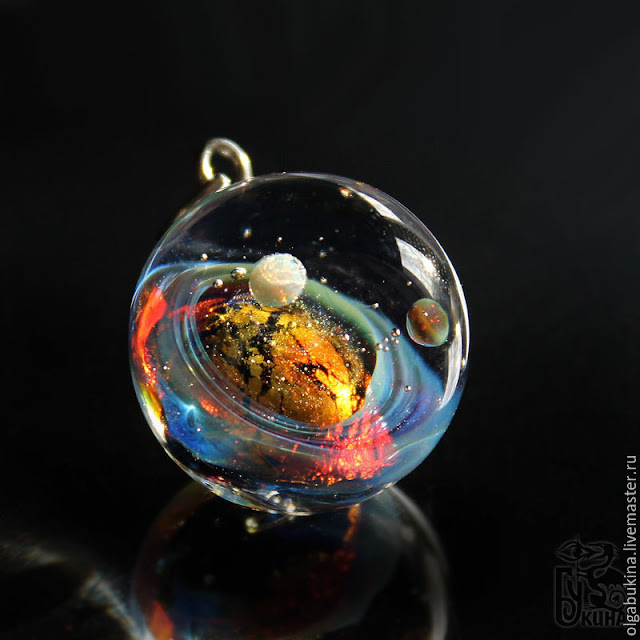 Just now we have found something like that for our new and literally awful understanding of meaning:  spheres small enough for a necklace that nevertheless contain the universe.  The first one I saw — via the internet, of course — appeared only weeks ago.  It was Bulgarian, crystal, etched somehow inside with lasers.

Since then I find these orbs in many common sources, many sizes, many colored, many prices, as often high-grade plastic as glass, with little loops for threading a slender chain.  Some inclusions leave the solar system and galaxies by capturing bits of the sea or other nature.  Some are big enough to put on a stand for a tabletop.  Others are tiny enough to pocket or hold in a closed hand.  They aren’t cuddly, but they can be held close. 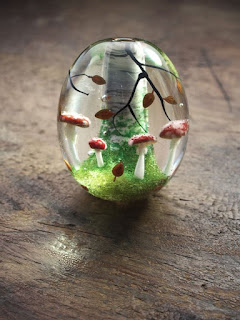 We so need something to hold onto, but can a bubble — even one so exquisite and durable — replace a cross that can be made with two fingers or a couple of twigs?  If a cosmic sphere must be made with skill and special materials, thus becoming costly, can it become popular and carried everywhere?  Can it “catch on” like Pokemon?

The problem is rather like the puzzle of congregations during a pandemic that forbids us standing together, singing.  But a shared gathering that is the heart and symbol of religious institutions can be re-composed as an internet event if you have a computer and connection.  It will be different but still functional because the eye and ear can grasp it, just as the hand can grasp a glass sphere, cool until it is warmed by body heat.

A congregation that is “virtual”, individuals joined across space and time, is so new that we’re clumsy at it, but it includes people we might not even know are there.  We won’t be able to judge them by their appearance or their ethnic origin or their class if they don’t want to be seen.  This is both good and bad — morality is eased away from the superficial, but human attachment is very persistent, and it is at the heart of gathering, which is also cold until warmed by body heat.

Some thinkers sort out theologies according to the way they deal with death, the fact that every living thing will eventually stop and disappear.  The Christian says we will live on in Heaven or Hell; the Hindu says we will come back according to what we deserve, and the Blackfeet say they will go to the Sand Hills, an actual place.  To confront the immortality suggested by today’s science is to admit that every individual is a temporary gatherings of what is continuous and forever — the universe, the cosmos.  We are a trajectory from birth to death, in relationship to everything else.

If the center of our thought cosmos is “Everything” this aligns with the people who say that their idea of God is that which includes all things, including ourselves.  We exist in God and cannot leave even when we are wicked and disobedient because so is God.  They have convincing proof.  Maybe Jesus means that even God can be broken, splayed and displayed along public roadways.  Now that we know that many people were crucified by the Romans, it is even more obvious that the metaphor of human for God means suffering.

I don’t know how significant it is that the crucifix symbol in some countries — particularly the Spanish ones that were so influenced by Goths and Moors — cherish depictions of Jesus that are bloody, wounded and dying.  The impoverished places seem to emphasize — empathically — with the suffering and their compassion for the corpus on the cross.  This not available in other symbols, like prayer flags or rosaries — or glass spheres containing the galaxies.

But in our times, with our science, we are not facing destruction by the Roman Empire (at least not until lately) but rather the enormous indifference of grinding, pulsing lightshows in endless space.  If we are just little puckers in the continuous weaving of particles, then it is a great comfort to hold a sphere, a bubble, in one’s hand — a reversal that makes existence something we can love and participate in. 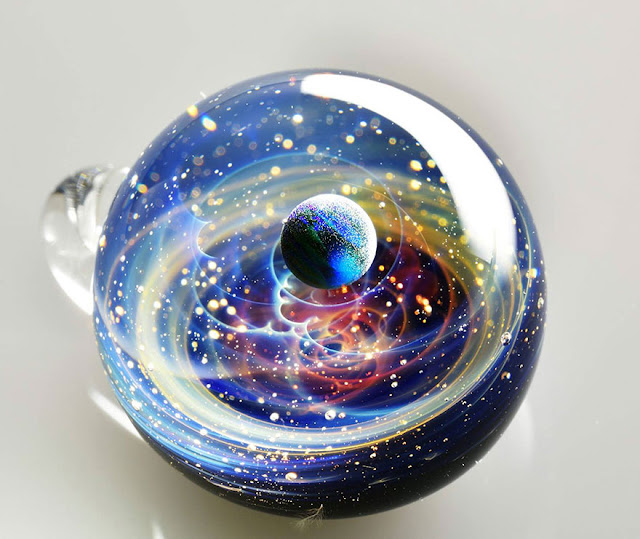 Posted by Mary Strachan Scriver at 4:25 AM