MY CAT COLONY IS WATCHING THIS 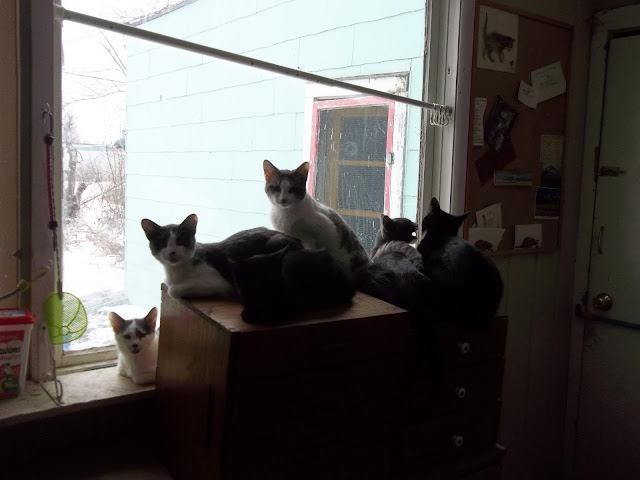 Twenty years ago when I moved in, I did cats the respectable way.  I was hired to teach, so I acquired two kittens, got their shots and spayed them, and spent an hour sawing a cat flap in the security-solid kitchen door.  But I quit the teaching job in a couple of months, scandalized by what it had become, and took a series of little jobs until I qualified for Social Security.  In the next ten years I wrote my bio of Bob Scriver, "Bronze Inside and Out."

These first two cats had an aged mother and were probably fed too well.  They became arthritic and incontinent younger than they should have.  I asked the vet to put them to sleep, which I could afford then.  For a week or so, there were no cats and I wept buckets.  The vet made it clear he did not like killing cats.  He’s invested in the “fur baby” metaphor.

Then Patches, the neighborhood feral cat, had her kittens in the garage.  She was truly wild — I never touched her.  I fed them.  The neighbor’s dog killed one.  Then she died, but her kittens were no longer feral.

The neighbors bought an old pickup and towed it home.  Three kittens were hiding in it.  One died, they kept one and the third one moved into my house.  He became a big dominant striped and dotted tomcat I called Finnegan.  The little female I called the Blue Bunny (the name of an ice cream brand) because she WAS blue, fell madly in love with him.  She sat next to him, leaning against him, gazing up at his face and purring.  After he got her pregnant, he left.  I wasn’t sorry.  He had peed in the potted plants, picked fights, and generally tore things up.

Blue Bunny, by now the Mamacat, had four kittens, which is standard.  I was drowning them as newborns while she was outside, but when she came in and saw what I was up to, she moved the last two down the trapdoor under the house, grabbing one by the back leg instead of properly by the neck.  It screamed.  I didn’t see them again, couldn’t get into the shallow space under the geranium bump-out window where they were in the farthest corner, until one day I heard mewing and here came the black and white kitten I called Tuxie.  (Tuxedo.)

Half a day later she was followed by the gentle little gray kitten that eventually had its face torn off by something unknown.  I drove it -- stoic and immovable -- to the vet to kill the mite, because I can't bear to kill them once their eyes are open. That vet does not like me.  He thought that as soon as I saw what had happened, I should have driven thirty miles in the dark to pay him to fix it.  If it were possible.  He would have done his best.

By now, sets of kittens later — mercilessly edited by me —there is the S-series: Splotch, Streak, Spots, and Stripes.  Then the Buttons, who became Zippers, all but Fuzzy who should have been named Tufty.  It was badly developed and died for no particular reason.  All the kittens struggle with sealed eyes and gloppy noses but then recover except for a few.  By now there are only two Zippers: Inky who is not well and Pinto.  (There were already three Spotties.)

As things stand, there are maybe ten cats, including Salt and Pepper, two tomcats grown huge who are litter mates Caruso walks through the house at night singing.  We never see him in the daytime.  I feed a couple of cans twice a day to see who’s still here.  Seven are sleeping with me by morning.

Tuxie and Blue Bunny have caught onto me and don’t seem to have kittens anymore.  They may be having them somewhere outdoors where they don’t survive.  Tuxie has become a Trannie, acting like a tomcat and relentlessly pursuing the much bigger toms.  They run when they see her and shriek when she smacks them.  She is devoted to the Blue Bunny and the two of them travel together, but during the morning nap shift, it is Tuxie who settles down with the Zippers and cleans their ears, etc.

One S-series kitten, Streak, has hit her head. (My fault — I pushed her away too hard and her head hit a bureau of drawers.)  Sometimes the pupils of her eyes are different sizes and she’s very clingy.

The closest “humane society” is thirty miles away. There was one closer but the woman who ran it left for a better job.  My income is a barely adequate:  SSI and a small pension. My ancient pickup is not roadworthy.

Of course I googled.  Below is an unattributed google.

“A cat colony consists of a group of usually related female cats and their offspring. The size of the cat colonies depend upon the availability of food and other resources. Adult male cats do not live in cat colonies, but friendly behavior between females and males can occur, especially when familiarity exists.Mar 6, 2019”

This household best fits the idea of a cat colony.  There was a feral one up the street that was mostly ginger cats and lived in a old church building, but some one removed them, probably with poison.  Once I saw them crossing the street to the house of a woman who fed them.  There may have been twelve, all strung out in a line.

The description above doesn’t refer to “owned” cats but to the semi-fantasy of “feral” cats.  There is not enough description of the various ways cats organize themselves.  For instance, no one speaks of “satellite cats” that keep a human household or a feral colony as a reference point, coming and going according to need and inclination.

Studies where cats are equipped with tiny cameras so they can be traced and maps of their routines can be studied, revealed that they don’t normally trespass on each other, but that there are “two-fer” cats who belong to more than one household, visiting daily for food at both of them, each believing the cat is theirs.

The Cut Bank animal control officer is as realistic as I am. When he catches a skunk for someone, he releases it in a better place for skunks.  He says that the way to eliminate feral cats (and some pet cats) is to suspend the leash law, but in livestock country no one will ignore the leash law except someone’s college kid coming for the holidays and bringing his or her big dogs along.  No one brings their cats to visit.

Posted by Mary Strachan Scriver at 11:29 AM