The childhood books of both my parents were still around in my own childhood and I was gifted with those stories about girls who are so plucky that they cheerfully overcome every hardship which have become vid series on Netflix about Nancy Drew types with four-inch heels.  Alongside them I read stories for boys because I had no problem identifying with the “other”, even animals.  Among the key authors who have influenced me ever since were Ernest Thompson Seton and his daughter, Anya Seton, though they were totally different.  Anya wrote historical novels, quite sexy for the times.  Seton Pere loved Indians and wild animals.

Somehow Tom Sawyer and Huck Finn were okay, but the book I preferred was ETS’s “Two Little Savages.”  I still have it.  “This work has been selected by scholars as being culturally important, and is part of the knowledge base of civilization as we know it.”  Booth Tarkington’s “Penrod and Sam” never reached this level, but it tried.

Grown men pairs have always been staples of adventure.

Today I have four first editions of books by Seton and tomorrow I will have only two, because I’m sending two of them to my niece who has two sons, 8 and 11.  The books I’m wrapping this morning are “Wild Animals I Have Known” and “The Lives of the Hunted.”  They’re very good for reading out loud, but I’m not sending “Two Little Savages.”  I’m not nearly finished with it. 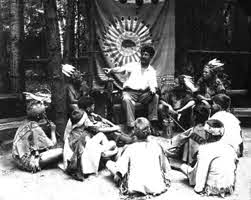 It’s no secret that I’ve written with and about Tim Barrus in this blog.  Never in the past did I think of comparing him to Ernest Thompson Seton in spite of him having far more similarities with Seton than with me.  (I’m a straight, once-married, once-clergy, over-educated old woman.  He’s none of those things.)  Both Barrus and Seton had abusive fathers, both of them claimed a demographic of people regarded with fear and hatred mixed with an almost mystical belief in their exceptionalism (Indians and Gays), and both suffered through accusations of being untrue writers.

Barrus was said to be pretending to be a Navajo and Seton was assailed for anthropomorphizing animals.  Both were seen as people deliberately deceiving their readers and leaving out rational science for the sake of sales.  But there were other issues, hidden.

Baden-Powell, a founder of the Boy Scouts, accepted Seton as a co-founder and used many of his ideas about Indians and “woodcraft.”  Today the Boy Scouts — the Boy Squats, as I derisively call them — are discredited because of the many cases of the leaders taking sexual advantage of the boys, esp. the “cubs.”  My brothers were both cub scouts and I got dragged along to many Weeblos ceremonies.  Then they suddenly lost interest and never became Boy Scouts.  Now I wonder why.

Baden-Powell comes out of the elitist system of boy boarding schools in Britain.  This pattern of removing boys from families and housing them where they slept in dormitories was a seed-bed for the pattern of sexuality-as-control made real when older boys dominated younger or weaker boys.  The fact that it was a shared secret has come out in many books.  The pattern recurs in many mono-sex settings with rigid hierarchies, permission for the top to exploit the bottom: military, athletics, politics, convents.

In Gay parlance this style of sexuality is called SM  Sadistic/Masochistic — couples where one is powerful and the other accepts it.  It has been enforced in the broader heterosexual world through the social paradigm of economics of marriage: one party legally entitled to use money to dominate the other who is obliged to accept it for the sake of the children.  The rest of the pattern is realizing that women learned many ways to undermine and control men and that same sex relationships can also be that way.

I suspect that both Seton and Barrus broke free from this pattern and attacks on them were partly meant to bring them into line (bondage) with everyone else.  Their defiance invited the accusations of would-be power mongers.

I have an idea that part of our progressive idea that committed attached pairs should be equal comes from the ethics developed by Gay men though mostly it comes from economic necessity and the invention of the pill.  There is also a body of theory about a stage of human development when the emphasis is on community and buddies before puberty kicks in.  Thus “Two Little Savages” is set in a rural context.  Barrus' much darker tales are often in the ruins of industrial cities. Losing this freedom is seen as part of the curse of growing up, which was often explicit among the kids on the rez when I was teaching.

“Savages” is a problematic term that in Europe connotes the natural, the wild, and even the free.  It can also be used as a pejorative, so it has the kind of attraction/danger that is in writing called pornographic.  Maybe it’s not a stretch to say that “Two Little Savages” (which is entirely innocent in sexual terms} is a precursor of “Genocide”.  Barrus’ novel about astronaut lovers does not use the trope of the knowing savages, but rather space travelers that are our versions of ordinary things made strange.  (Isn’t a spaceship just a motorcycle crossing the cosmos?  Isn’t the Montana snowmobile that was just coming into common use in the Sixties another version of a motorcycle?  There are many ways of “Going Rogue.”)

If I were a French/Algerian philosopher (Algerians being a trope for the revolt of the dominated) I could go through “Two Little Savages” and make a literary case for this rather off-the-wall suggestion that might keep you from ever reading the book — or the opposite.  My comparison of the two authors could also address authors who are a little dangerous, who embody ideas we try to keep unconscious.  A boy’s struggle to be somebody known and significant as a grown person is universal, not even gender-assigned.

I suppose the basic pattern of both authors is in those stereotypical vampire-killing pretty girls.  My niece loved a previous Christmas book about a girl who crossed the desert with only a camel.  It’s a pattern that drives a need for justification and explanation in stories.  The backside of it is always fear of capture, of being made as toothless and obedient as a child.  This is part of my own character.  They say it comes from real experience with dominators and from many small disappointments and betrayals by people who could intervene but didn’t.  But these stories also offer visions of escape to a safe setting where trusting intimate equality is possible.

This stab at understanding is written in a pandemic, with old-age, solitude and prairie wind.  It won’t make sense to a lot of people.  But it is my safe place — as is the internet.

We all left Boy Scouts at the same time. 7th grade was the end of that. We were all so silent then. Just looking at the ground. We did not discuss it with anyone. Not even ourselves. One boy was damaged and had to have surgery. He showed us his scars in a park at night with flashlights. My parents made me go to our abuser's house and have dinner with his family. At the dinner table, he abused his wife -- and beat her mercilessly -- and made me watch. Scouts was a living nightmare. The organization needs to be SHUT DOWN entirely. It was a world of hurt. Then, one day the scoutmaster and his family just disappeared never to appear again. I keep think that time was up in our neighborhood. And he went on to greener pastures to abuse more boys. I was just glad to never have to look at him ever again.

The only guy I know who went clear to the top and did all the Boy Scout stuff is a covert Gay man with two daughters.