THE OLD LADY AND THE CATS ARE SLEEPING

Because my aging is alongside this pandemic, I’m having to rethink some strategies.  For instance, I had not thought in terms of a long preceding time of suffering before death and I had not understood how many people would dedicate themselves to saving me.  IF there were beds open.  I’ve thought a lot about “do not resuscitate” orders, including the one I endorsed for the nurse by phone for my dying brother which made my other brother believe I killed him.  She had used the shock paddles to revive his heart several times, but it didn’t stick.   The older brother had seen it work on television shows and believed them infallible.  As a hospital chaplain I had helped people make the decision.  I also knew the ailing brother had considered suicide.

Suicide today does not require guns and poisons.  The people in my congregations who killed themselves, mostly educated people, used plastic sacks and duct tape.  An empty champagne bottle might be alongside their body.  They died alone on purpose.

It is a continuing grief that Covid victims die without family and friends attending them.  My two brothers and I sat with my mother until she went into the kind of arched back breathing typical of dying.  It looks like the movie depiction of female orgasm.  “Agonal breathing or agonal gasps are the last reflexes of the dying brain. They are generally viewed as a sign of death, and can happen after the heart has stopped beating.”

I said a prayer for her just after she was gone, basing it on the Catholic blessing of body parts.  My brothers did not object: they were stunned.

I would not want others with me when I die.  I have no children and my birth family, both brothers, is dead except for estranged cousins who are as old as I am.  I consider death as private as sex and I don’t want interference.

Years ago I dreamt of a coming apocalypse and thought it would happen about now, about twenty years after the dream.  But I never thought so much would be involved.  The pandemic, the global climate, the politics, my diminishment — it’s been hard to assimilate.  I may have ten years of life left -- my mother was 89; I'm 81.  But I only made plans for twenty — not thirty.

When I moved here, twenty years ago, I explained to someone that I just wanted to be left alone -- including when I die.  She said, “Okay.  A woman who felt that way came here some time ago.  We just let her die.”  I hope she simply fell over dead.

I came to a new truth when I dislocated my shoulder and had to be driven to the hospital thirty miles away.  I called the sheriff’s dispatcher and she said, “Oh, it’s SO expensive to have an ambulance.  It would be better to have a friend drive you.”  But how can you do that in a pandemic?  Ask them to risk their lives?

The “doctor” was a former military medic who strapped me tightly into a velcro contraption that took me a half-hour to get off.  I suppose I could have used a knife to just cut it off.  He couldn’t cope with old lady boobs.  He also didn’t know any cowboys who took a hammer to their plaster casts.  I do.  He “prescribed” therapy in GF which I ignored.  I'm going to drive 80 miles with a hurt shoulder?  People told me how to do “therapy” with a can of soup for a weight.  I ignored them, too.  Being “saved” doesn’t appeal to me.  The shoulder is okay now.

When I watched “The Crown” it was a tunnel into memory because on early TV sets I watched Elizabeth II be married and crowned.  I’m aware that either or both Queen and Consort are close to the end.  I didn’t remember that Princess Margaret was already gone.  My favorite episode, and one relevant to this “what is truth” wrestling that is on Twitter, was about the painting of Winston Churchill that he burned in the garden.  He rejected that reality.

I used to give a sermon this time of year that was called “Stingy Receivers.”  It was a bit of a rebuke to people who resisted gifts from others but also it was a defense of those who saw through the attempt to get inside their boundaries by “helping” them, to bribe their emotions, to put the emphasis on the act of giving as a virtue when it was not based on knowing the person well enough to give something really needed — maybe because it was too expensive though not in terms of money.  Some people in those congregations had everything they needed but gave as little as possible, mostly by shutting out need.  Unless they could frame themselves as heroically saving others -- when they were only writing a check.

The worst threat I wrestle with is diminished mental ability.  I can rely on body memory and habit for a while, but if it gets to the point past beyond being able to decide on suicide, then I’ll likely be carted off to a nursing home where I’ll become something like an insect larva who will never leave the pupa. 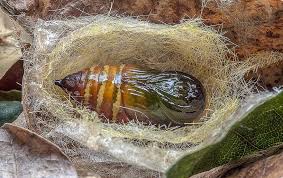 A pupa (Latin: pupa, "doll"; plural: pupae) is the life stage of some insects undergoing transformation between immature and mature stages. The pupal stage is found only in holometabolous insects, those that undergo a complete metamorphosis, with four life stages: egg, larva, pupa, and imago.  (Is an angel possibly an imago?  Holometabolous? Look ‘em up.)

Some of my life has been in big cities but this is a better place to be old.  Still, there are city features that I miss.  "From the inside", you could say, since it was 6 years on the streets of SE Portland and another 6 years in the Portlandia Building.  (Being born in Portland doesn’t count.  I was more real in Roseburg on South Deer Creek.)

Then there were the academic "cities": NU and U of C.  Despite the libraries, I didn’t want to stay.  I just took books with me.  I like seeing cities from a distance, a height, esp. at night with the lights.  All the crime shows include them, even the ones made in the far north.  But now I know people planet-wide in spite of never really leaving the NW except Hartford, Connecticut, for clergy internship.  (Chicago was the OLD NW.)  Now cities themselves — their characteristics — have become diaspora.  Good enough for me.  I don’t want to really be there.  I just think about it.

Posted by Mary Strachan Scriver at 12:04 AM