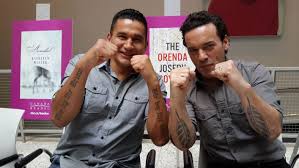 Once again Indigenous Canada is throbbing with controversy over who is or is not a “First Nations” author and whether they are illegitimately raiding the heritage of the People.  I was sent a copy of “The Orenda” by James Boyden some time ago but never finished reading it.  I’d better sit down and do that now, since it seems to be the pole around the issue-dances this time.  First I want to make some remarks.  (“Constant readers” will know I’m white but have a fifty year relationship with Blackfeet/Blackfoot.)

My approach to all these matters is through “deep time,” meaning history even before human beings, much less writing.  I accept as evidence the molecular and atomic witnesses of stones and trees, climate and evolved life forms.  Right now there is an unfolding of DNA evidence from the bone of a pinky finger of a little girl found in Siberia that has revealed a whole different branch of hominin.  Named the “Denisovans,” they seem to be a people whose characteristics (particularly withstanding cold) underlie the Asian populations as well as the closely related Native American populations, both those who came via the Bering Straits and those who came by sea along South America, in several separated waves.

This DNA matrix is the closest thing we have to “blood” relationships though blood is not the only body tissue created according to DNA instructions.  They are “germ lines” which is roughly the same thing as provenance, which is the same as the Biblical “begats” that obsess Euros since inheritance has been a controlling idea of entitlement to wealth and power.  Only a small proportion of contemporary human DNA still includes Denisovan protein instructions, similar to Neanderthal inheritance.

Now that we know about epigenes, which play the genome like the pedals on a piano, silencing or prolonging, we can understand why different locations support the development and persistence of slightly different appearance and culture, from nose shape to skin color to food tolerance.  Since the people in one place or another tend to develop likenesses among them, they have been seen as races.  But now that they leave, arrive and mingle around the planet,  the concept of physical “race” is not useful.  That “box” is broken.

So the concept label has slipped over to a culturally defined box, culture being a slightly different kind of class.  www.livinganthropologically.com › Biological Anthropology.  Jun 1, 2017 - “Race Reconciled is a special issue of the American Journal of Physical Anthropology with cutting-edge work by biological anthropologists”.

“Race is a Social Construction. It is a human idea about biology that does not correspond very well to the biology. But anthropology also demonstrates how race becomes biology, or the embodiment of racist inequalities.

“Three things need emphasis. First, as discussed in the previous section Race Reconciled Re-Debunks Race, this does not mean there is no such thing as human biological variation or this variation is unimportant.

“Second, to say race is a social construction does not mean it is not real. Ideas can be very real.

“Finally, we need to do more to close the loop, revealing how the power of race as a social reality has economic and political implications and the social organization of race becomes biology.”

So now here comes the newest idea:  that the culture confines of a labeled people can change them biologically.  Thus they are made into a physical race.  We call these cultural confines both privilege and stigma.

“ . . . a growing body of evidence establishes the primacy of social inequalities in the origin and persistence of racial health disparities. Here, I summarize this evidence and argue that the debate over racial inequalities in health presents an opportunity to refine the critique of race in three ways: 1) to reiterate why the race concept is inconsistent with patterns of global human genetic diversity; 2) to refocus attention on the complex, environmental influences on human biology at multiple levels of analysis and across the lifecourse; and 3) to revise the claim that race is a cultural construct and expand research on the sociocultural reality of race and racism.. Am J Phys Anthropol 2009. © 2009 Wiley-Liss, Inc.

"Biology is about organisms and environments, always about specific creatures in specific places, and not simply looking for a mythical code of life."

This study described below is stunning in its implications: that when we are angry with a particular group, we withhold care so that they are stunted.

“There is also evidence that structures and events at even higher levels of analysis reverberate to the individual level. A recent study of birth outcomes before and after September 11, 2001, provides a dramatic example. Lauderdale (2006) examined birth certificate data for all California births during the 6 months after September 2001, compared to the same period 1 year earlier. They found that women with Arabic names–and only women with Arabic names–experienced a 34% increase in the likelihood of having a low birth weight infant after 9/11. Moreover, the effect appeared to be moderated by parents’ strength of ethnic identification: Infants who were given ethnically distinctive Arabic names had twice the risk of low birth weight after the attacks of September 2001, compared to 1 year earlier. This finding hints at how events structured by global political-economic forces may have embodied consequences that are often hidden from view. (2009:52)”

There are two other forces I’m thinking about but I don’t know enough to develop any theories.  One is the marked difference between cultural matters on the east side of the continent versus the west side, partly due to time of encounter, partly due to displacement, and partly due to the whole Western half of Canada being basically a Hudson’s Bay franchise.  Population density is part of it, war patterns within the tribes or developed as allies or enemies of the primary colonizing countries, weather, distance, plagues, droughts.  Prairie tribes are drastically different from woodland tribes or waterway tribes but awareness of that is elusive.

The other is another “deep time” concept, the idea that if one looks at the planet circumpolarly, the northern continents were slowly covered by major glaciers that pushed out pre-existing ancient human groups near the North Pole.  Then when the last big glacier withdrew, the repopulation was accomplished by a people who had changed.  The same was true of the plants and animals, except for those which had found refugia like the Sweetgrass Hills.  This is new thought.

We seem to be in a time where thought about evolution of both biology and culture is vital because change is coming swiftly.  To me, this drowns much of the controversy about indigenous writing, but at the same time is helping to develop the New Culture that will carry our biological existence forward.
Posted by Mary Strachan Scriver at 4:12 AM

Well, if you're going to finish reading The Orenda maybe I'll have to also (dammit).

I'm thinking you're already tuned to this, but just in case here's a big Boyden think-piece published in Toronto's ... erm, Canada's biggest newspaper.

"Whisky" is the guy who sent me this book, so I'm SHOCKED that he hasn't read it! I did read the excellent think piece and also watched this Clip from a double interview, which is where I got that photo. https://www.youtube.com/watch?v=nRTm18Q5-Ws It's about reconciliation and I'll look for the longer program that this must be taken from. I don't know this program or interviewer, but you probably do. I'd like to follow it even after it leaves the aboriginals issues.

You know, "Whisky," the most vilified of the authors attacked from using an NA persona turned out to have an "Indian" credentials he didn't even know about. (I can't use his name without provoking more attacks.) When I was looking for my own "roots," I ran across the tribe that lists him, an early contact group on the East Coast. A Portuguese sea-captain married into the tribe and every generation since is traced down to the present. On the other hand, the nastiest guy to claim an NA origin is the author of "The Education of Little Tree." He was a bigoted Nazi and everyone knows it, but his imagined story hits the myth spot so it is "true." The U of New Mexico has made a fortune from it and it's a movie.

Boyden has produced a major body of work so I might have to resort to Interlibrary Loan and hope that stateside libraries have been paying attention.

The name of the show is "Q" and the website linked above should take you to other episodes. It's a "culture" show-biz base, not indigenous.

Wow, the Q snippets are quite a blast from the past. I am very familiar with the show. It is still running, but it nearly collapsed when host Jian Ghomeshi was outed as a rough-sex aficionado who didn't trouble himself to inform the girls he initiated it with before he started in with the choking and the slapping. Ghomeshi is now persona non grata on Canadian airwaves. And Boyden is ... ? Hard to say, at this point. He writes well, though, and up to the point of controversy he was a remarkably approachable guy.

Curiously, Boyden's controversy found its legs pretty much the day after he came to the defense of his friend, novelist Steven Galloway, whose sexual misconduct got him sacked from a university post.

I'm still mulling over it all, to be honest. And I probably stalled at the same point in The Orenda as you. Other things came to distract me, I guess.

Oh, you might find some interesting stuff here -- Unreserved, with Rosanna Deerchild

Thanks. I still haven't found my copy of "The Orenda" but I also discover that what I read had stuck in my head, so there's SOMETHING there. Made me think of "Montana Gothic" writing.

Also, I found Boyden's little book about "Louis Riel and Gabriel Dumont" which I bought because so many Metis from the Rebellion ended up here. Riel was teaching down towards Great Falls. The names and personalities persist here, esp. on the Heart Butte end of the rez.

The sexual stuff is a surprise -- I hadn't heard. It seems to be everywhere and I keep thinking that somehow it's related to this whole identity confusion thing. I mean, some of the transgressors don't seem to KNOW it's not welcome. And sometimes, it seems, it is.