TRIMMING THE TREE OF LIFE 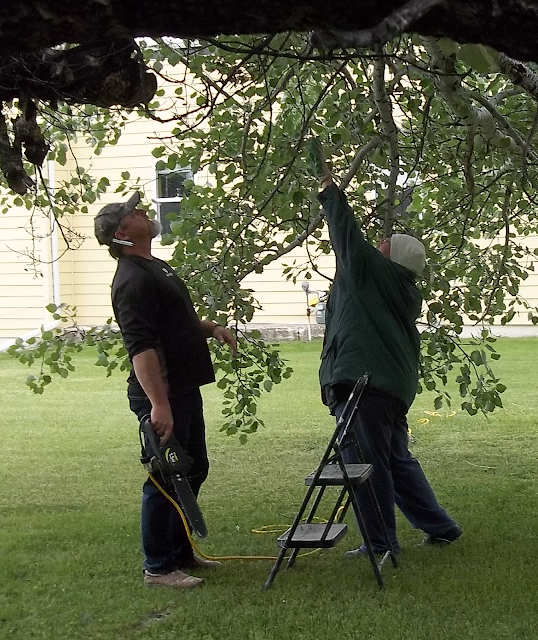 This morning while washing the dishes, I looked out my south-facing windows and saw a man with a bit of a belly and a lot of butt standing under my cottonwood tree.  He stood there a very long time, gazing up into the tree.  I thought maybe his kite or his cat was marooned up there.  I went to the front door and he came over to talk.  He turned out to be “Pastor Steve.” He was deciding which limbs he would cut off the tree.  Every pastor wants to show he's the boss by cutting on this tree as though they were circumcising it.  Cut, cut, cut. Make everyone else smaller.

I am not rational about this big old cottonwood tree.  It is part of the value of the house, but also it is a living ecology of birds.  Not so much animals — there are only ground squirrels here.  It is a kind of tree that was once sold all over town and it is dependent on water, meant to grow naturally along streams.  In its natural habitat it is meant to curve its branches down to the ground to shelter animals.  But it bugs the old men who drive riding mowers that make them stick up high.  They like driving tractors on wheat fields with no trees and straight lines.  They worship new mown lawns as a sign of virtue.  Sometimes a kid will mow the whole lot with a push mower.  One small kid had a power mower almost too big to handle and I feared for his legs.  Must be hard to get someone to do the job. I never see Pastor Steve out there.

When I worked for the City of Portland, brouhahas about hedges and trees were common.  The folk understanding of it is that a person can cut their own “half.” In practice, esp. if lawyers are involved, it was much more complicated than that, esp. if the tree involved dies as a result. Or if you factor in the value of the tree in hot weather or aesthetic value. The resulting rage only encourages some people because they think it is a sign they are winning.

I think Pastor Steve was hoping to start a fight on one hand and enjoying bullying me on the other. (My grass is too high.)  He drove his mighty contractor’s pickup onto the lot and set up his kitchen stool/ladder.  The old lady he brought for protection might be his mom.  She’s probably the one who tends the little flower edge in front.  She immediately took charge and directed him where to cut.

The deputy Pastor Steve called for even more protection was surprised to realize I’m 80. I look younger because I’ve never smoked and don't drink and grew up mostly in the rain in Portland.  When I told him my only sins were chocolate and cussing, he laughed.  Evidently Pastor Steve was impressed by my curses which were not entirely theological.  He did raise God as his source of authority.  I would make fun of his General Custer goatee but the deputy had one just like it.  So did Bob Scriver.  And Colonel Sanders.  They seem to feel it signifies authority.

In the beginning, 1999, when I moved in, the congregation was mostly old people, rural and conservative.  Over time they slipped away and for a while there was no one.  Their grass was taller then that mine is now.  Baptists have the same polity as Unitarians, meaning they are self-financed and supervised without a bishop.  They can hire clergy who have no education but talk a good line.  What goes down well in a place like this is folk religion as learned from television shows.

I’m sorry so many churches use Facebook, which has some really evil policies about what they do with the material.  I doubt “Pastor Steve” is troubled by that.
If you dare look, here he is below:

https://www.facebook.com/FirstBaptistChurchValier/videos/vb.133461636778289/609582229633480/?type=2&theater
My indignation is fueled by more than wanting protection for my tree.  This kind of “owning” things and bullying all competition is what has gotten us into so much trouble in this country.  Mostly identified as the beliefs of old white men of privilege, the idea is that if you can use God as the ultimate authority — as I admit this country does in its founding documents and on its money — you will be protected and righteous.  And you must be “Christian” and talk about Jesus on the proper days.  If you’re really good at it, you might found a mega-church.

I don’t think that’s what Pastor Dave is up to.  I think he’s just trying to keep his kids out of trouble.  This is a kid-raising church now, which means that parents rule and keep a lot of commotion going for the kids.  But when they leave for college or love, things go empty again.  The pews are back to holding the elderly and damaged.  Maybe fewer now that Covid-19 picks off a percentage of those who gather.

We’re all scared.  This Baptist church, like the Lutherans, Catholics, Methodists, has not really met except on video for months.  They’re guessing that this will be like a measles outbreak, but the experts are saying we may be going through on and off lockdowns until next year.  The economic situation is likely to last years, maybe a decade.  The last Depression wiped out the Unitarian churches of Montana, even the rather grand stone church in Helena, now a theatre.

I was hesitant to invite the deputy in because of all the cats but he said he was allergic anyway, so we talked on the stoop.  He says he is taking a special interest in Heart Butte which has suffered because of meth distributors.  I’m glad to hear that, since I taught out there for a few years.   He tells me the Sheriff's office is fully hired again after some major resignations a while ago.

I’ve never seen a tribal person go into the Baptist church.  I’d bet a dollar that Pastor Steve has never been to Heart Butte, though they have a Baptist church out there.  Here’s the URL to the Whitetail Baptist Church of Heart Butte which is 30 miles from Valier, but worlds away culturally.  Terrific photo of the butte itself.  No connection to the Valier Baptist Church or any denomination at all, which means it is described as Bible-based.  Quite a different sort of pastor.

Usually I try to get along with other clergy and so on.  But to have this know-nothing bully come over to power me down just triggers every bit of contempt and resistance I have.  Holding a tree hostage is pretty low.  Thinking one can push around a little old lady is mistake.  The last thing I needed today was to be blind-sided by this ignoramus.

Posted by Mary Strachan Scriver at 1:09 AM

An undated Google image of your house and the First Baptist Church shows a considerable over hang of the limbs of your tree. I wonder why the Pastor seems compelled to trim the tree. Even a riding mower ought to pass freely. To date the image, an American flag is at your door step. Pick up truck in driveway.