WHAT CAN BE DONE ABOUT COPS

There is effective and believable research on these recurring demonstrations and the bad behavior of cops, apart from being infiltrated by people who are not there for good reasons.  Here is one summary list

For elaboration go to:
https://www.youtube.com/watch?time_continue=11&v=1niaq51Z2Uw&feature=emb_logon

Here’s another element that scholars note:

https://doi.org/10.1177/0003122417736289
Abstract
"Largely overlooked in the theoretical and empirical literature on the crime decline is a long tradition of research in criminology and urban sociology that considers how violence is regulated through informal sources of social control arising from residents and organizations internal to communities. In this article, we incorporate the “systemic” model of community life into debates on the U.S. crime drop, and we focus on the role that local nonprofit organizations played in the national decline of violence from the 1990s to the 2010s. Using longitudinal data and a strategy to account for the endogeneity of nonprofit formation, we estimate the causal effect on violent crime of nonprofits focused on reducing violence and building stronger communities. Drawing on a panel of 264 cities spanning more than 20 years, we estimate that every 10 additional organizations focusing on crime and community life in a city with 100,000 residents leads to a 9 percent reduction in the murder rate, a 6 percent reduction in the violent crime rate, and a 4 percent reduction in the property crime rate."

I will add two more considerations:

Militarization taking advantage of Homeland Security and ICE to define immigrants, dissenters, and the like as criminals, thus allowing war policies on them, like concentration camps and disease wars where exposure to contagion is exacerbated by close confinement, poor nutrition and health care, separating families, and denying of asylum.  Even shooting across national borders, denying humanitarian attempts to at least provide water, and encouraging a “cowboy” attitude of being unregulated.

The other is the glamorization of opposition, crime, and an underworld of decadence that includes paid sex provided by captives, drugs, use of weapons, secrecy, corruption of law enforcers, blackmail, extortion, arson, and so on.  There is a kind of reward for criminals in pretending or actualizing cheap “luxury” with gilded furniture, marble walls, and other tacky indicators of imagined wealth and privilege.  Women with massive bleached hair, extraordinary eyelashes and breast implants; men with open silk shirts over hairy bellies and gold chain necklaces and bracelets.

I’m not talking about only NYC or Las Vegas.  Did I tell you a local rancher once took me to a strip joint in Lethbridge in an attempt to intimidate me?  There was no name on the building.  In back was a sort of wing to load vehicles without being seen.  The people, including performers, were like WH people, except no suits.  I was fascinated.  This was the fault of a fancy education influenced by French thinking. 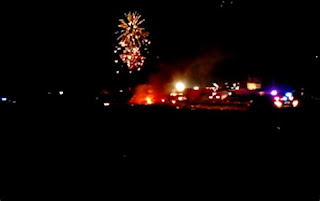 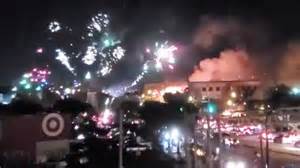 Last night in Minneapolis -- we are told -- it was demonstrators who brought fireworks to launch as the police precinct burned. It is claimed that stores were looted and burned by demonstrators as well.  The visual effect was cinematic, jeweled and dangerous.  It ought to have warned people to stay away, but in fact the toxicity and exceptional danger of it attracted some people to come closer.  Certainly it was great television content.

Demonstrations are both attractive and risky.  Ari Velshi is often a studio interviewer and presenter, but this time he was out there to see for himself and risk his own neck.  He took a rubber bullet in his leg but was not run over by a squad car and was not arrested as was the black CNN reporter.  Now we are all journalists with Smart Phones broadcasting from the scene and sending footage back to archives in studios -- real time.  The balance of media has shifted.  Trump thinks he can buy and control Big Media, but he cannot cope with all the Little Medias out there watching.

The elements no one is mentioning are the facts that it’s a warm spring after being shut up in quarantine, that there is no school where accountability is high, and that the risk to lives was far more from contagion than from law enforcement.  But you can't see a virus. When two weeks have passed, we will know who was killed by the demonstration.

Another factor, that has never been named before that I can remember, is the “game theory” planning of these demonstrations and that they are urged and managed by enemies of our country, both those in other nations and their collaborators in the US.  They have also been using the Internet to affect what happens, but in a highly unusual way not possible before.  For instance, they were able to shut down the Minneapolis Police Department internet and squad car radio communications.  We’re pretty sure they can control the energy grid to some degree and could have shut down the city’s electricity to create black nights.  I hope that by now the hospitals have generators and also people at home dependent on machinery, even their refrigerators, have generators or batteries.

Most chilling of all was the list of advice issued to Minneapolis citizens during this siege:  hook up and test your garden hoses and hide your dumpsters in case of fire.  Strengthen the doors.  Monitor events. Watch out for each other.  It is very much like advising the French resistance to Nazi invasion in the Forties, except quite open.  Exciting!  Just like old movies on TV!!

Don’t be seduced by violence wearing a negligee of righteousness.
Posted by Mary Strachan Scriver at 12:06 AM