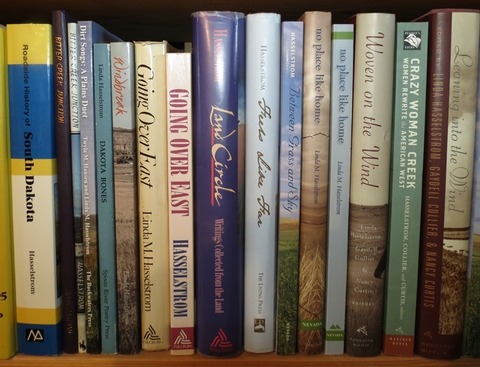 it’s a great irony that American thought and literature has been uber-rational for a long time, but the fascination with tinier and tinier anatomical scientific functioning of human cells has led to the senses as guides to memory and identity.  Luckily, there was always a school of thought that remained aware of the senses, particularly in regard to natural history.  This is often the key to Linda Hasselstrom’s writing:  what it is like to be a place on the land that is known in the very marrow of one’s bones.  It’s a matter of paying attention.  Most of these pieces are accounts of a day, the observations of what’s growing, what’s seen, and maybe a bit of research.  It is comforting and realistic.

Hasselstrom does not do “comparative culture” nor even “comparative religion” which is a big part of my education.  For instance, cemeteries are an important part of her life, but in my mind it has become a poisoning industry, taking advantage of nostalgia to sell toxic preservatives.  There is nothing wrong with her choices and I understand that the buckskinner part of her past was often painful until it died of its own limits.  Writers don’t have to be all things to all people.

Hasselstrom sharply understands publishers, which is why she published her own book in this case, so that she could present the evidence of her true life, one of witnessing and testifying about a specific place and way of life without it being changed one way or another to “make it sell better.”  In some ways this book is a “VITA” to present in contrast to academic sneering, so it lists awards, achievements, honors, in abundance.

https://www.amazon.com/Linda-M.-Hasselstrom/e/B001IXU0NU%3Fref=dbs_a_mng_rwt_scns_share
This link to an Amazon promotion ties Hasselstrom to Win Blevins, a “mountain man” writer who takes off on the fantasy that the frontier is quintessential “truth” about being a prairie rancher, one that completely eliminates the indigenous people — or even their cemeteries.  Luckily, this turns out to be a deadend for Hasselstrom.  She doesn’t do fantasy now.  There are no entries for indigenous women attending her retreats, though I recommend the idea.

Publishers, living in Manhattan and considering that fantasy to be the best way of being important and making money, have sickened me enough that I just don’t publish.  I write for myself and on an uncensored, unedited, uncorrected blog.  “Blog” is short for “weblog” and came from the actual practice of one person in keeping a journal log of what he read on the web.  The internet has been very useful as I try to keep up with the unfolding story of deep history, unlimited space, and electrochemical human sensory and memory mechanisms.  I don’t care that blog rhymes with frog, which gives it a bad vibe to nice ladies.  I like frogs.  In Kirkland, WA, we once did an entire Sunday service one spring, all about frogs.  That was decades ago, before the sequences of human-eating viruses that come out of the edges of predatory development.

Hasselstrom sticks to writing about her dogs, her house, recipes and growing things.  She’s not stupid, but she has chosen to stand her own ground with a willing partner.  Some people think that’s dumb or unsophisticated, but it has got to be a healing experience for her writing retreat customers, an excellent way for her to escape from publishers and go directly to readers.  Though she doesn’t exploit this and warns her people not to overdisclose.

One of the main things about writing is doing it all the time until it is woven into your brain and daily habits, but the other aspect is reading all the time.  To speak to and know other authors is another excellent experience.  To be able to encourage them as individuals in a sheltered place is what universities used to do before they became corporations.

Hasselstrom is a childless only child who is embedded in her birth family, both passed on and living, and she was close to the neighbors until they became “developed.”  Her legal ties are to her land.  She has her rough edges as described in this honest Kirkus review of an earlier book.
https://www.kirkusreviews.com/book-reviews/linda-hasselstrom/feels-like-far/  This is the nice lady who defended her practice of carrying a firearm.

I do not patronize other writers. My first writing class at NU encouraged that toxic MFA attitude.  Richard Stern’s writing class at the U of Chicago was only four women but sneering was not allowed and eventually he said it was one of the most rewarding classes he ever taught.  It surely was for me!

I think that women who retreat to Hasselstrom’s ranch will be enlarged and rewarded, whether or not they write. I’m grateful for this book that demonstrates how to witness and testify day by day.
http://www.windbreakhouse.com

Hello Mary,
Thanks for your good words about Write Now. As always, you put your comments in context; I especially appreciate “paying attention,” since it’s what I advocate so often.
I’m intrigued by your defense of Tim Barrus on the basis of your friendship. I always assumed that personal friendships shouldn’t influence a legitimate, professional review. When I encounter a bad book, or a bad review, by someone I consider a friend, I politely ignore it. Even friends can make mistakes.
Since I had no idea you were friends, I hadn’t read your blog about him until your comment. I would have sent you a copy of the book anyway, assuming that you could separate your professional opinion from personal considerations.
I’ve always assumed that you were ferociously devoted to the truth, one of the things I respect about you. Since you did not say that Tim Barrus is a Navajo, I likewise assume that he is not.
Surely we agree that “writers don’t have to be all things to all people,” and I’m sure that if the subject of my cemetery observations were the toxic side of the industry, we would agree more than we disagree. I don’t recall if I mentioned it in the book, but I am certainly against typical funeral preservatives.
I’m also surprised that your comments didn’t touch on the book’s purpose, which is to provide aspiring writers with examples of how the life of a serious writer develops and progresses. A considerable amount of teaching worked its way into the book, and an important aspect of it was encouragement for writers at different stages of their lives.