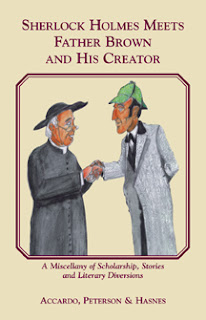 At the moment Netflix and I have settled into a truce.  There are films I actually enjoy, esp. my BBC mysteries.  I dole out the serieses one episode at a time unless one really grabs me, like “Luther” or “Jack Taylor.”  I like the intense near-underground exceptional-male ones, but there are milder stories now:  “Shetland,” “Doctor Blake”,  “Midsomer Murders” (it can get a bit silly -- but I like the dog), “Poirot”.  The only female lead that was intriguing was in “The Fall.”  Sub-genres are appearing: four or six part mini-series that are all one story and can feasibly be watched at one “sitting,” versus on-going casts that chug along for years, adding more outrageous characters and getting sillier by the year.

Lately I’ve been interested in “Father Brown” and (less so, since it’s not on Netflix which is my only paid provider) “Brother Cadfael.”  Until I looked up “Father Brown,” which I vaguely recalled was not just a period drama but also the series of C.K. Chesterton mysteries and three versions of them over the years:  1934, 1974, and the current one from 2013.  I think there may be standalone movies.  The mysteries themselves are often philosophical questions — maybe even spiritual which change over the years.

A few days ago I found a fascinating discussion comparing “Father Brown” with “Sherlock Holmes” but I failed to mark it and it disappeared back into the algorithm-driven swirl of clues on Wikipedia.  (I had to go to IMDB to pick up the dates of the early “Father Brown” versions.)  The gist of it, as best I can recall, was a juxtaposition between the two detectives as they reflected an historical schism still very much alive today: technology vs. humanity.

Sherlock is seen as a technological and reasoning man, one who picks up trace clues and extrapolates (always accurately) about what they mean.  He is a Doctor Spock of detection who is not moved by emotional motives -- only circumstances, timing, and material culture as indicators.  This would reflect the interest in archeology and growing criminology at the time of writing.  Watson is then the man on the cusp of this Aspergergian style vs. a traditional doctor with warm human connections.  Doctor Blake is similar, but it gets him into trouble.

“Father Brown” was originally a mouthpiece for Chesterton, who is wonderful to quote, still timely.  "The whole modern world has divided itself into Conservatives and Progressives. The business of Progressives is to go on making mistakes. The business of the Conservatives is to prevent the mistakes from being corrected.”  Coming from a Unitarian family, he kept the value of reasoning but factored in what some would call the supernatural as he backed himself through High Church Anglican to Catholic.

He is not above giving classic advice to the villains. He entreats the character Flambeau to give up his life of crime: "There is still youth and honour and humour in you; don't fancy they will last in that trade. Men may keep a sort of level of good, but no man has ever been able to keep on one level of evil. That road goes down and down. The kind man drinks and turns cruel; the frank man kills and lies about it. Many a man I've known started like you to be an honest outlaw, a merry robber of the rich, and ended stamped into slime.”

Father Brown’s skills are said to be the product of hours and hours in the confessional, listening to troubled people and trying to understand what would help them, as well as days filled with observations of how people interact.  One could say he had an earned gift of “discernment” which is defined as follows:

1 the ability to judge well."an astonishing lack of discernment”
2 (in Christian contexts) perception in the absence of judgment with a view to obtaining spiritual direction and understanding."without providing for a time of healing and discernment, there will be no hope of living through this present moment without a shattering of our common life"

My seminary is now very concerned with how to discern discernment, esp. when it comes to vocation, which is whether a person is suited for the role of congregational minister.  In the end it must be determined experimentally by giving it a try.  The problem is that congregations and ministers are so assorted that one mismatch doesn’t tell you much — it takes a series of them.  But the pressing need is that the model is emerging from a previous idea of a near-demonic exceptional and powerful exemplar to something more useful, less dramatic.

So far as detectives go, discernment is also a product of experience and that means the formerly wicked and violent may become persuaded of the value of a quiet helping life.  “Brother Cadfael” is thus able to become potent when the situation can only be resolved that way, and he is vulnerable to romantic love.  “Father Brown”, who carries a sword cane in the original version, now carries a furled umbrella.

The story lines tend to be illustrations of the necessity of tolerance for those who are different, even if they’re a little below the respectability standards of his two watchdog ladies, one Irish and one Gentry — both Victorian.  The mildly wicked reprobate who drives for the Father is useful for plot-lines.  And there is a refugee, though she’s a beautiful Polish woman willing to do scutwork.

Returning to the snipe hunt of search engines, I locate a whole “field” of discussion based on the study of Sherlock and Brown, including fiction in which both are present.  I guess this is “fan fiction,” unless it’s seen as a form of debate, which I gather is the origin of the characters in the first place.
http://www.batteredbox.com/PasqualeAccardo/SHmeetsFB.htm

“During a century of diverse Sherlockian studies, close detailed attention to the almost contemporary Father Brown stories of G.K. Chesterton remained in its infancy. Brownian researches have begun to appear sporadically in the last two decades. The purpose of the present volume [see cover above] is to collect some of the fruits of these infant researches in order to stimulate a greater appreciation of the significance of Father Brown to the history of detective fiction as well as one aspect of the subtle and often underestimated fictional art of GKC. . . .
“Comparative studies on both Sherlock Holmes and Father Brown are especially apropos given the friendly relationship between their creators, Arthur Conan Doyle and Gilbert Keith Chesterton. Indeed, Father Brown was a composite of both an homage to Holmes and of a criticism of his more restrictive methods. Situating Brownian criticism in direct contiguity with the paradigmatic Sherlockian model opens a whole new area for Holmesian studies.”

Whatever we “discern” about each other is always a construct, always a fiction, always a mystery.  We become ever more aware that our law system doesn’t work anymore, partly because the laws were never meant to address phenomena so deep as social change and scientific revelation, and partly because we realize now that all law is political, based on control and profit.  Privileging individuals or classes has become less pressing than reconciling the future of the planet with the intentions of the human masses.  But it’s useful to ask “what would Sherlock Holmes say” or what would Father Brown see as the crux of this dilemma?

To tell you the truth, I’d rather sit down for coffee with Luther or Jack Taylor: modern, gritty, experienced.   I’d probably start a political firestorm if I invented a Blackfeet detective who has an ambivalent relationship with the FBI.  As Father Brown would say, "hmmmm."

Posted by Mary Strachan Scriver at 11:07 AM