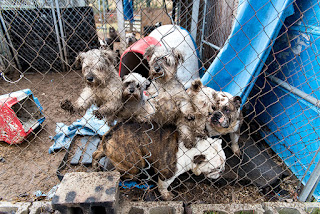 It’s tipping my hand (liberal eclectic) to let you know that I admire Rachel Maddow, but maybe I’ve already given it away.  I don’t always see eye-to-eye with her, but I almost always understand what she’s saying and share her point of view.  Old episodes of her program are available on YouTube and this morning I watched the one I link here:

The point of the commentary was the USDA removal of all records of animal business inspections — made for purposes of health and cruelty prevention — from their website.  She is baffled about why this would be done.  While opposed to any diminution of information, she’s assuming the same mental map of pets that other upscale nice people follow, a very limited one.  My five years as an animal control officer was consciousness-raising.

First of all, the persuasive power of pets is quite similar to the power of children, a biological emotion of enormous strength.  And animals, domestic or not, have an incredibly strong drive to reproduce so there is always a steady stream of them, some self-determining — that is, not “owned.”  To sell puppies and kittens in a pet store is like selling candy, except that since the little beasties are biological, they are prone to disease and suffering and can’t be standardized like widgets.  But they can be rather like raising Chinchillas, “guaranteed to make money.”  Until they are not.

Every year at Easter people have to be urged NOT to buy chicks and bunnies for their children to play with until they die.  Little turtles have been safer since people realized they carry salmonella.  In China the government has just made it illegal to eat puppies and kittens.  On the other hand, Asian chickens are always turning up with new diseases.

Rachel couldn’t see why anyone would reject regulation of innocent puppies and kittens.  There are several layers of scandal here.  One is that the Humane Society of the United States has tried to create the idea that they are the ONLY humane society, when in fact there are dozens.  They have tried to displace the USDA as certifiers of virtue, like preventing cruelty, but humane societies do not have the skills nor the motivations to detect, track and address disease, which is one reason — just like food — why the USDA has an interest in pet trafficking.  (We’ve largely forgotten the horrors of rabies which is still happening overseas.  Nor does the average person think about leptospirosis or flea-vector diseases.)

Some humane society people are idealistic, honest and effective.  Others are grandiose bullies who just want control.  They will tackle circuses, zoos, and aquariums in the interest of something rather like extortion.  Not that I’m defending these beloved cultural traditions, but some people far exceed reason with their zealotry.  Passionately progressive thinkers want to define chimps as human beings, agricultural confinement as cruelty, and eating meat as barbaric.

They do not want you to think about the shelters that must deal with the constant flood of domestic animals that come from everywhere: ferals, satellite animals semi-attached to households, family pets who remain fertile, and an array of kennels of widely varying quality.  Boxes and boxes of baby animals are brought in to shelters for disposal:  scroungy mutts and fancy breeds that are abandoned, unconfined, neglected, ignored, or treated like human beings in inappropriate ways.  No one wants you to think about the mounds of dead bodies that result from having to euthanize pets for lack of food and care or simple space.  Or the problem of what to do with the bodies.

Cruelty laws are mostly local and cruelty is often produced by neglect of and by the humans who may be poverty-stricken,or deranged by rage, or displacing their human relationships onto animals.  It is not only sheep who get fucked.  There is also a close relationship between crime and vicious animals — think about pit bulls and dangerous neighborhoods, meant to protect but adding risk.  Far more work to do than what USDA regulations address.

Regulation in ag and science contexts are a USDA area that HSUS has tried to enter with some success, justifying it with cruelty concerns.  Humane handling and killing of food animals is mega-buck territory.  Testing for cosmetics and meds is another huge monetary bonanza affected by regulation.

A competing institution or cluster of institutions that would like to get the USDA out of their hair is the dog fanciers.  If you read the blog called terrierman.com, you will have been educated about how middle class Victorian seekers of hobbies and social status managed to create imaginary breeds out of true natural categories of dogs and cats that developed by responding to work and environment.  Then because of their ignorance about genetics, they have enforced rules of inbreeding for the sake of “papers” that have caused torturing deformities like pushed-in faces and collapsing hindquarters.

The AKC pattern is based on racist assumptions about humans, certain people being “high bred,” denying the hemophilia that destroyed many royals.  At least they realized the problem in time to draft Lady Diana so she could produce two much happier and healthier sons.  Now if the Brits could stop thinking all bulldogs are Winston Churchill, maybe the dogs could be spared conceptions and births only possible with veterinary help and faces that prevent breathing.

Most orderly self-sufficient urban people take animals for granted in the same way that they are blind to ghettos, poor people, undocumented immigrants, old people, and were once blind to gays or domestic abuse.  Animal life is our lives, one way or another, and just as animals try to survive, some people try to turn a profit on animals.  But there are so many available for free, indeed, pressed upon anyone who will take them, that there’s only profit if corners are cut in terms of veterinary care, records, national and international tracking — esp. in terms of exotic pets that can eliminate whole species niches.  The aquarium trade in exotic fish is served by poisoning ecosystems.  Animals from race horses to fancy rabbits are sold as ways of propping up status.  Another category of militant ignorance.

A huge and growing body of law about international commerce includes as much regulation as actual legislation.  Another body of law in the environmental context — protected species — has become a target of ranchers who get shut down or people building big industrial transmission lines of pipes or wires that can be blocked in the interest of preserving little mammals or birds — even butterflies.

Around here we heard rumors of a remnant species of earthworm three feet long and smelling like lilies that had survived the glaciers by digging down three feet into the ground of the Sweetgrass Hills..  It is a real species that also survived over in the SE Washington State area called the Palouse.  A scientist came to investigate, but as soon as it occurred to the people who knew about the worms that they could be invaded by curious Feds with restrictions to impose on their land, they clammed up and denied everything.  Those are the people Trump pitches to when he needs votes.  He’s not much of an admirer of worms, but lately the USDA discovered that his own food management at Mar-a-Lago is breaking safety regulations.

We need to know all this stuff.
Posted by Mary Strachan Scriver at 5:19 AM