POLITICAL DISSENSION IN THE UUA 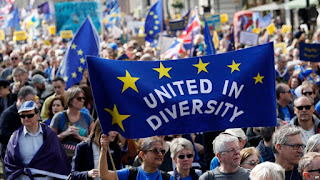 “I’m against this sort of thing!” says the placard carried by a nice lady in a New Yorker cartoon.  I used to joke that if someone at coffee hour in a UU church declared they were a cannibal, someone else was bound to say,  “Oh, have you met X?  She’s a vegetarian!”  Thus demonstrating that they had not gotten past the idea that if people were both interested in food, they had a lot in common.

But nice people are even more confused about what a religious denomination should be, or even a congregation.  There are two kinds of churches:  parish churches that define themselves by geographic boundaries, like Catholic churches, who technically include everyone in that area to be of concern to that church.  They date back to the centuries when the only religious choice was a parish church because it was part of the structure of the state.  There was no alternative.  Someone remarked about Switzerland that each “canton” (or whatever they called their basic area) should have either a priest or a policeman in charge.  Both were meant to preserve order by their vocational means.

The other kind of congregation is called “gathered” and came into being with Protestant schisms over doctrine.  People sorted themselves by their convictions.

But always in the background is the Nieburian observation that the primary force of gathering is socioeconomic level.

"The social sources of denominationalism".

If you were wealthy and fancy, you went Episcopalian.  If you were principled and austere, you went Quaker.  Like that.  So one of the key discomforts of the UUA — since it “doubled its U’s” in 1961 by merging with Universalism — was that socio-economic break between Unitarians who were urban, educated, rational people (“God’s frozen people”, if you want to be pejorative), and the more rural, Jesus-friendly, not so fancy Universalists.  I don’t think most newcomers to UUism know about this.

It’s a chafing, not unlike the difference between the “Americans” and the Canadians, which never merged.  In Canada it is the UUSC that is known and admired.  Breaking the CUC ties to the UUA was seen as liberation.  But there’s no reason why American UUA congregations should have to repeat the demographics of all the citizens of the United States. They are “gathered” congregations and more than that, are governed by congregational polity.  That means that each congregation governs itself and can do what ever it likes.  The UUA organization itself is NOT a congregation and has no polity, except the rules for being a corporation.

Harlan Limpert interned at “my” church, so I knew him rather well.  We’ve both changed since then.  He ought to be a competent interim administrator and “neutral” though he's another old white man.  People say profit is the great equalizer, so it's an advantage that he's spent much of his career at Target stores.  Profit in the context of the UUA is membership numbers.  Theoretically, the UUA serves the various congregations without imposing rules.

In the past the Unitarians have been accused of claiming every outstanding figure with humanist leanings as “a Unitarian without knowing it.”  We loved prestige and the implication that all members were brilliant to some degree.  So it’s an interesting variation that people of color want to be included because they are also brilliant and want that marker.  Though I haven’t heard about many Asians petitioning to become UU ministers and serve on the UUA board.  They’re already considered achievers and maybe Buddhism tops Unitarianism in mystique.  Some people claim both.

There has always been a streak of rebellion, or at least alternative thinking, in the Unitarian movement.  Emerson was a good example.  He made trouble by refusing to offer Communion.  In fact, the Transcendentalists were technically heretical in the beginning though everyone is happy to claim them now.

UU’s would like to think that their denomination is meritocratic, but that doesn’t seem very American.  Everyone knows — though they pretend not to — that all organizations are pretty much a matter of networks — usually “old boy” networks.  There IS a black “old boys” history which has been recorded by Mark Morrison-Reed.  (I was at Meadville/Lombard with him.)  I’m not aware of any “old girls” or Chicana/Hispanic networks.

But the denominational style varies markedly according to geographical sociology.  The sophisticated tell jokes about “hot tub” California Unitarians.  That’s quite aside from Garrison Keillor’s gentle mockery.  Which is usually pretty accurate.  Unless you’re talking about Goldwater Unitarians in Utah, which are way off to the Right instead of the Left.  UU’s are generally just “different” from the mainstream, but the local mainstream might be different from the rest of the country.

All this is a little too much for most young reporters who are asked to interpret religion, which they think of as "like" Christian, as presented by generations of film writers.  The real dynamics are family in the most bitter and intense terms of yearning for inclusion.  Even in Unitarian terms, this is not necessarily rational.  In Universalist terms, anyone should be included.  Everyone should be included.  UUism is NOT a religion.  It's a coalition of like-minded actual people who have formed congregations.

I remember one Sunday morning decades ago at the West Hills UU Fellowship in Portland, OR,  a gentle group of artists and thinkers in a Thoreauvian sort of church.  I attended occasionally.   One Sunday service was about falconry, and the “falcons” were there — flying free and perching in the rafters.  It was wonderful, but that’s not the Sunday I mean.

On this occasion a man blundered into the sanctuary without understanding what sort of congregation it was.  When it came time came for announcements, the man went to the front and began to testify in the Pentecostal style.

This group did not have a minister, but it had a president.  She went to the man, stood by him, took his hand, and suggested that his story was impressive but it would be better to tell it during coffee hour when people who were truly interested could listen to him without it interfering with the scheduled program.

He didn’t quite understand where he was, but they understood pretty much what was going on with him.  He didn’t fit, but they didn’t want to just throw him out.  If he had become violent, they would have met that challenge and tackled him.  But he broke his trance and left on his own.

It’s a nice little feel-good story and a true one, but it’s JUST that and not much more unless people take it to heart.  And I mean all colors of people.  This guy was lucky he'd found a mellow group — some big fiery male ministers might be less tolerant.  A formal church might have caused the ushers to hustle him out.  A rude one might have shouted him down.  A co-dependent congregation might have sat there for the next hour listening to the fellow rave while they secretly fumed.