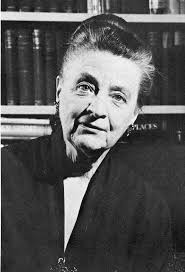 There’s nothing in this radio interview that would shock anyone or surprise anyone who has heard AK speak before.

She takes her usual shot at the star system that distorts the craft of acting by so celebrating one person that it amounts to congratulating the piano for a gorgeous concerto.  I mean, there are a lot of elements involved in theatre and not all of them are garlands around the neck of the player.  But I also think that she falls into something like the same trap by speaking of people with “gifts.”  It’s certainly true that some people have capacities that others don’t have and that capacities are more easily developed in some people than others and even that some people have no capacity to learn acting in the hard, long-term, sometimes painful ways that are necessary for "high" standards.  But maybe it’s as much a matter of desire as of giftedness and AK has always had a firm grip on that.  Is desire a gift?  It can drive you crazy.

Following her thought, I’ve gone ahead into other art forms and the contemporary research on brain function (which is more properly seen as a function of the whole body, which is another thing she fully grasps) to define any art as the management of consciousness.  First one learns one’s own “connectome,” which is the system of nodes of understanding and interpretation connected to each other in the brain in something like the way chords can be played on a piano keyboard.  These are composed of neurons “who” play memories together to create empathy and evocation, first in the artist and then in the audience.

Some people learn this urgently and early.  Consider the abused child who must first protect him or her self enough to record what happens and then try to find the pattern in it.  When is dad beginning to move towards a drinking binge?  When is mom about to run away again, only to return bruised and exhausted?  By googling one can find lists of ways to control a child about to have or beginning a tantrum.  Some of the same strategies work on adults when practiced by kids or other adults.  Check it out.  Children don't have to google to find out how to control adults: it is instinctive and learning combined. 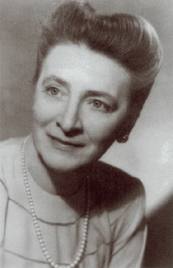 The difference is that a child cannot consciously control her or his own connectome: not until there's enough brain power to connect.  Otherwise a neuron filament reaches out for a skill or interpretation that’s not there yet or that meets a contradiction.  An adult, particularly one teaching acting methods that influence the connectome of others, supplies or evokes what’s missing from one's own brain connects -- maybe by supplying information, maybe by expressing confidence that makes enough space and time to figure it out, maybe by being a role model.  AK did all those things.  She had a powerful need to shift your consciousness into effectiveness.

If everything she tried met a stone wall, for whatever reason, she told you to get out -- that there was nothing she could do for you, and that was true, though most people took it as an insult and the thought didn’t get to them for a while that maybe someone else COULD shift their consciousness to a new place.  Or maybe over the passage of time, the needed node would grow in, the nerve axon would reach out and find AHA!!  If the desire was there, the person would find a way to learn somewhere somehow.

When AK failed, her attempts to "wake an actor" could be cruel out of her frustration with her own limits.  She was conscious enough of herself to know it and probably repented quietly alone at night, but she was a very self-disciplined person who could not easily be governed by others.  She knew it was collateral damage but felt it had to be done to get to the goal.  I'm deducing this -- she never said it.

The interviewer and AK agree that some people have a desire so strong that it amounts to a constant driving need to create forms.  Schilpp’s “expression of the relationship between a person and the universe.”  But then AK goes on to the necessity of knowing where that desire, that need, comes from in the first place.  Look at the character.  Is it because of trying to avert attacks, feeling that is a way of evading danger?   Is it a conviction that it will confer status and that status is a kind of safety?  Is it trying to fill an emptiness?  Is it trying to justify oneself to a harsh judge remembered from early in life?  Is it boredom?  This is the playwright level of need.  The level of need on the actor's part had better be invested in the needs of the character portrayed.  “How can I show what drives this character?” 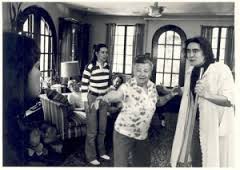 The two women agree that the need to touch other people’s lives and make them complete propels art forms, but particularly the art form of teaching.  AK uses a phrase, “touching off,” which is like lighting a flame, touching off a fire, somehow kindling the person’s ability to operate their own feeling system.  She speaks of blindfolding people to get them to understand what it is to be unable to see.  In class and rehearsals we watched her as she experimented, maybe going onto the stage in the middle of the play, prowling around the actors, whispering in their ears, slapping them on the shoulder, tugging at them, all to get them to shift out of being stuck playing chopsticks instead of the melody.

The interviewer mentions the work of group therapy and recalls interviewing Virginia Satir.  She feels this work, which is just beginning in this time period, is very much the same sort of thing -- working at “touching off” the right awareness to free a person’s stuck brain.  These groups often use movement.  Satir’s speciality was family dynamics (nodes and connections) and the paradoxical impact of clumsy efforts at “helping” (secrecy, forcing behavior) becoming greater damage.  I think that AK was very much in tune with this sort of work and that her teaching and acting Method were as much informed by it as Stanislavsky’s sense memory.  There was a secret, closed, advanced class for only a few invited people.  Even now no one will tell me, but I think it was for the exploration of the actor's own inner life. 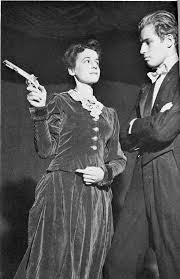 But the interviewer focuses on acting and not on how this applies to the play as literature performed to demonstrate something about human beings.  AK asserts,  “no man [sic] is alien to me” but her examples are nationalities, cultures.  As always she goes back to Hedda Gabler.  These are well-trodden paths.  One wonders what would “touch off” a post-Edwardian consciousness, knock her out of her comfort zone.  One had the feeling that it had happened to her at least once when she was young.

I suspect the sudden realization of danger as in her last years at NU "touched off" insecurity and a desire to go underground.  She was always circumspect, diplomatic, with authority figures, but I don’t think she had ever really felt vulnerable even after various challenges.  Her life had been a continuum of considerable depth and reward but she had mostly played it safe.  Even at forced retirement she had a second house, a reliable partner, a body of defenders and other resources, and soon she found her feet again.  But just as we are tempted to speculate on the inner life of actors, we are curious about the inner life of teachers. 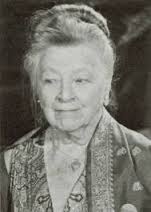 Alvina Krause was a small woman who stood tall, the youngest of sibs, trained as a speaker more than as an actor, and at first protected by powerful people, particularly Dean Dennis of the School of Speech.  I think there was always a little edge where she was not that confident of what she might call her “gifts,” (I would call “capacities”), where some things could touch off core vulnerability.  Lack of control, for instance.  The effects of modernity and surrealism, existentialism.  She was essentially American, thus rejected despair and could not get her mind around concentration camps or African heart of darkness --horrific things that are not censored these days.  But she doesn’t SAY “nothing human is alien to me.”  She says (I'm paraphrasing), “An actor must always work on the premise that nothing human SHOULD be alien to me.”  In short, she was a universalist, a progressive, a person of her time and place.