"WHEN THE WHOLE COUNTRY WAS 'ONE ROBE'" by Nicholas Vrooman 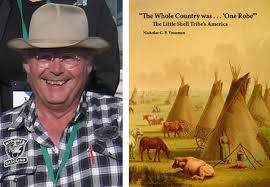 The categories of “public intellectual” or “independent scholar” are not really in the consciousness of most people.  There’s no money in it and not much prestige.  One needs an institutional connection to make it worthwhile to propose such “hunter/gatherers” for honors or whatnot.  Their office is their back bedroom or the space next to them on their pickup seat.  Nevertheless, they are a major part of some public dialogues that have important consequences. 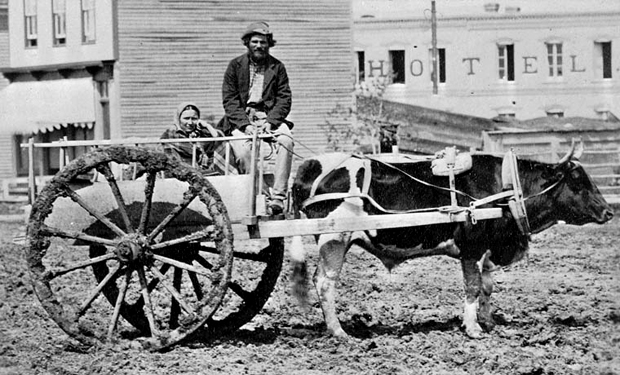 “The Whole Country Was 'One Robe'” comes from that context.  Nicholas Vrooman has moved among organizations focused on “folk ways” for a long time.  This has taught him the trails of the first All-Terrain-Vehicles, namely the two-wheeled Red River cart.  The ways of these drivers were as braided as their “breed sashes,” the kind Charlie Russell wore.  All the time in the centuries that the European countries, barely defined, were pretending to sell ownership of the new American continent back and forth among them, occasionally even engaging in battles over the boundaries, there was a virtual nation forming by blood relationship, Catholic faith layered onto prairie practice, friendships between families and men who grew up together and hunted together, long wintering and sharing, many a song and jig, and the commercial exploitation of bison, small furs, and the interface between arriving Euros and people already in place, maybe for millennia. 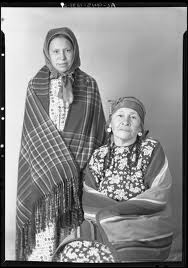 Many things cultural, biological and ecological have come into focus in recent decades, partly because of the internet, partly because of opening such archives as the Hudson’s Bay factors’ records, partly because the eyes that are looking now are in the heads of the people whose ancestors were there, and partly because of shifts in method -- we see things differently.  Justice issues once smothered by convenient political allegiances have bobbed up again.  Population demographics, that slippery subject, are demanding realignment.  There are more people, they are different, they have moved, and life itself is on new terms.  Was there a computer internet overlay for tribes before? There is now.  Were there essays comparing Euro ways of thought, teasing out the assumptions, to indigenous ways of thought?  Many now.

Technology jogs us in other ways.  Satellite images of the planet make us see things a whole new way without all those imposed lines and colors to indicate national ownership.  In a satellite picture, the land is self-evident.  The other technology that has made a huge difference is simple photography.  Can you ever think of Metis as just buckskin Indians after seeing the bride in her white dress in the last post?

After I read this book, I look around the community and see Little Shell Cree Chippewa everywhere.  Of course, I was always aware of the rez people, esp. in Browning, who were -- as the kids said in taunts -- “Creeeeeeeeee.”  In the white community it was said that if you wanted someone who would work, you looked for a Cree because they had to work to survive, they would work for low wages, and if one quit, there were plenty of others.  A cynical view. 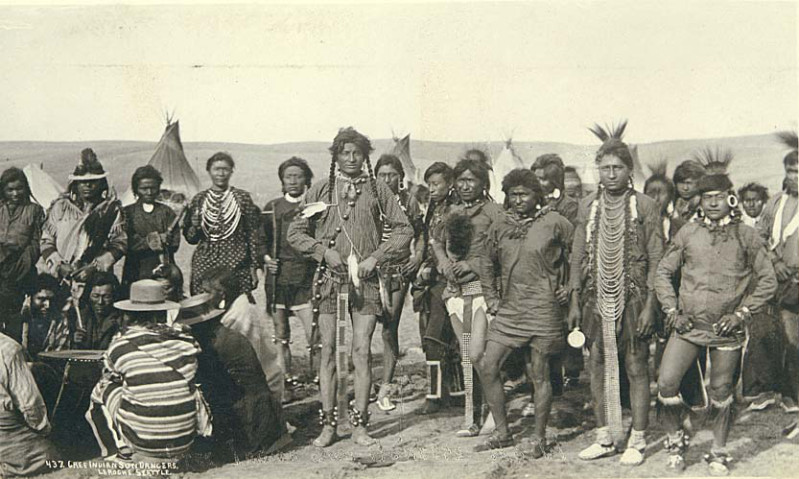 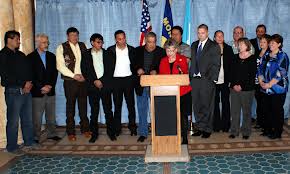 On page 340 in this book is a photo of a young mother and her boy.  It’s Mary Flammond and her son Albert.  Mary was the main counter clerk at Teeples, which in the Sixties was just one little store in Browning.  Albert was one of our best town police chiefs, when the town still had its own police force.  Calvin Augare was Bob’s best hunting partner, Ken Paul became his son-in-law, Cecile Horn was his “Indian mother”. A LaRance babysat his house if he traveled, and a Belcourt tried to destroy him politically.  I never did see the Bremner girls mentioned in this book but a Salois was my UPS man for years.  We think of the Blackfeet rez as being wall-to-wall Blackfeet with a nice solid line around it -- but that was never the reality.  It doesn’t even work that way with the 49th parallel border which was negotiated between European nations in London long ago.  Not even Homeland Security can keep the rabbits on one side or the other. 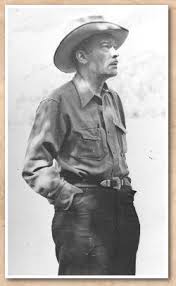 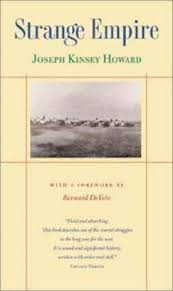 As Vrooman points out, the story has been a bit skewed by the dramatic tale of the Red River Rebellion, as told by the beloved  Joseph Kinsey Howard in “Strange Empire.”  Though the people hoped that removing “Rupert’s Land” from the clutches of the Hudson’s Bay Company, which was the loom that wove the fabric of the Metis “nation”, meant that there was enough of a jurisdictional interval to start a new country, tragically that’s not the way things turned out.  The people returned to their diaspora across the prairie in the rhizome-stolon pattern of sweetgrass and strawberries, a system of communities and the corridors across the land to connect them.  Vrooman calls it a Moccasin Flats Archipelago. The people moved along those patterns like blood in arteries, pulsing according to the seasons.  They continued to move in and out of Canada, not as refugees but as cousins and compatriots.

This book serves the Cree -- not just the Little Shell Cree Chippewa tribe -- in the same way as the Blackfeet are documented by Adolf Hungry Wolf’s four-book compendium combined with the Foley Report (a xeroxed near-underground lawyer’s research on the management of the reservation, particularly irrigation), plus Paul Rosier’s “Rebirth of the Blackfeet Nation, 1912-1954,” and Bill Farr’s “The Reservation Blackfeet, 1882-1945.”  All basic history.  Over the years occasionally a “Cree” who has been quietly getting along in Blackfeet country has asked me whether there was something they could read about themselves.  I could recommend “Strange Empire” but this book is far more relevant and extensive.  Still, I would say, "Read BOTH."

Since the time when Howard was writing, thought about human society has changed quite a lot.  In fact, when I took on reviewing this book I told Vrooman he wouldn’t hear from me for a while because I would just read and read for a couple of weeks.  It’s over 400 pages long, after all.  But I found myself getting excited over spotting something -- “Look!  There’s Eula Churchill Sherburne!”  (She wasn't a Cree -- her daddy was the Indian agent.) and sending him emails.  He’s gotta be laughing at me. 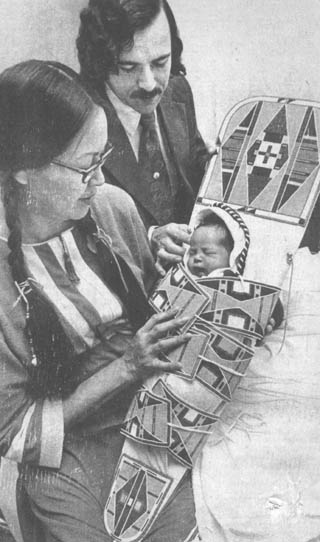 Gary and Louella made this cradleboard for their newborn, also named Gary.

I remarked on the unusual absence of typos, grammar errors, and misspellings in this very big book.  He responded:  “Once had a conversation with a good ol' Metis friend married into the Crow, Gary Johnson. He and his wife Louella were for years the preeminent bead workers and regalia makers on the Northern Plains. We were remarking about the similarities to quality beadworking and writing, that they are much the same. You have to conceive of the whole picture, stitch every space as well as the word/design, every piece of punctuation, every fill. Each letter and space is like another colored bead, row after row, building pattern, making sense until something cogent arises, recognizable, and hopefully worth the effort.”   Beads equal pixels.  I’ve been saying that for a while.

The real subject of this book is serious, a matter of justice, not just in the allotment of land as reservations in the first place, but some serious questions for all of us about how we let the stigma of poverty kill people who are blameless except for being inconvenient (especially children), how “favelas” of people using the overflow of material goods from prosperous communities will spring up again and again -- not out of degeneracy but out of necessity -- and how intransigent and miserly our governments can be.

At the same time the kinds of hardship described here are offset by family solidarity, ingenuity in the use of whatever can be scrounged, true success in stable communities when hard work meets generous opportunities, and the graceful beauty of many of the people in these photos, both male and female.  Young women sometimes in blankets and sometimes in elegant white dresses; young men sometimes in braids and clouts and sometimes in ducktails and jeans.  Always the graybeards with hats.  Always the round women with their aprons and crucifixes.  And always the children with their bright upturned faces. 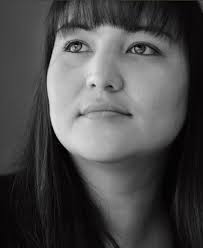 If you live around here, this book is about us -- all of us.  The book will be in the Valier Library.  Here's a vid connection if you don't read.   http://www.c-span.org/video/?315917-1/book-discussion-whole-country-wasone-robe

I'm looking for Dean Thomas LaFromboise genealogy that was provided to me several years ago by metis cousins...please respond via email tessablume1133@gmail.com