EARLY DAYS ON THE REZ (Fiction: part of a novel in progress) 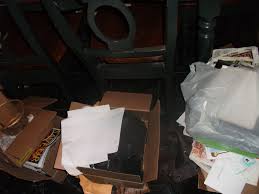 The papers in the boxes she was sorting were out of order, not like the sort of archeology dig -- let's say a buffalo jump -- where the layers are dated according to when the evidence was laid down in sediments.  She picked up papers and objects from the box that drove her memories back and forth across time.  One moment she was “just a kid,” though she and society considered her an adult with a finished degree and a certain amount of experience, and the next moment she was at the first major crossroads for a woman: would she marry and have babies or would she . . . what?

The Egyptologist’s wife she knew, who had no career but was highly educated, explained how marrying a man who would spend his life in the field meant that there would be no children because there would be little medical care and many dangers.  She could, of course, have stayed “home” or even near her parents -- a lonely, possibly infantilizing life.  “If I stayed near my parents, I stayed their daughter.  If I went with my husband, I stayed his wife.  Of course, I could simply turn away to another man, but I loved this one.  And I loved Egypt as much as he did.”

On the reservation in those days local women found their men to be come-and-go, but organized their lives around the children anyway.  Money was the problem, but they didn’t need as much as if they hadn't been tribal.  The small service jobs circulated among them.  One quit -- her cousin applied for the job.  When men came back from welding pipelines or fighting fires, maybe to the same women and maybe not, the women moved the money among them.  There was always public aid to women and children. 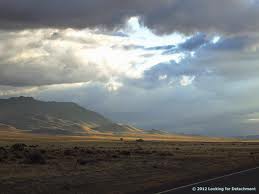 Those were two patterns and there were more but she paid very little attention to them.  Beginning in spring she lived like a happy animal, or her body did, responding to weather, food, and the cycle of the day/night while her head spun with ideas, wove ideas, made a fabric of ideas, patterned by the steady flow of people who came to see Joe, the anthropologist.  It wasn’t quite like a campus academic life, this reservation boundary-delineated concentration on what people did and how they did it, what their essential nature was, their material culture, what they thought their tribal past had been like.  But there was a steady stream of colleagues, drifters, novelists, artists, the curious. 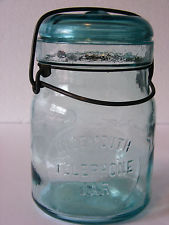 The local people went on with their lives, not bothering to think about what all these outsiders were imagining.  The sun shone most days, the wind blew dust most days, and some days were different, maybe stormy and sometimes almost blank -- just gray stillness.  Plants went through their cycles so that some days the prairie was blue with lupine and other days they were yellow with arrowleaf balsam root.  Since the people were not dependent on digging for roots and rhizomes, they no longer paid attention.  They smiled at her childlike gathering of bouquets, put in Mason jars for lack of vases.  (The jars were tinted blue-green in those days and had wire bales to hold the lids on tight.)

In recent years she had learned not to do that because so many of her bouquets were blooming weeds that she was inadvertently spreading.  She was never an arranger -- just put the handful into the jar as she had carried them, and always intended to sketch them, but often didn’t.  What she did was look them up in guide books, carefully reading the whole entries about how they were grouped, their common and Latin names, what else was happening along the curve of the season when they bloomed.

She walked.  The force logic of glacier-scraping and deposition was easy to see, though most people would have looked at the mountains on the horizon instead.  The town’s settlement, beginning in a small comfortable place and then spreading out over the low hills and marshy flood plains of small streams, had less logic though it was in squares.  A lot of draining and filling was necessary.  Some cabins had been there before plats were drawn.

In evenings she read unless there was company at Joe’s where she would go to make coffee, serve packaged cookies, and listen to the constant flow of talk through theories and stories.  She was his clerk/secretary, but also more than that -- in a proper way.  A hostess.  There was no alcohol served if the indigenous people were there, but if there were none, Joe provided brandy.  A few alcoholic scholars and writers managed to find the supply and covertly put a bit in their coffee.  The Indians added so many spoonfuls of sugar to their coffee that they were nearly drinking syrup.

They (almost always men) talked about what the old people did, what first contact must have been like, how the people dealt with the new threats like incarceration and diseases like trachoma which made them blind.  How much the old men loved silk scarves around their necks or even tied over their heads like the Queen of England to shield their ears from the wind and how much the women still love small metal objects like thimbles and buttonhooks, though not all of them sewed and no shoes have buttons these days. 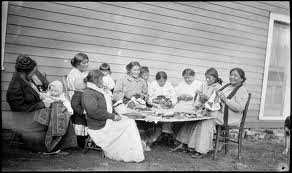 She thought about how, now that there was no need for the constant on-going handwork -- the braiding, beading, rubbing, twisting that used to be on every lap -- people didn’t quite know whether to gesture as they listened in a kind of quasi-signtalk or to pet the children and animals that always crowded around.  The little comfort-seekers climbed into her lap, too, and she accepted them.  But that was when they were in the local homes, the cabins and shacks that were partly supplied by the government, partly built in prosperous times, and partly improvised.  When they were in Joe’s place, either his public space or his private rooms, she wrote notes to type and file later.  By the time video cameras were in use, Joe was gone.  He was much older than she.  But she took the occasional still photo. 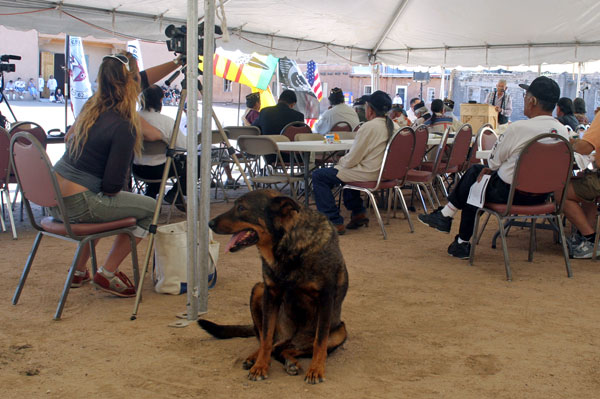 Now, as she unpacked the boxes, she would turn up little sketches of weeds and pages of notes, as varied as the Moccasin Flat houses, according to the circumstances.  "Dr. So-and-so says that the difference between Blackfeet patterns, whether painted or beaded, and Cree patterns was that Blackfeet were geometric, which he felt indicated some sort of pre-mathematics and which he tried to relate to the desert Abrahamic people’s invention of geometry", and so on.  The Cree tended to make plant-like patterns, including flowers, which indicated to Dr. S-and-S that they were concrete in their thinking, could not abstract in a more intellectual way, and harbored Euro-ideas about beauty, like symmetry.  He was a great devotee of modern abstract art. 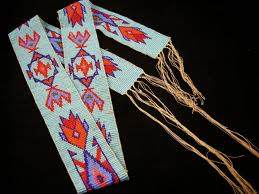 Reading this in the present, she noted in a deconstructing aside to herself that Dr. S-and-S was analyzing to a level that verged on fantasy, first in composing his values (mathematical linearity as a sign of intelligence and superiority) and second in his memory of the materials he was supposed to be describing.

When she looked at the beading she saw a lot of individuality, a lot of responding to circumstances -- that and the givens of materials.  If the beaders tended to lean to blue and orange patterns, maybe it was because the store had stocked a lot of those bead colors.  She thought about how sophisticated clothing fashions, haute couture, went in cycles, responding to what had been all the rage last season by turning away from it, and taking up something fresh.  So if green beads suddenly appealed to the eye, it was only natural that they suggested stems and leaves, which asked for red flowers.  But they all, sooner or later, went back to that blue. 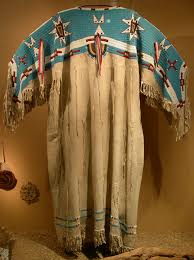 She found her sketches of beading patterns, the best of the records made with colored pencils but some merely drawn and then labeled with the names of the colors.  That was the real beginning of her art, nothing at all like the oil-on-canvas work she did now, but still the early consciousness of color and shape and somehow, the resistance to linearity, the love of surprise.
Posted by Mary Strachan Scriver at 9:59 PM

Labels: BOTH SIDES NOW: Bits of a Novel